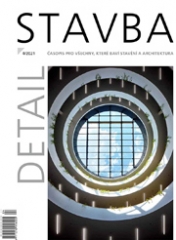 100 Kč
Profile
Schindler Seko architects studio was founded in October 2011 by the German-Czech architectural duo of Jan Schindler and Ludvik Seko. They build on their thirteen years of experience as co-founding partners of the 4A architekti studio. Over this period, both architects were responsible for many award-winning projects of residential, office, retail and hotel buildings, not just within the Czech Republic, but also in other EU countries.

Services
Schindler Seko architects' twenty-member international team provides comprehensive services. We can offer a full scope of architectural services from initial and concept design stages including the permitting process to detailed proposals for tender and implementation phases, architectural supervision during construction and the final certificate of occupancy. Our knowledge of the broader central European environment including Slovakia and German-speaking regions gives us the opportunity to offer services to local and international investors.

History
The first significant breakthrough came in 2005 during the international competition for the Rivergardens development in Prague 8 - Karlín. A number of respected European architectural offices made proposals for this new neighbourhood, from which the jury selected winning designs for each area. Schindler&Seko is currently implementing on site the office building along Rohanské nábřeží , representing the first phase of their proposal.
Schindler Seko architects have managed to build on and develop further the successful work from previous operations. The company is headquartered at Generála Píky 26 in Dejvice, Prague, right next to their most famous building, the PFF GATE.