Composed of two planes which fold to accommodate a range of distinct programs, including an outdoor plaza, two lecture halls, cafeteria and a testing facility. Planes interlock to create a single trajectory in which the entire university experience – socialization, learning, examination – is encapsulated.    The Educatorium is conceived as a new center of gravity for the Uithof University Campus. Point of departure of the design are two sheets which fold and interlock. The concrete slab is treated as a malleable surface which allows an optimum fit for each program. The sloped planes of the entrance plateau, function like an urban plaza or mixing chamber. Beneath this area is sheltered the bicycle parking and intersecting bike-path.   Above the mixing chamber is the two-story block of examination halls. While specifically planned for mass examinations they are also designed to allow varied configurations of furnishing and inhabitation.  The two auditoria are accessed via the large entry area ramp. Oriented towards the north side the larger auditorium is open to the view of the botanical gardens. Two curving walls enclose the room, one solid, one of glass. Laminated with a holographic film which changes between transparent or translucent depending on the viewer`s point, the glass wall acts as a fabricated cloud alternately clearing and obscuring the view to the outside while providing a screen of privacy for the interior.   In the ceiling, steel reinforcement bars emerge from the exposed concrete slab. Steel and concrete dissociate allowing each material to work at optimum efficiency: the 20cm thick concrete slab is made to span 21 metres.  The second auditorium with 400 seats is situated to the south. Spanning between two massive walls the roof structure is a densely packed series of I-beams forming a surface of steel.  The cafeteria is situated beneath the floor of the auditoria. The lines of columns are denser to the south and almost disappear to the north towards the landscape beyond. Designed to accommodate up to 1000 people, the sloping ceiling together with the "random" columns generates a series of "places" within the large room.  Circulation in the Educatorium is organized around a cruciform of two corridors subdividing each plan into quadrants and functioning as the main connectors. A second system of paths allows the building to function as a network. By merging the "pause" areas with circulation, larger open territories are generated as part of strategy of eliminating frontiers in favour of more subtle techniques of separation or inclusion.
OMA 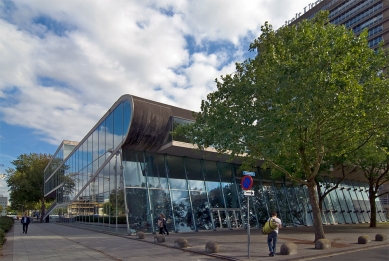 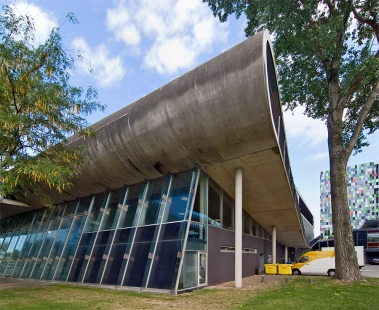 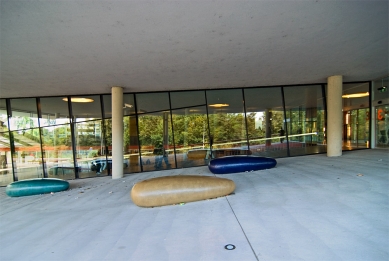 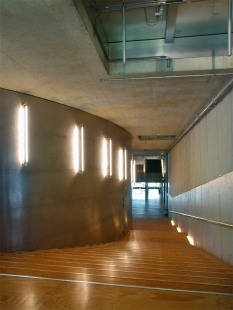 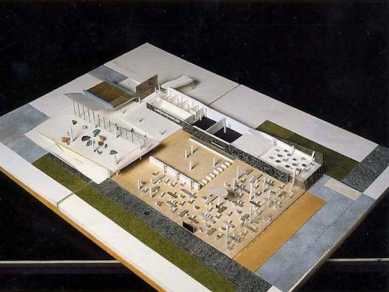