El Ravel, like many of the older dilapidated districts around the periphery of the medieval core of Barcelona, has been the focus of intensive redevelopment in recent years. In addition to the Museo de Arte Contemporàneo, by Richard Meier, finished in 1995, the new building for the Faculty of Communications Sciences of the Universitat Ramon Llull by Daniel Freixes, Vicente Miranda and Vicenç Bou, in the courtyard of the Casa de la Caridad, also completed in 1995, and urban design proposals by Cristian Cirici and others for the area south of Plaça Universitat, plans were made to upgrade the housing stock. Following the pattern of rebuilding in the historic sections of Barcelona, new housing in El Ravel is planned as incremental, parceled development responsive to the existing urban texture of these neighborhoods.

This corner site, just south of the Museo occurs where there is a widening in the street which forms a small, elongated plaza which has been refurbished and landscaped. The del Carme facade is seen as a prominent element from this space and continues the enclosing surfaces along the street. By comparison, the side street, Carrer d'en Roig, like most of the streets in El Ravel, is very narrow and dimly lighted because of the 4 and 5 story buildings which line the street. To improve the lighting conditions, relieve the confined space of the street, and improve the quality of the individual apartments, Llinàs proposed adapting the zoning envelope from a solid infill to an organization of three separate blocks rising from a two story high plinth which aligns with the street. The corner block aligns with both streets, however, the two blocks along C. d'en Roig set back from the street so that sunlight penetrates more to the interior of the block. Because these blocks are partially freestanding, this strategy admits light to windows at the sides of these elements, a move that also provides more privacy and more rooms away from the street The plinth is used for commercial space and provides a partial portico along the street that creates entrances to the apartment lobbies while extending the commercial activity along C. del Carme and down C. d'en Roig. The corner is articulated with a canted cantilevered bay window and a recessed shop entry at grade, following a long-standing typology of special corner emphasis in Barcelona. The three blocks have regular structural bays, but some of the exterior surfaces are inflected, a response to site nuances that imparts the sense of a vernacular juxtaposition of independent elements while providing some relief to the customary regularity of most social housing. The exterior walls are stucco, with structure rendered as freestanding elements at entrances and shop interiors. Full-height openings with hinged wooden shutters and integral balustrades are used for most openings so that they also function as balconies. The horizontal striations of the stucco joints and the disposition of the windows is a commentary on the existing pattern of vernacular materials, walls, and punched openings. While each block has a separate stair and elevator, the two northern buildings share a common lobby along the street. The southern block has a separate lobby at the southern end of the complex where there is also an entrance for the garage. The small, two bedroom flats are well planned and quite typical of public housing in Barcelona. Unfortunately, the exposed roof of the commercial plinth is not used as terrace or garden for the residents and there is little effort to plan the individual blocks--either in plan or section--to capitalize on the presence of an outdoor space removed from the street. 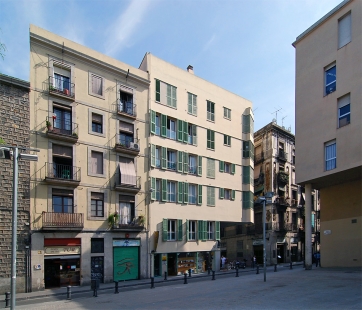 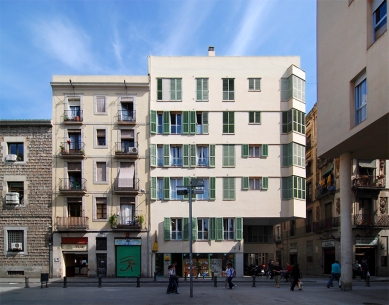 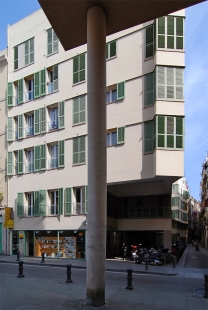 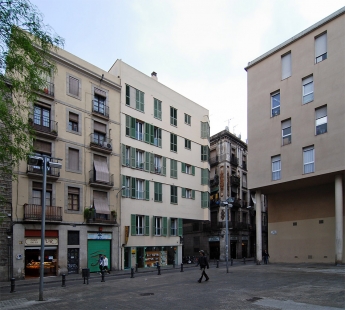 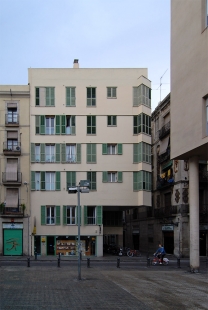 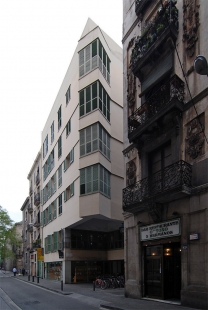 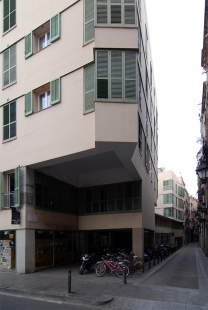 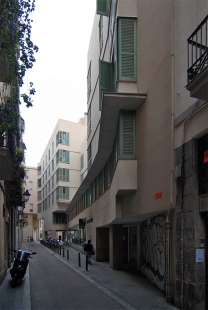 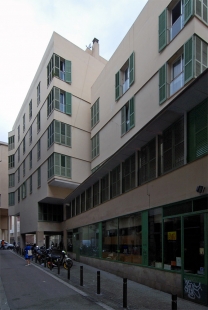 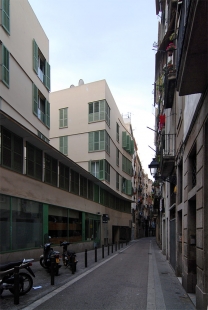 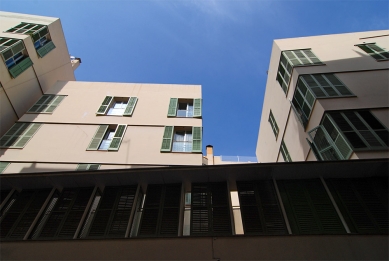 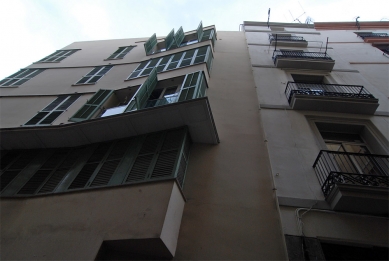 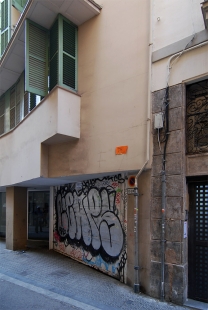 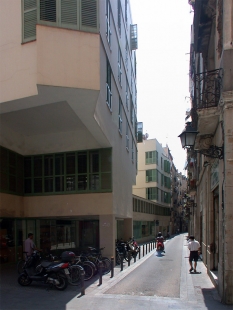 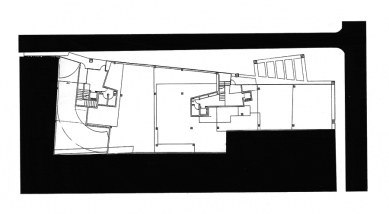 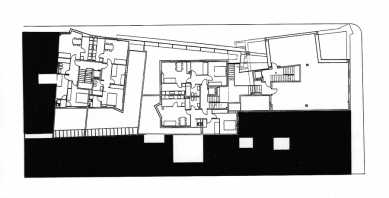