Spolupráce: 3D Sense, IPR Praha
Dodavatel: Vetamber, s.r.o.
The exhibition pursues a number of goals. On the one hand, Urbania wants to humanize and bring the world of city administrators a little closer to the public: the world of officials, public administration employees, and to alter the negative label that this sphere has. At the same time, the exhibition tries to remind public administration employees somewhat of what they know, but this time in a slightly different light and especially to emphasize that we usually know "what" we do and sometimes we need to remind "why" we do it, but most of all we neglect the "how" we do it. The main idea of the exhibition is to claim that our approach, our thinking, the way we do and approach our work, creates a kind of soft blanket, a culture of work and relationships that unites us and has a huge impact on our surroundings and our city. In this respect, the exhibition offers 8 principles of such an approach in the context of urban development and encourages debate. With short interactive vignettes, visitors become part of the city itself and witness, for example, the reconstruction of public space, the reconstruction of a brownfield with a focus on intersectoral cooperation or the transformation of an old factory into a cultural center and more. Participants become part of the exhibition by actively engaging and expressing their feelings, opinions and sharing their experiences. The aim of the Urbania exhibition is not only to educate, but also to inspire and bring closer officials and the general public in a common understanding that work culture is extremely influential, through our activities and expectations it has an impact on city development and needs to be cultivated.
T  he feedback from visitors we received was very positive, as people from all walks of life also benefited from insight into urban planning and were able to better understand the process and all its requirements, as well as identify opportunities for greater involvement. For urban planners and other professionals in the field, most of the feedback acknowledged that "their" day-to-day challenges are in a different light. The large number of visitors to the exhibition led to its extension, and the interest was shown by schools and city administration organizations from other Czech cities. Currently, several other cities, including Brno, are currently trying to replicate Urbania on their own premises.
Urbania is an interactive exhibition organized by the Center for Architecture and Metropolitan Planning, which was largely the result of Prague's participation in the Triangulum project, the EU Horizon 2020 project, which ran from February 2015 to January 2020. The Urbania concept was created by a multidisciplinary team. January 16, 2020. The exhibition was originally planned for the end of February 15, but due to high demand it was extended until March 13, 2020.
Urbania is part of an audiovisual experience, part of a platform for debate, which in an absorbing environment presents some of the typical situations associated with the development of the city. The pillar of the installation is a central projection accompanied by the dramaturgy of the spoken word of the main character URBANIA. This projection determines the rhythm of the entire session lasting for each visitor about 60 minutes. We then created eight objects around the perimeter of the hall - a kind of interactive sculpture, each of which carries its own story and message. The visitor confronts them, tries to find a way to communicate with them, and gradually the essence of the eight principles of planning, administration and development of the city is revealed to him, which, however, affects us all.

T  he ambition of the exhibition is to provide each visitor with a unique and individual experience, which is why the teaching framework E-U-R, evocation, awareness and reflection is important. In order for the visitor to be absorbed in a completely unique world and first to have an emotional experience, where he is partly an actor or a very close observer in eight stories, but then the city asks him how what is discussed in the stories concerns the visitor himself, ie. ideally, there is a kind of reversal of the experience into the world and the experiential framework of the individual. Specially trained Urbania guides always take part in the exhibition with a group of eight visitors, then lead a discussion and a debrief between the visitors. In the final phase of the exhibition, there is a controlled debate with all participants and the visitor has the opportunity to articulate their impressions and opinions. Visitors provide guides with instant feedback on the experience during the discussion and are also asked to fill in a feedback form, thus closing the whole experience to some extent and ideally leaving the visitor to some extent with the experience spent. Urbania is accompanied by a photographic installation throughout the city, which prominently displays photographs of civil servants and their actual citations, which aim to challenge the often negative perceptions of public sector employees.
The URBANIA installation is conceived as a set of interactive LIVE SCULPTURES creating the illusion of an imaginary city. Each of these sculpture is composed individually with its own story presented mostly in a multimedia form. The composition is framed by large-scale floor graphics referring to the city's organism.
The installation is conceived as a theater stage without the classic interface of an auditorium and a stage. The visitor enters to the installation at a specified time and becomes a part of all acts, helping to co-create them. The central visual point is a large central projection indicating the light and content rhythm of the entire session. The central orientation and communication element is the audio component of the installation - a dramaturgically carefully elaborated performance telling the story of URBANIA itself.
T  he individual acts are accompanied by various light scenes of the control system. The same control system also starts and controls the audiovisual component.
The layer itself is formed by an interactive system of light voting rays which influences the visitor himself and which intersect the entire area of the ceiling of the space.
V  isiting each of the above sculptures requires a degree of interaction and involvement from the participants. He drives a bike, makes a phone call or climbs up the stairs to the VR viewpoint with a telescope for the future of the city. The individual statues are entered in various ways and they are also a parallel to urban furniture.
The sculptures are made of plate material and steel tubular profiles. Various AV devices such as screens, projectors or speakers and headphones are integrated into the sculptures. The sound quality is monitored by an installed 16-channel speaker system. The installation is controlled by a central computer.
RSAA 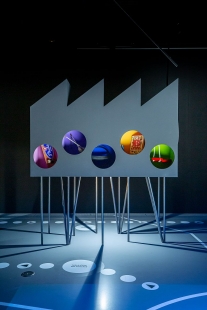 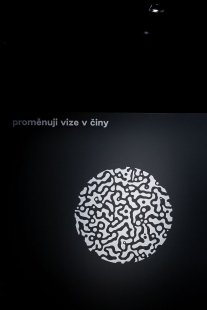 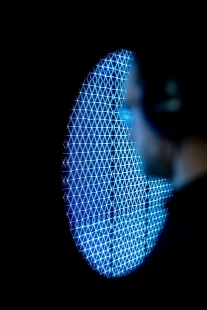 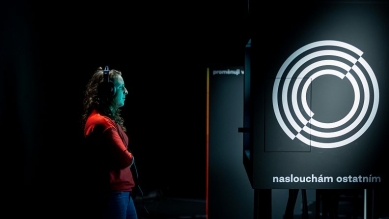 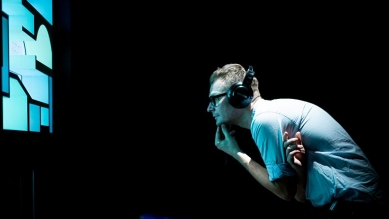 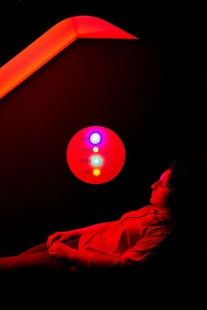 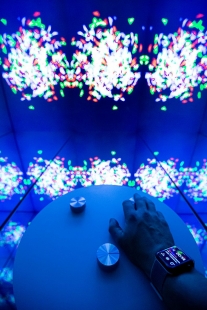 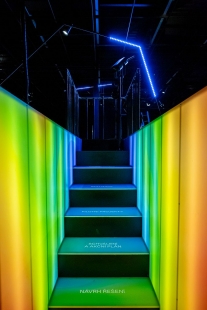 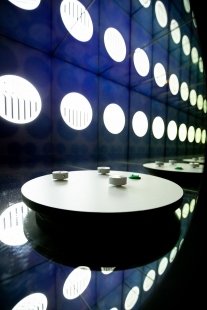 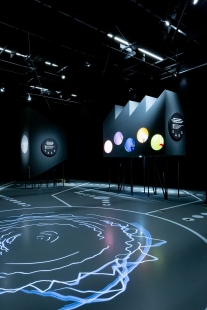 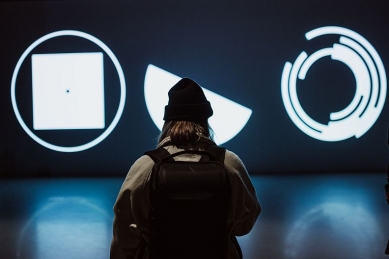 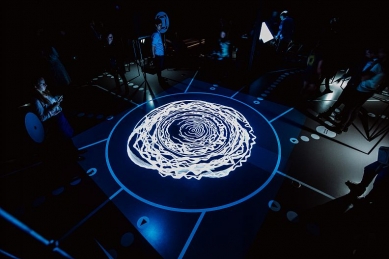 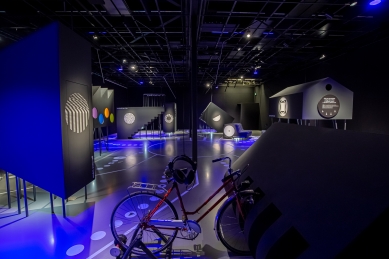 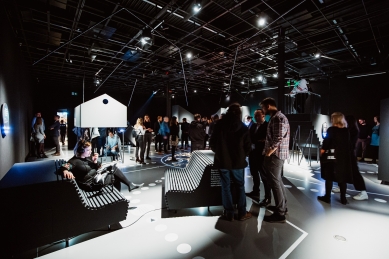