Disposition - The designated spaces are located on the sixth floor of the multifunctional building DRN. The appearance of this building in a prestigious location on Národní třída was defined by the architect Stanislav Fiala. The dominant function of the building is administration, but there are also restaurants, shops and galleries. Significant features of the designated space from the very beginning were: an atypical floor plan, supporting load-bearing columns in a diagonal slope and a glass facade with a 360 ° view. Spectacular view combined with plenty of natural daylight and an organic floor plan make this place unique. The task here was to create an office background for Manifesto and reSITE company. Due to the specific character of the building itself, the space did not allow large structural interventions. The division of the space responds to the organic shape of the building and tries to maintain its airiness. Upon entering, you will be greeted by a so-called "welcome wall" inspired by the company's identity. The custom-made multifunctional wall serves as a reception and, on the other hand, as a cloakroom with seating and storage space for administrative needs. In the entrance area there is also a kitchenette with a large dining table. The office itself is made up of elongated desks for almost 30 people, two meeting rooms, and a dominant lounge area with tiered seating for meetings and creative dialogue of the entire team. Call place - in the original plan it was a cell used for private calls, which should not disturb other colleagues and ongoing meetings. The total office area is about 270 m².

Concept / colors / materials - Great emphasis was placed on preserving and enhancing the qualities of the space as such. That is clarity, variability, brightness and airiness. The basic elements: concrete on the ceiling and load-bearing structures, glass facade, installations and metal floor tiles, thus remained without significant changes, on the contrary, their character was underlined. In contrast to predominantly industrial materials, finer organic materials based on textile and wood were also chosen in the design. Oak plywood was used at the stage, welcome wall and cloakroom. Light textile was used in order to achieve the highest possible optical and acoustic comfort for continuous work. The division of the space with the help of textiles also made it possible to work with round shapes inside the space, which again underlines the organic character of the interior. Lighting and other accessories are designed in white or anthracite color, which draws no significant attention to itself, but conversely contributes to the overall harmony. 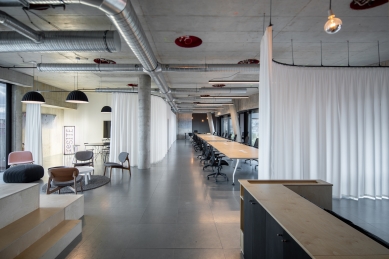 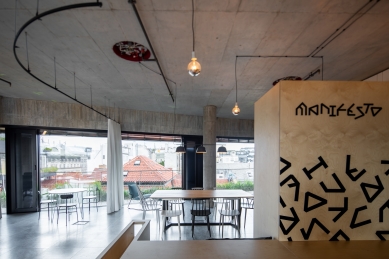 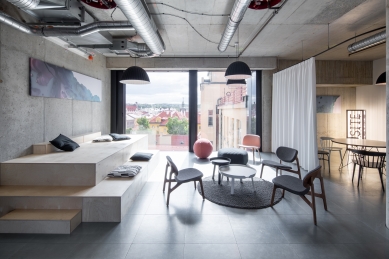 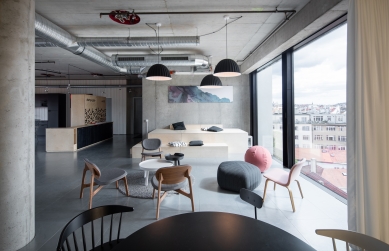 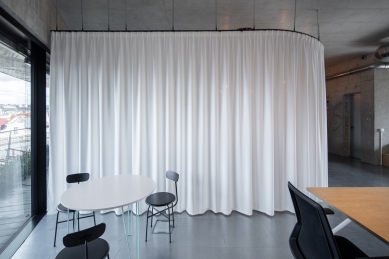 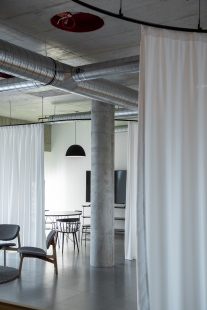 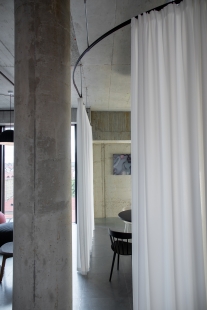 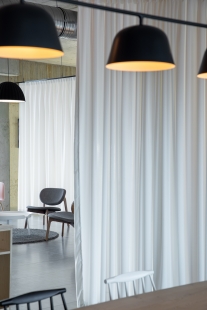 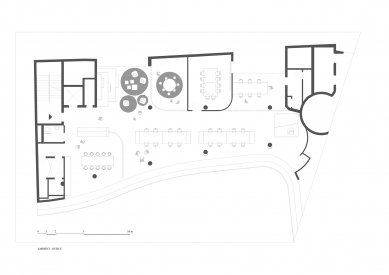