Spolupráce: Architekti Šebo Lichý, Ateliér Architektura III UMPRUM
Stavební inženýr: František Denk
The structure has been designed to meet the client request upon an object, which positively complements and enforces public space of a newly erected neighborhood. The green area at the outskirts of Bratislava has been transformed into an urban block with various playgrounds, terraces and meeting places. Located on the roof of the apartment complex, the structure provides a clear iconic orientation point for the area.
The structure can resemble an abstract drawing, a cloud or a silhouette of a grove on a hilltop. The design transforms an uncertain shape through a regular orthogonal grid. Glossy metal surfaces create a spectacular play of shadow and light. While red lines contrasting with the light surroundings, create an illusion of a two dimensional drawing, only a moving observer notices the three-dimensional character of the structure.
The object can be considered a reference to a list of iconic, avant-garde or utopian projects, such as La fièvre d'Urbicande by Peeters and Schuiten, Parc La Villette by Bernard Tschumi or Sepentine pavilion by Sou Fujimoto.
The structure consists of 130 identical segments, each being an orthogonal three dimensional cross made of welded 60x60mm steel beams with square cross-sections. The segments are bolted together and can be re-assembled in various configurations. 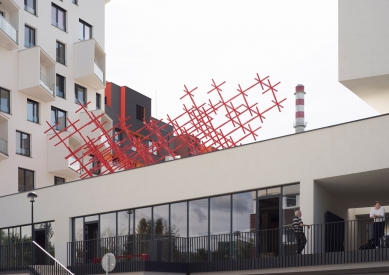 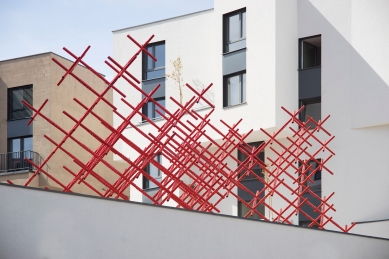 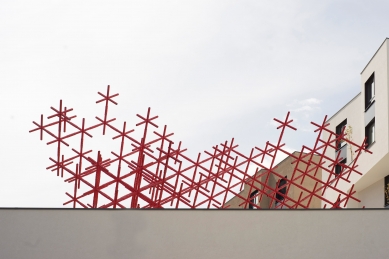 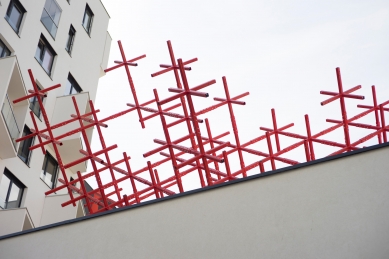 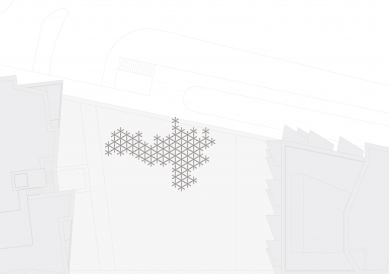 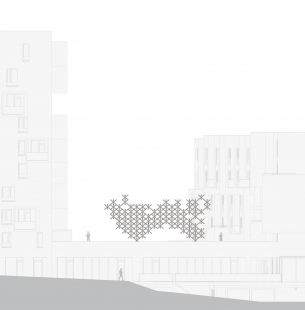