Our competition concept was the idea of a natural integration of the jewish center into the structure of the city through public space. Its public nature and openness can be experienced in a succession of squares, paths and passage-ways between the buildings and in their neighborhood. Community center, the chief synagogue and the Jewish Museum of the City of Munich are a balanced ensemble , in their own autonomy formulated and across their spaces correlated.
The synagogue, as the main building, is oriented towards east and stays free in the public space, with an closed stone base and a filigree glass steel construction, rising form its center. While the base reminds metaphorically of the temple Salomons , staying symbolically for the constancy, as a portative shell surrounding the prayers room, the metal mesh, glass and the construction network of the lantern relates to the filigree, portative “Stiftszelt” and the construction disbands in the transcendency the light.
The Jewish Museum of the City of Munich as the smallest cube communicates between Synagogue and community center, takes up the duality of the synagogue and invert it in materials, an introverted cube for the exhibition and a glazed ground floor. In the tension between fragility and mass, between openness and compactness, the building of the museum has its own independence and weight beside the cubes of the community center, and especially beside the base of the synagogue. The structure is planned as a public meeting and exange place, as a mediator among the tree buildings on the square.
The volume of the community center is fragmented in different cubes. The extensive space and utilization program had to be organised, with two undergrounds floors and six upper floors housing the youth – and cultural-centers, event rooms, dining facilities, school, daycare for children and administration offices. The center is expressed in the differentiated buildings and materials, which establish relationships.
The travertine is used in different shapes and forms: undressed natural stone, surrounding the base of the synagogue, polished stone at the museum and cut slabs are reflecting light and shadow on the facades and around the patios at the community center. The materiality with different structure of the surface until the detail planing show the principle of coherence and autonomy. 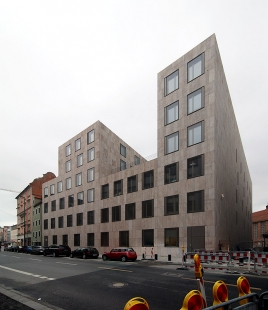 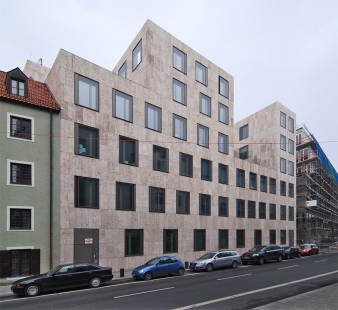 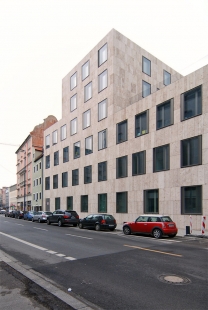 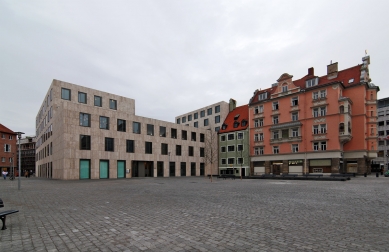 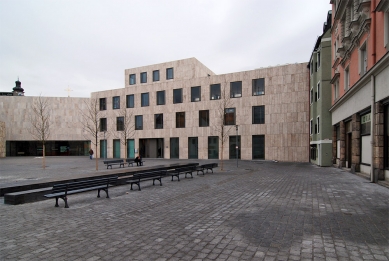 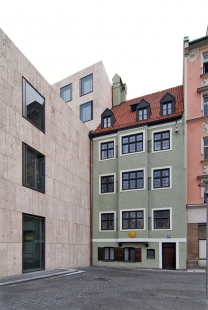 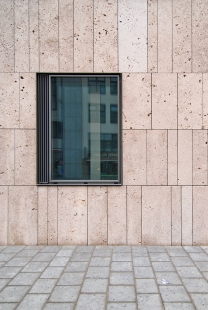 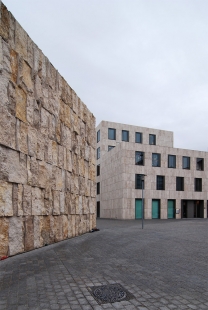 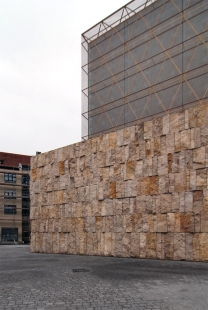 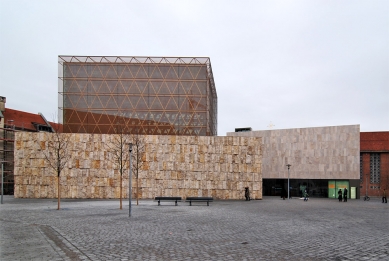 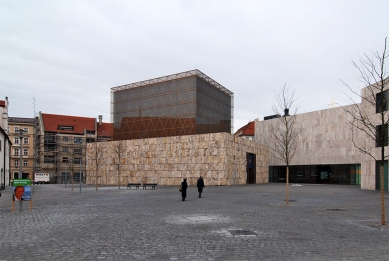 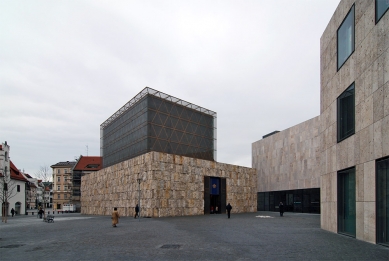 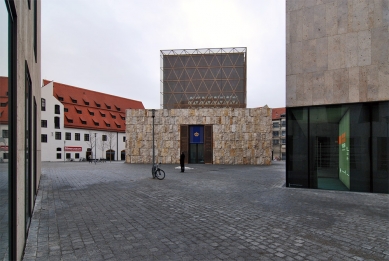 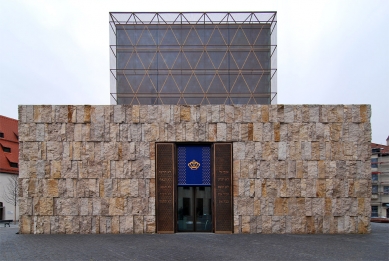 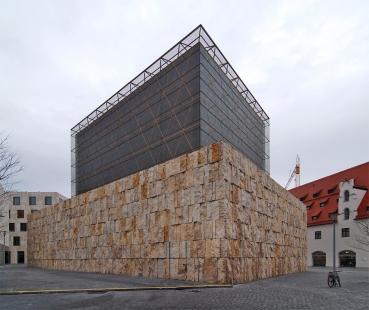 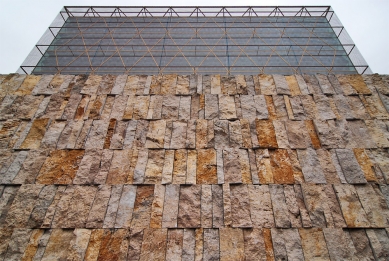 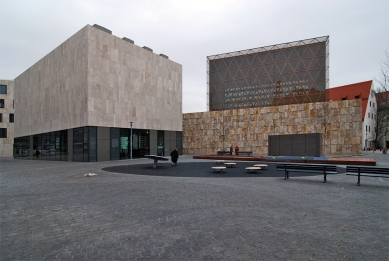 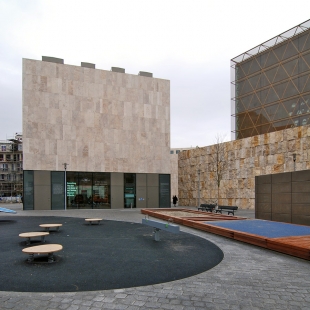 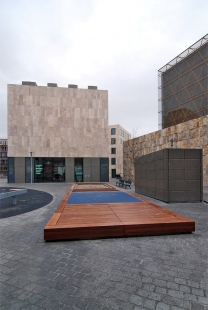 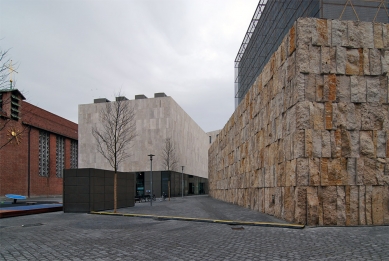 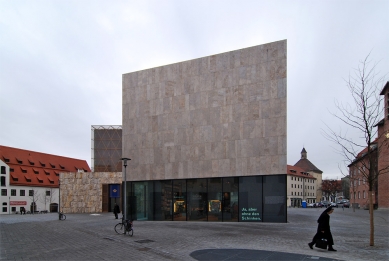 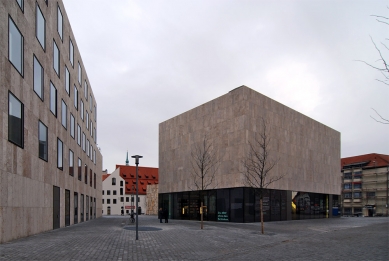 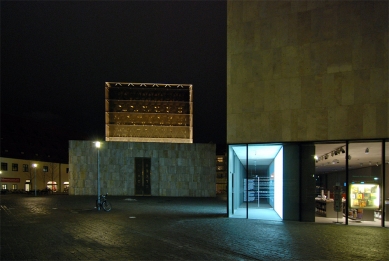 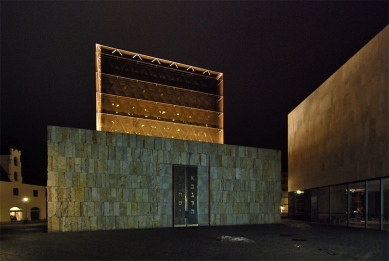 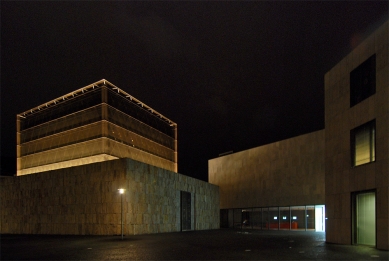 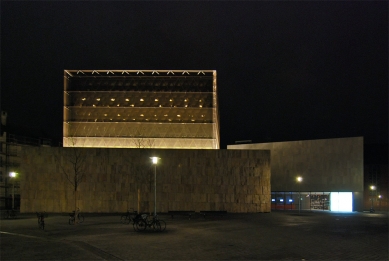 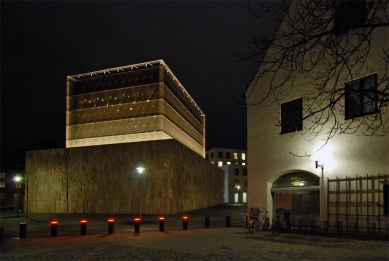 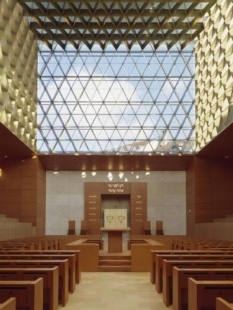 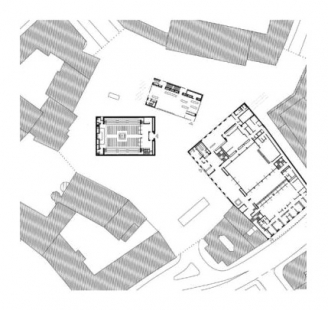 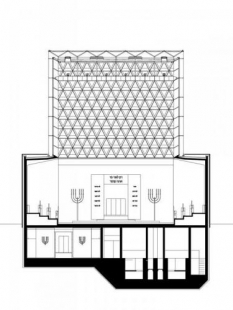