Designed by Foster and Partners, the Queen Elizabeth II Great Court transformed the Museum’s inner courtyard into the largest covered public square in Europe. It is a two-acre space enclosed by a spectacular glass roof with the world-famous Reading Room at its centre.
In the original Robert Smirke design the courtyard was meant to be a garden. However, in 1852–7 the Reading Room and a number of bookstacks were built in the courtyard to house the library department of the Museum and the space was lost.
In 1997, the Museum’s library department was relocated to the new British Library building in St Pancras and there was an opportunity to re-open the space to public.
An architectural competition was launched to re-design the courtyard space. There were over 130 entries and it was eventually won by Lord Foster.
The competition brief had three aims: Revealing hidden spaces, Revising old spaces and Creating new spaces.
The ￡100 million project was supported by grants of ￡30 million from the Millennium Commission and ￡15.75 million from the Heritage Lottery Fund.
The Great Court was opened on 6 December 2000 by Her Majesty the Queen.

Her Majesty Queen Elizabeth has today opened the Great Court, a spectacular covered square at the heart of the British Museum.
The grand courtyard at the heart of the British Museum was one of London's long-lost spaces. Almost immediately after its completion in the nineteenth century, the Round Reading Room of the British Library was built at its centre and it was gradually filled in with buildings to house the ever increasing collection of books. Without public access to this courtyard the Museum lacked a focus it was like a city without a park. Our project is about its rediscovery.
The relocation of the British Library to its new building in St Pancras, in March 1998, presented an opportunity to recreate the Museum's courtyard in the form of the Great Court. This two-acre space is now the hub of the building, providing access to all parts of the Museum. The British Museum now has forty per cent more public space than it did two years ago, which has solved a host of problems for one of the world's busiest museums. The Great Court creates a range of new facilities, which will equip the Museum for the twenty-first century. These include galleries and exhibition spaces; state-of-the-art auditoria, education and study rooms; shops and restaurants. They are essential to the museum's ability to welcome its ever-increasing stream of visitors, now numbering more than five and a half million each year.
The first step in the recreation of the Great Court was the demolition of the undistinguished post-war buildings that served as bookstacks around the drum of the Reading Room. The southern portico, which was demolished to enlarge the Museum's entrance hall in the 1870s, has been reinstated to a new design. The other facades have been restored, requiring more than 6,000 square metres of new stonework.
To allow the Great Court to be used no matter what the weather, it is covered with an undulating glazed roof. It has no visible supports to detract from the restoration of the classical facades around it. Instead it spans the gap between the facades and the drum of the Reading Room as a self-supporting structure. The undulating, minimal steel latticework supports 3,312 unique triangular glass panels. Each one is different in size and shape because of the roof's complex geometric form, which results from the fact that the Reading Room is not exactly in the centre of the Great Court, but is 5 metres closer to the northern portico. A specially written computer programme was required to work out the exact dimensions and angles of each panel, each of which has been sponsored by an individual or company.
The Great Court is a major new civic and social space for locals and visitors alike and we hope that it will become a popular rendezvous for those who live or work in the neighbourhood. With two cafs on the main level and a restaurant above, it is possible to eat in the Great Court from early in the morning until late at night. Newspapers and magazines will be on sale at the new bookshop; and for the first time in its history the magnificent Round Reading Room, with its dome greater in size than that of St Paul's, will be open to all. It houses a new public library concentrating on World Cultures and taking advantage of the latest technology. Sculpture from the Museum's collection will be on display in the Great Court and in March 2001 a specially commissioned sculpture by Anish Kapoor will be unveiled in front of the Reading Room.
The new Clore Education Centre and the Ford Centre for Young Visitors is housed below the Great Court. There are lecture theatres and seminar rooms to meet the needs of the Museum's expanding education programme. There is also a major new exhibition space, the Sainsbury African Gallery, part of a bold plan to return the whole department of Ethnography to the Museum. The creation of these new facilities has gone hand-in-hand with an operation to restore the Museum's historical spaces and to reveal the full splendour of its original architecture. This has included the accurate reinstatement of the original decorative schemes of the Reading Room and the main entrance hall.
The Great Court creates a new shortcut through Bloomsbury as part of a continuous pedestrian route from the new British Library, the great railway termini and the University of London, in the north, through to Covent Garden, Trafalgar Square, Soho and the River. The Great Court will be a focal point on this route. To complement the Great Court, the Museum's forecourt has been freed from cars and restored to form a new public space. When the Great Court opens in December 2000, London will gain a public space of international significance, open to all. 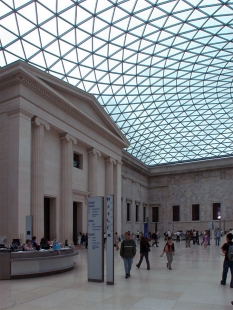 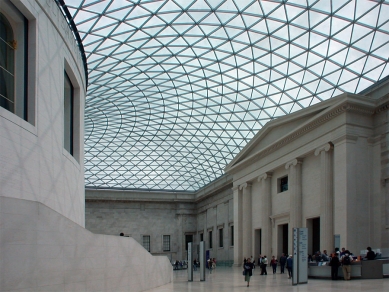 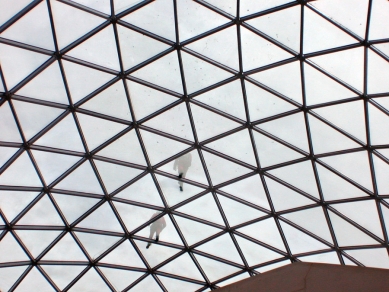 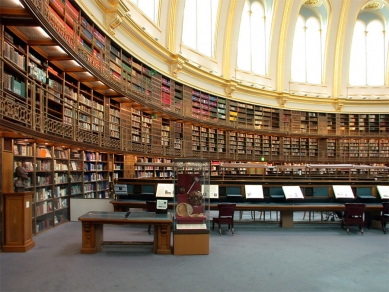 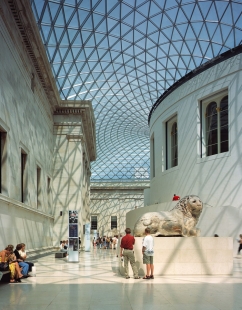 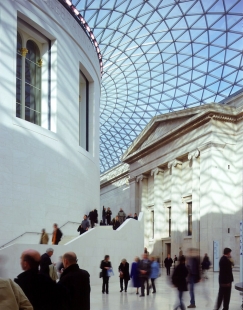 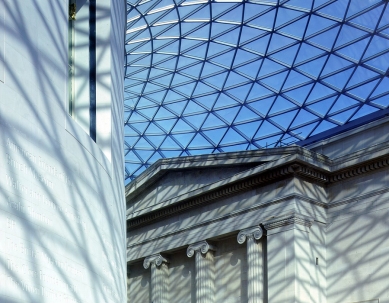 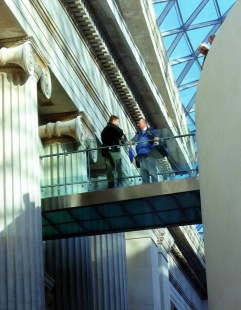 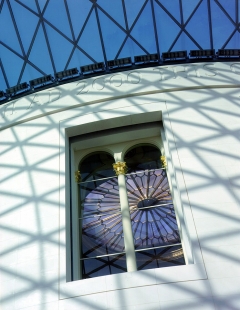 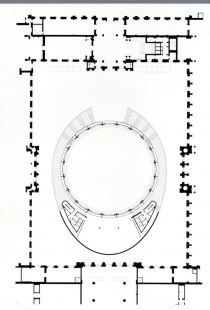