The new Hall F is an ingenious addition to the previously less developed southeast side of the monumental complex of Wiener Stadthalle, creating impact even on its own. The concert, show, dance, fashion and even circus venue sits 2,000 spectators. Furthermore, congresses and conventions can be facilitated. Even though the location is particularly appealing in terms of urban development, the new edifice does not steal the spotlight from Roland Rainer's hall, which was built half a century earlier.

The Wiener Stadthalle is rightfully referred to as a monumental structure, having been completed in the post-war era of the 1950s. Roland Rainer designed not only a huge building in terms of a linearly enlarged house, but rather a gigantic structure that interprets the dimensions of the huge volume adequately, while leaving its own imprint on the urban fabric.
Built based on the winning entry in a competition, the edifice was erected on a site critical for urban development; Hall F delineates the space and defines the adjacent street patterns and squares. Dialogue with the monumental building is facilitated and entertained in a sophisticated manner. The rationally and densely fashioned complex was laid out into a geometrically precise volume and maintains its clear concept even in plan view. Its east front, facing the Gürtel stands out ca. 12 m, forming a canopy above the entrée. The front can be used as a projection wall and is closed off, while the receding flanks are fully glazed. They enclose the foyers used during intermissions. While the south elevation extends parallel to Hütteldorfer Straße, continuing and mending the urban fabric, the symmetrical north side is positioned close to the sloping supports of the auditorium and additional bevelled elements along the grand hall; thus entering into an interesting dialogue with skew edges and lines. In terms of height and instrumentation the new structure follows the lead of its older counterpart. The architecture is rather discreet and the smooth aluminium cladding maintains sufficient distance to the profiled sheet metal of the grand hall. Its south façade faces the sun and is reflected in the glazed wall, while the illuminated foyer opens up at night to enter into a dialogue with the space below the suspended tiers of Rainer's structure. Amidst such conflicting tendencies not hard contrasts achieve optimal results, but a rather well-calculated approach to volume and respectful distance. The interior is clearly structured by short pathways and direct access routes: The spectator appears to be drawn into the foyer, inside the wedge-shaped space below the auditorium. Two wide staircases on both sides lead to the foyers used during intermission, whose inclined floors follow the orientation of the auditorium tiers, making stairs unnecessary. Floors and walls are clad with robinia, an extremely robust material of dark and warm appearance. The foyers open up widely through glazed walls, providing insight at night like giant window displays.
They reveal happenings inside and enliven the adjacent public space. The auditorium features nuances of light red. The spectators are not divided by levels; only a wide catwalk separates the tiers, forming an extension of the stage. The VIP area is located in the rear end of the building, where short stairways lead to lounges in the back of the grand hall. Acoustics equipment generating short reverberation times ensures ideal sound quality for various events. Thus, excellent sound is provided and sound engineers are given room to experiment. Staircases lead to different levels of the backstage area, whose walls are painted in light green, complementary to the red auditorium. They are ideally structured and provide quick access for deliveries. The rear sections of the building are outfitted with rehearsal and banquet halls, such as used for conventions. They are directly accessible from the foyers. One level above, a tract houses administrative and production offices. 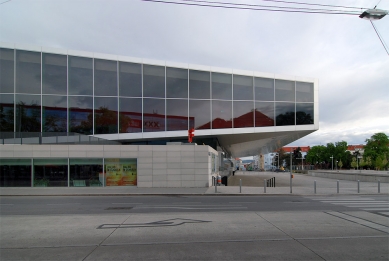 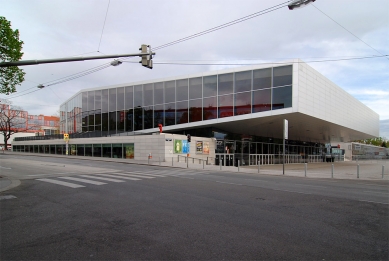 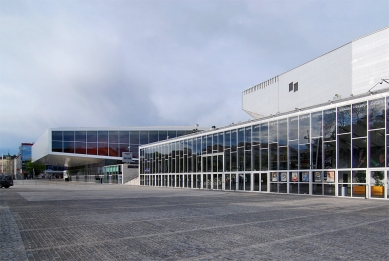 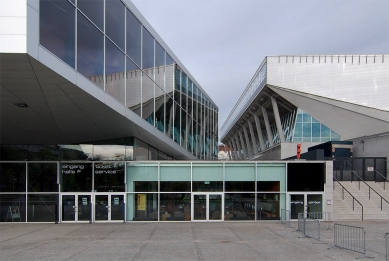 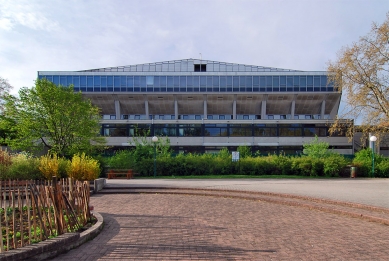 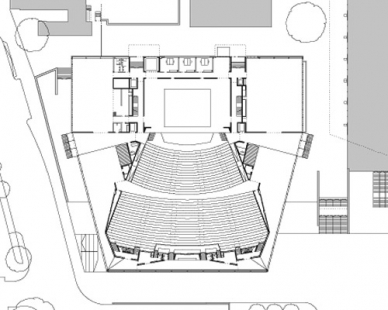