Entrance to the Architectural faculty of Venice university

During the restoration of the Venice architectural faculty in the Tolentini monastery, a gateway of Istrian stone was found. At first it was thought it might be used as the entrance to the faculty. When Scarpa was given the project, he did not think of this »natural« application. He wanted the gate to be used not as an entrance but displayed as a museum piece. After this had finally been decided, Scarpa brushed up the symbolic content of the gate, duplicating its allusions, and placed it in a web of cross-references, charging it with meaning as he often did with exhibits.
The old gate ha become a metaphor of the entrance, quite deliberately removed from its original function. It lies in a pool of water in which steps down to the bottom from a lively underwater landscape.
The wall which was to enclose the little Campo dei Tolentini in front of the faculty was also rejected by Scarpa. The solution he proposed was to separate the structural from the architectural function. The wall encloses a small courtyard from the outside, but from the inside it almost disappears and become a part of the ground.
Scarpa designed theree entrances, the first in 1966, the second in 1972. His last project, never completed, further developed the preceding ideas, and occupied him time and again during the last two years of his life. For the entrance construction I have relied on the second draft project, which contains a number of notes, as well as drawings intended for submision to the city council.
The wall to the left of the entrance contains the gate and supports a broad canopy to protect people from the rain while awaiting admission. The gate is a sort of scales in unstable equilibrum balanced on a wheel. One side consists of a heavy slabs of Istrian stone bearing a quotation from Vico:  »versum ipsum factum«. The other side closes the entrance with a steel-framed glass sheet. A second wheel balances the gate and adjusts its movement. 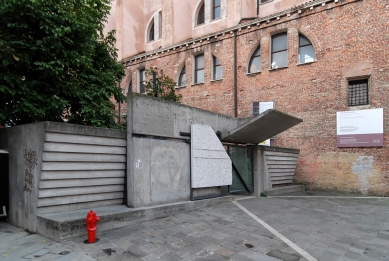 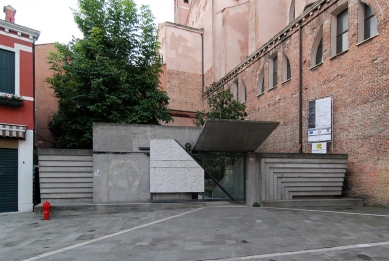 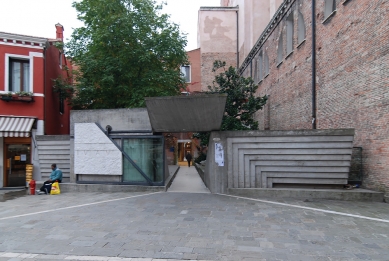 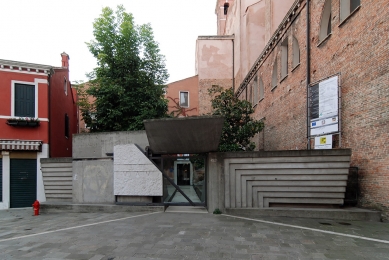 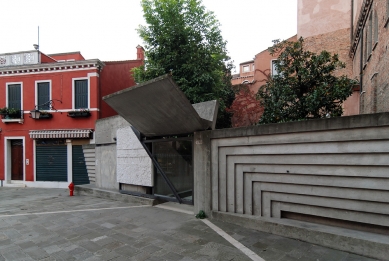 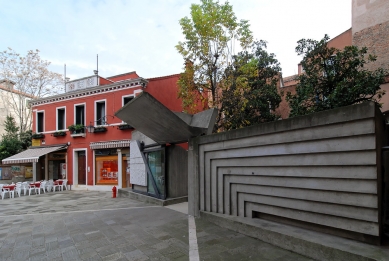 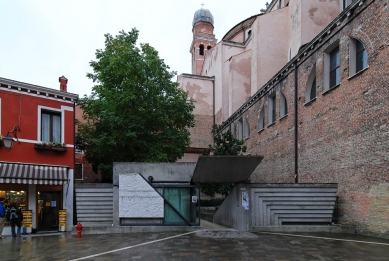 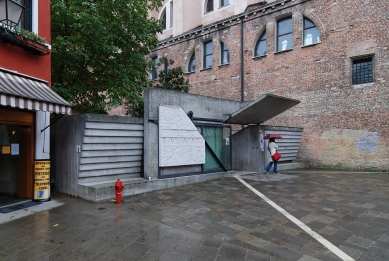 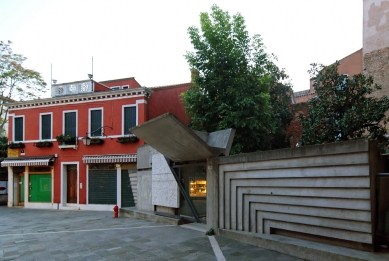 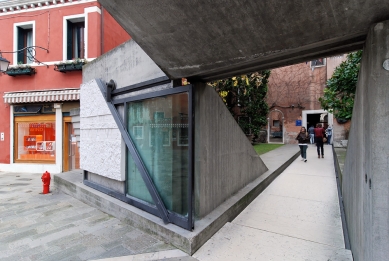 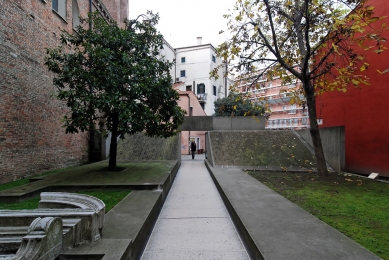 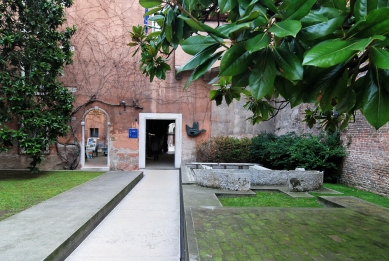 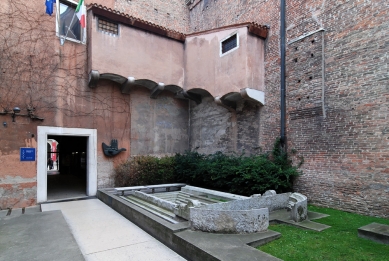 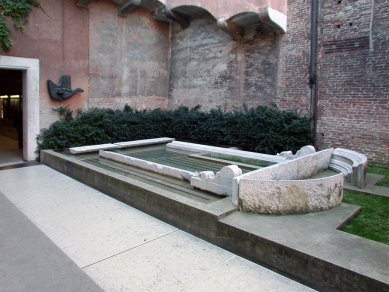 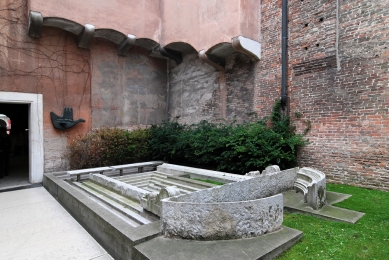 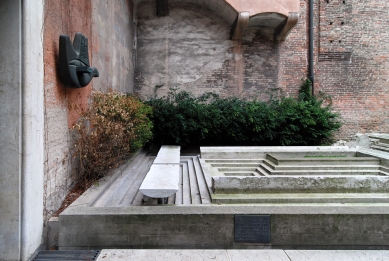 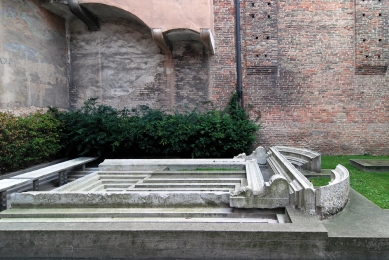 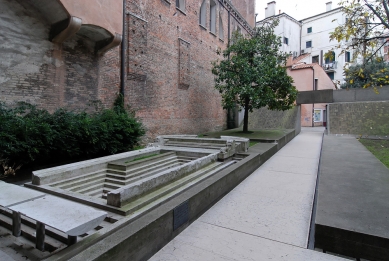 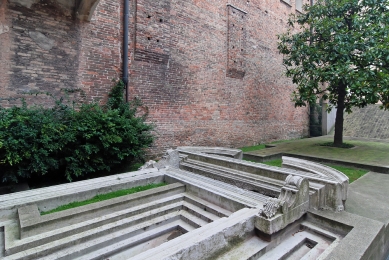 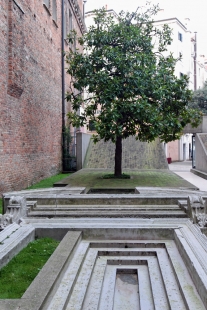 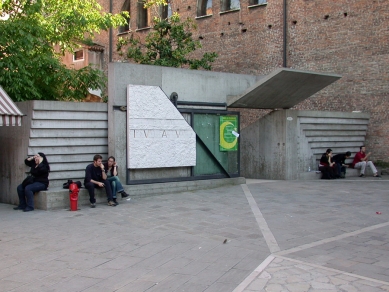 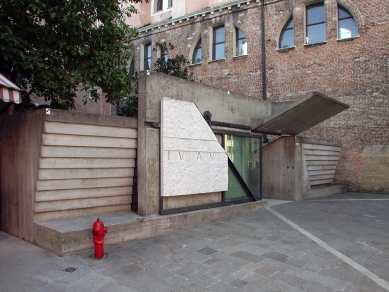 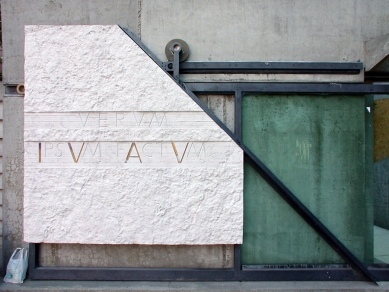 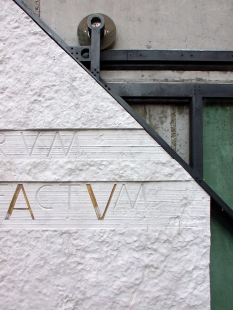 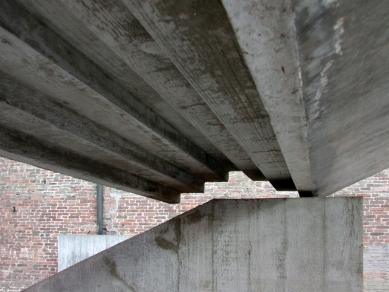 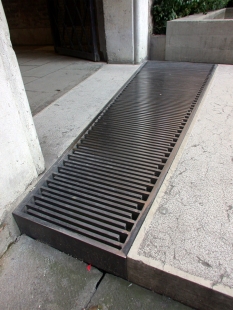