Nursery in the park

The Nursery in the park supposes the realization of a long demanded endowment by the oldest District of the city.
The growing needs of the kids schooling, together with the upturn in the birth rate, make the care and upbringing of children, a priority that the City Council of Zaragoza has managed to solve.
Space requirements, both program and playground, common in schools operated by the City Council of Zaragoza made it difficult to find a suitable performance area in District of Old town.
Located on Echegaray and Caballero Avenue, within the current San Pablo’s Park and annexed either to the facilities of the Montes Headquarters and in the proximities of the Ebro river, the school is situated in a suitable environment to collect the kids meeting with the education.
All the Ebro’s banks location must consider the channel fluctuations and adapting the construction way to the most restrictive position, and placing the base of the building above the flood level that would be in five hundred years (T-500).
Likewise, the specific modification of the general plan allows the development of a new Kindergarten; we do not forget its location at San Pablo’s Park. Thus, the plan is built respecting the size of the arboreal species and integrating them in its development, through courtyards and laying out the access and courtyard with the nature.
It shows all in a deep respect for the environment, as one of the teaching values to the children as new members of our society.
The scale of the housing blocks of Echegaray and Caballero Avenue, as well as their location on a depression area compared to the elevation of the avenue, the next Europa Square or the viewing terrace of the Forestry Engineering, make the cover the most visible surface of the building and one of the most important façade of this. That is why, as in other local schools also co-designed by Santiago Carroquino, a vegetable cover is adopted as leather upper, benefiting not only its aesthetic qualities, but also thermal and acoustical improvements it generates.
It is envisaged therefore continuity between green roof and park annex as generating elements of visual and environmental quality to the building block of a neighborhood that offers her face to the reclaimed banks of the Ebro River.
With the same idea has been considered a building that generates environmental comfort and does not have to neglect the environmental excellence criteria. Thus, in addition to the green roof have been used other mechanisms of bioclimatic architecture: double walls thermal inertia (interior-exterior), solar panels for heating and domestic hot deck and ACS, carpentry with thermal break, control of sunlight, etc.
The position of the mass tree with more poise and neighboring hills building mark the implementation on the site, accessed by a brief appearance at Echegaray and Caballero Avenue, and developing the program in directional and orthogonally way to the river.
The façades that generates volumes clearly respond to their contents and interior possibilities, closing block services as well as the bedroom area, and opening to full extent of the classrooms to the park area.
This last façade is the most significant of all because it tries to condense the essence of the implementation of a children’s cultural program in a green area, combining subtle transparencies with carpentries of arboreal formalization.
While the Kindergarten appears like an organic piece, it nevertheless has left the prefabrication as a control method and the speed in the execution of the work.
The façades have been modulated according to the main element, the translucent polycarbonate plate, with a 50 cm dimension that conditions the whole development and the other carpentries.
Inside the 1,20 meter elevation applied to the heights in all rooms define the boundary between the space adapted to the child and the adult. This mechanism of the existence of a line of permanent “level” to 1,20 m will be crucial in the building life by fixing the position “not accessible to children”.
The consideration of the material up to 1,20 m as baseboard, clearly reflects the cleanliness and ease of maintenance standards that are used.
The educational program is oriented to the future park set on four modules: multipurpose room, and spaces for those aged 4-12 months, 12-24 months and 24-36 months. Articulating the entrance as a union of all of them and acting as a barrier in respect of housing blocks, it is placed a battery of adjacent areas, offices and facilities for the well functioning of the school.
Another feature of the project is the versatility and multifunctional use of the classrooms. These are separated by mobile partitioned systems that enable the union of the two classrooms of same age in one, making possible a suitable alternative educational program for more students. The changing rooms, bathrooms and bedrooms have adapted to the standard classrooms as well as to merging these classrooms into one to provide a well functioning in both cases.
The inner ends are different as they are placed below or above the level of 1,20 m. The partition base is kind of plasterboard applying over it a safety grass end of 3+3 mm (glass is considered as a large tile, easily clean and not breakable) in the children’s space.
In damp rooms (bathrooms, changing rooms, kitchen, stores and so on) the elevation rises 120 to 210 (120+90) to define the perimeter that is able to get wet, in which it applies stoneware of 10 x 10 cm.
The Kindergarten has been designed from a paternalistic approach in which the defence against foreign hostility is transfer into tenderness focused light in the interior, focused to the projected and playful courtyard.
Last but not least, across the wording of this project has wanted to play with a romantic childhood memory of the architects drafters of the project. The story of Pinocchio and his passage inside the whale has been the leitmotiv of the volume composition. 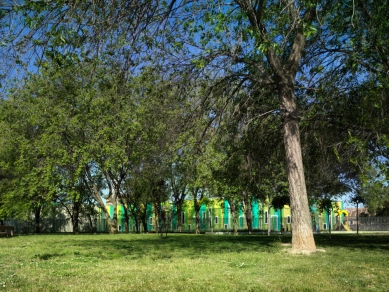 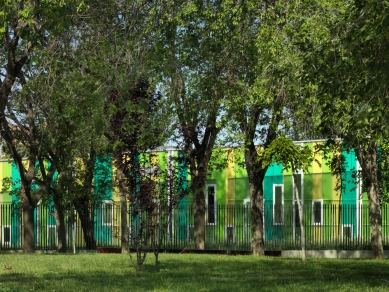 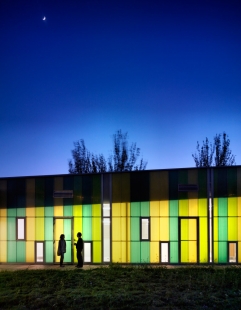 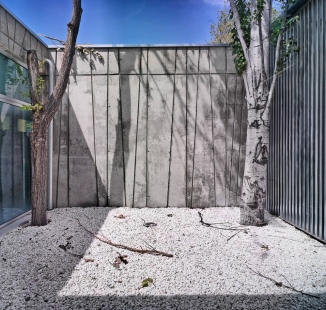 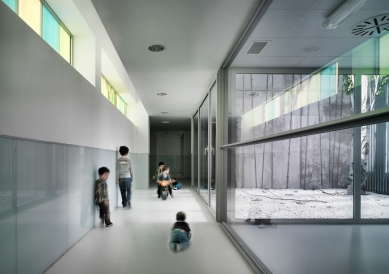 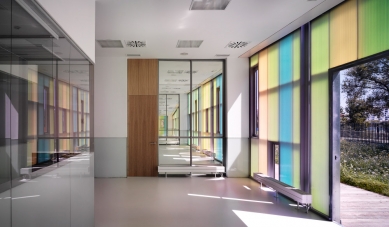 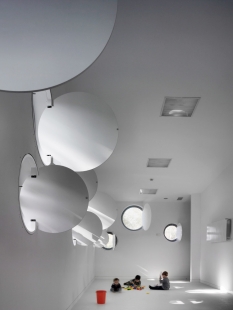 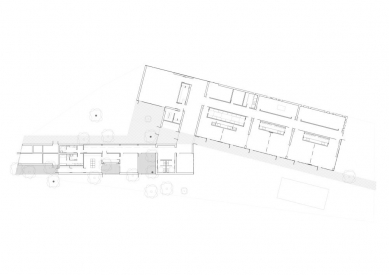 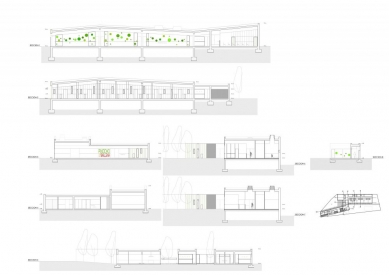 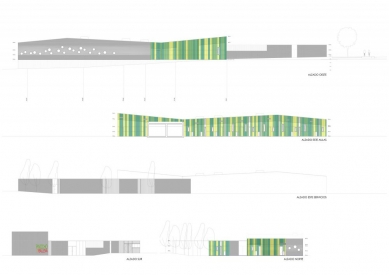 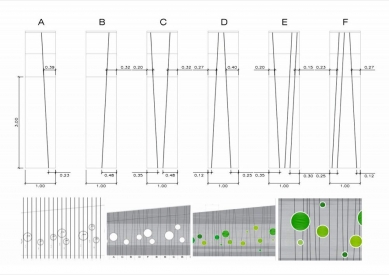 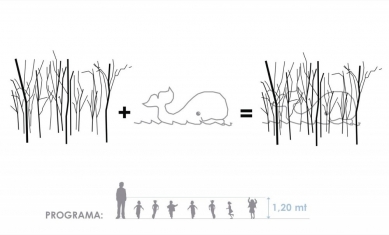