Residence for elderly people in a 19th century Villa

176 eshop.czk
The Cognacq-Jay couple amassed an immense fortune in the business of large department stores and in the French capital tey raised some memorable buildings such as La Samaritaine, which stands today on the shore of the Seine River, by Pont Nuef. Like many other 19th century business people, the couple devoted part of their earnings to philantropic activities, extending their legacy through a foundation that carries their name is in charge of the management of a maternity, a vocational training school, a museum of Fine Arts and a retirement home, all still running.
Locate on Rueil Malmaison - a small town to the west of the French capital – the retirement home takes up a 19th century neo-Gothic mansion that used to be a boarding school for girls and convent before it started its current activity as a residence for elderly. Deteriorated by time and obsolete before the demands of public health and security of current laws, its installations have now undergone a process of remodeling that has doubled its capacity. So as not to alter the scale of the house within the park, the extension of the building has been carried out with a volume of the same geometry and dimensions which lies parallel and is joined to the old one by a threestory gallery that houses the entrance and the main circulation spaces. This operation has allowed to open up the ground floor leaving rooms for daily activities, restaurant, library, beauty parlor, assembly hall, etc., and gather the bedrooms and healthcare areas on the upper floors. The resulting H-shaped scheme blurs the presence of the building amongst the trees, defining between its main wings an area of access to the southwest and a courtyard to the northeast limited by a series of existing arches.
The mimetism pursued by the volumetric layout leads to the distancing in the constructive definition of the extension, where contemporary techniques and materials are predominant. In the new bedroom building, the glass blocks conceal the thermal insulation on the opaque parts of the facade, evoking with the grid of the supporting steel frames the stone ornament of the windows of the old mansion. Searching for transparency, a glass curtain wall wraps the gallery that links both beroom wings, with a superimposed skin of silk.screen printed glass slats which protects the southern facade from sunlight. The wooden pavements of the interior counteract the coldness of the enclosure. 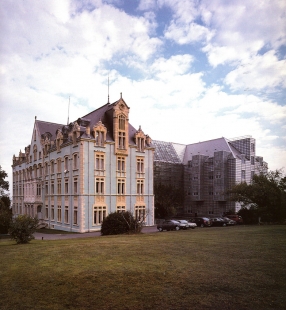 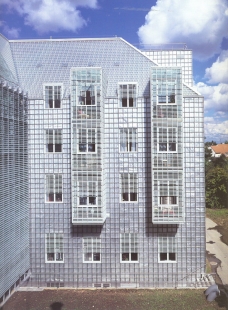 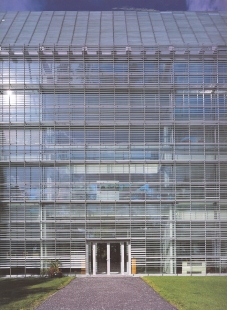 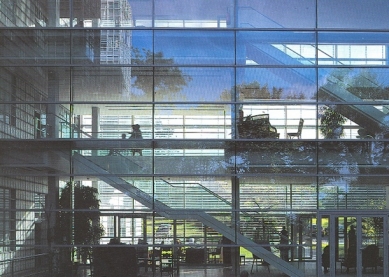 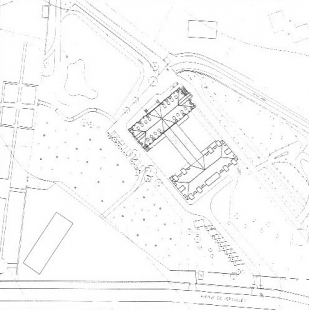 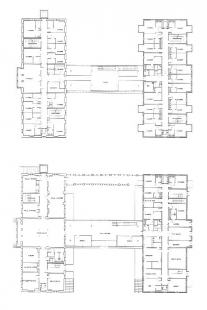 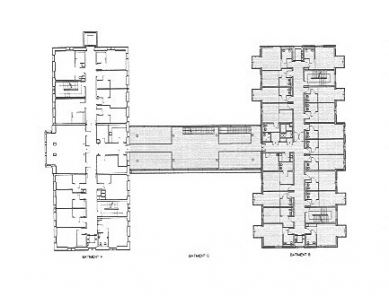 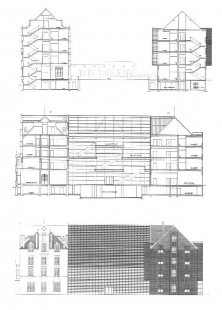 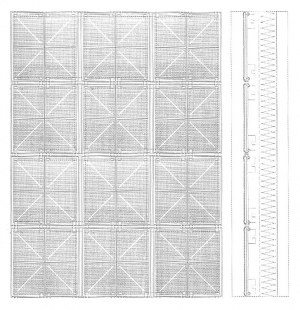