Dutch studio Benthem Crouwel Architects was chosen unanimously by the jury to design a new residential project in Prague, a plan they presented together with local architecture firm RA15. The competition was organized by Penta Real Estate, whose slogan is “creating better spaces.” 160 candidates registered, with 44 of them participating in the finals and 5 of them competing in the final round. The jury was particularly impressed by the winning proposal to integrate a large, publicly accessible park in this project.

A green heart
The new residential complex will be located in the Nádraží Žižkov area in Prague. The plot for the project takes up a unique space that lies between a former freight station with abandoned train tracks (which will be developed into a green zone), and a more urban and lively city landscape. The design presented for Residence Nádraží Žižkov strikes a perfect balance between functionality, human scale and contact with nature. By placing the apartment buildings right at the edges of the plot, a large space opens up in the middle. This space is used to create a public central park that brings nature into the architecture and into the lives of the residents.
The park is embraced by two large, curved apartment complexes that together accommodate more than 450 dwellings. The park is open to both residents and locals from the adjoining neighborhoods and functions as a communal space for people to connect, relax, and enjoy the outdoors. A biodiverse environment where local species and plants can thrive, free of cars and noise pollution, it’s a highly valuable addition to the area.

Unity in diversity
The architectural concept of shifting and stacking modular units creates a visually interesting landscape of facades, while making optimal use of daylight and giving all apartments great views. Though the buildings are home to a large number of apartments there is a strong sense of place and atmosphere: it feels friendly, recognizable and relatable, and each apartment is identified as a private, independent home.
The modular system and repetitive architectural design break the large buildings down to a more human scale, where the buildings are experienced as dynamic volumes with a variety of proportions. From the urban scale of the highest façade, that stands out as an impressive landmark, to the more personal and lively atmosphere of the small shops near the north entrance, the complex has many faces yet is perceived as a unity.

A modular building
The modular efficiency and straightforward design principle make it possible to create a variety of apartments in different sizes, accommodating the request to cover a large spectrum of potential residents. Residence Nádraží Žižkov offers its residents the best of both city and nature: highly functional apartments with optimal access to urban amenities, privacy within a community, and a lush, welcoming green park right at their doorstep. 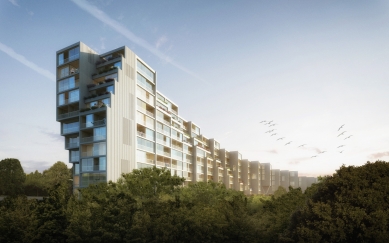 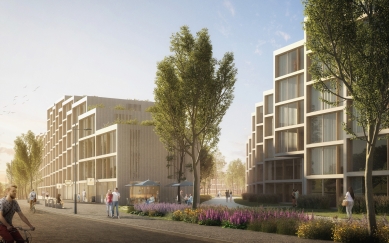 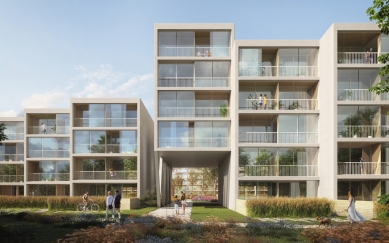 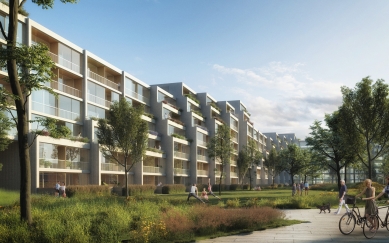 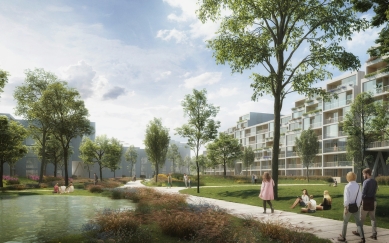 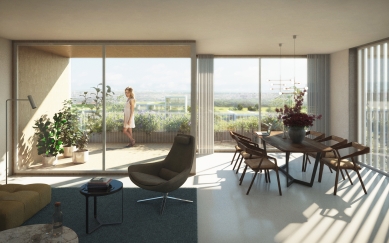 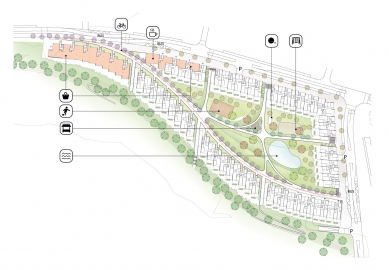