The Idea Factory
The first thing that attracted our attention when we contended for the interior architecture design of the Terán/TBWA new headquarters in Mexico City, was its slogan: “The Idea Factory”.
These three words certainly inspired quite a challenge among us, but, on the other hand, they also meant we could base our proposal with no preconceptions at all. The task of designing the ideal creativity-oriented space was really stimulating.
Because of its boldness, our proposal attracted the client’s attention from the very start. The plan to literally demolish an area (being this a rented space), to build a three-level central atrium, entering the elevators through the intermediate level and using stairs to go from one level to the next, was undoubtedly risky, but certainly different and original. Our proposal was self contained, which is instrumental to the dialogue between freedom and movement.
Once the project was approved, we wondered how to materialize our interpretation of the current production system. We immediately started our research on the workings of an advertising agency. Together with the staff of Terán we analyzed each area, trying to understand the different ways they interact.
We were asked to create a central element that infused strength and identity to the agency, a “totem” of sorts. Our proposal was an asymmetrical column of superposed wooden boxes, each with independent movement, and a digital screen, forming an element that travels vertically through the central opening, communicating and blending in the users’ state of mind through images and sounds.
Movement and flow in every possible interpretation are a fixture of creative advertising agencies, which is why we gave wheels to all the furniture and equipment, such as desks, chairs, file cabinets, doors and meeting rooms. True to form, we named the meeting rooms “boxes”––good for concentrating and creating as if inside a magic cube––, allowing work groups to integrate without wasting time.
In order to do this, we had to free the floors of every possible obstacle (such as plugs), which led us to create a central data column hanging from the ceiling--semi-covered by natural MDF planks, with generic, changeable branching. The planks may be unscrewed for immediate access, and each of these branches flows into the brain––the Site––. We materialized this idea of a central brain to which every branch ultimately connects to by locating The Site in a central area, contained by a glass box exposed on every side.
We wanted open spaces, free from clutter, so we designed hidden file cabinets and storage closets. We achieved this by using the outer perimeter of the central circulation nucleus of the building, since it is a central location accessible for all users. We covered it with blackboard where people can draw. This idea complemented the environment and hid the file cabinets and storage facilities.
We were asked to create a “Think Room”, where people could isolate themselves to think, a sort of “idea container”. After analyzing our options, we concluded that, since a CD/DVD case is “a digital information container”, we could use them as bricks for our room, which led us to mount over 23,000 cases to form walls that make a reflection shelter. The “Think Room” name lights up when someone is inside.
The main meeting room is made out of folding and sliding panels, turning into an open area that blends into the library and the main lobby, contributing to create a large meeting space where the agency’s staff may come together.
Once we had the general layout, we asked the customer to help us generate a graphic image to add as part of the environment. With the cooperation of their creative team and with a specific graphic design project, we covered every column in the building, increasing their proportions and getting “light boxes” that turn into spontaneous images as a result.
The few remaining walls may be modified with the impulsiveness of a marker, since they are made of glass or whiteboard panels.
The cafeteria has a large sofa that invites communication and that continues outside, as part of the terrace.
These options are new, fostering a relaxed and teamwork-oriented environment.
The fact of being a firm that was basically oriented towards residential architecture and that had never carried out a project such as Terán’s, gave us a creative advantage to tackle the task from a fresher perspective. Our work was also lighter given the constant support and communication flow with the agency, which led us to achieve our common objective: creating a work environment that was modern and full of proposals, with its own personality and identity, fostering creativity, both independent and joint. A new “Idea Factory”. 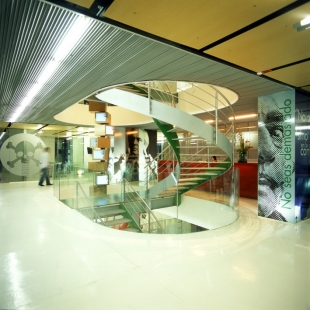 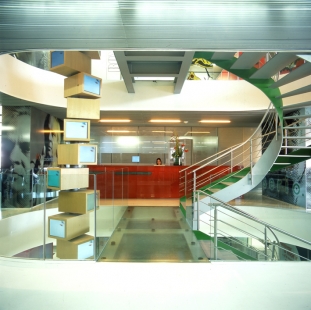 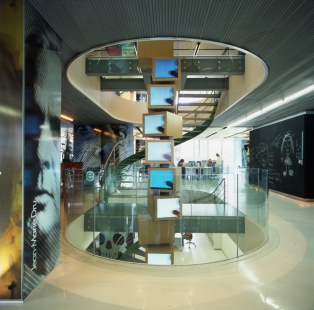 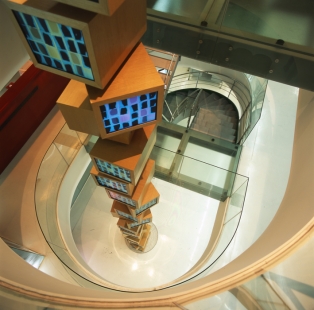 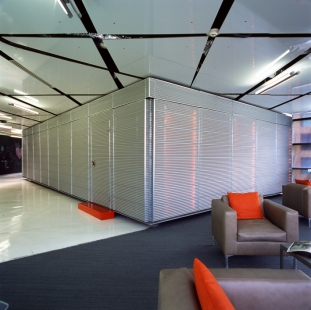 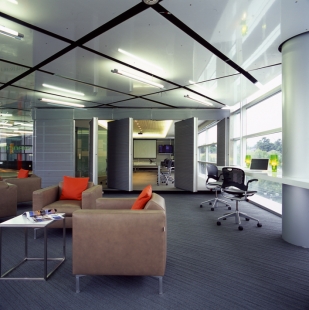 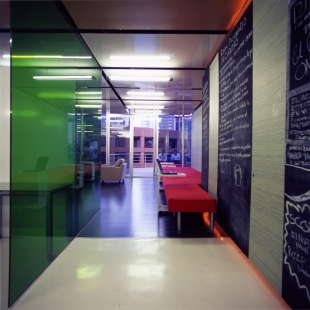 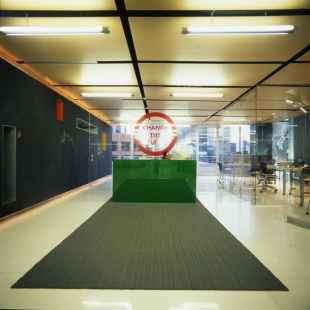 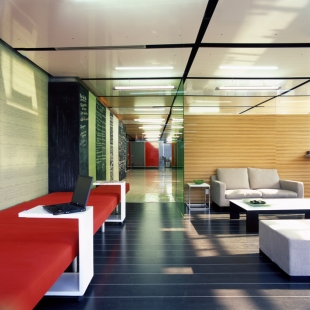 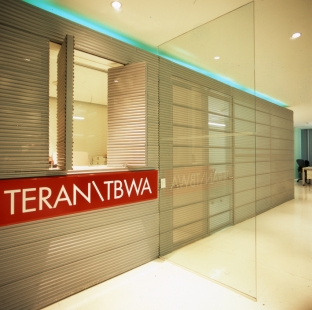 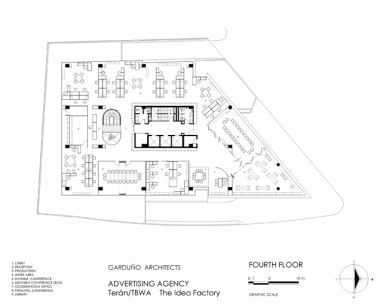 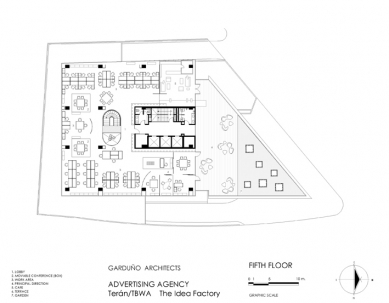