The two grids that organize this complex are derived from the outline of the wedge-shaped site, situated between Kalvermarkt and Turfmarkt. The surrouding urban fabric is structured according to the same divergent, but orthogonal geometry.
This continuos structure, maesuring 800 feet by 250 feet, includes a council chamber, a city wedding room, a central public library, and a large number of local government offices. The elements of this mega-facility are combined with a semi-independent rental office building at its northeastern end and extensive shops throughout the ground floor. The main twelve- and ten-story horizontal office slabs, which diverge from each other at an angle 10 1/2 degrees, flank a large, internal atrium that forms the new res publica of the city known as the Citizens Hall. This large, wedge/shaped hall's entrance is either from the center of the city at the northeastern end of the site, or from the historic core, where one enters from a plaza at the western end of the site. The vast room is modulated by two tiers of aerial bridges linked to the elevator cores.
The main library, with its concentric semicircular plan, is the head building at the extreme northwestern corner of the site, where its dynamic form imparts a strong character to the principal plaza at this point is a furniture store that will be rebuilt and expanded beneath the library. The plaza extens into the library where there are a reception/orientation area and a cafe. From there, entrance to other floors is stricly organized. Frrestanding escalators provide circulation between floors, and as in the City Hall, this sequence progresses from the more publicat grade to more private, administrative services at the top.
Throughout the building, open office space is in a reinforced concrete, intercolumniated structure with loadbearing cores. Inside and out, the structure is clad in white, 90 x 90 centimeters porcelain-enameled metal panels.
The glass roof of the atrium is supported by free-spanning laminated timber trusses incorporating sun screens, maintenance walkways, and light fixtures. The aerial bridges spanning the atrium, together with the elevator and stair cores, are of white painted steel, the lightness and elegance of which is intended to give the impression of a light subtly subdiving the large volume.
The northeastern plaza, which is more intimate than its southwestern counterpart, serves as the quiet back yard extension of the atrium. From the larger, urban standpoint, the complex is linked, along the Turfmarkt, to the central station by a connection that is reinforced by a canal and a line of sycamore shade trees running parallel to the sidewalk. 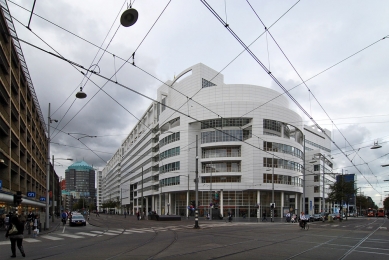 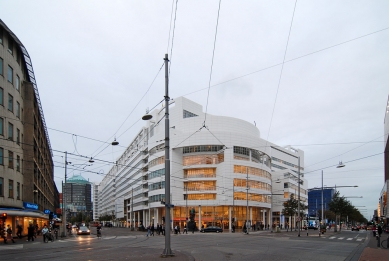 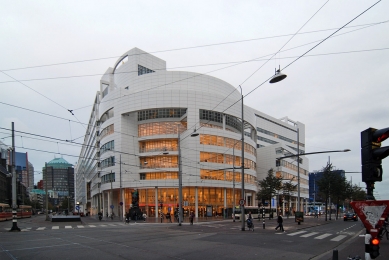 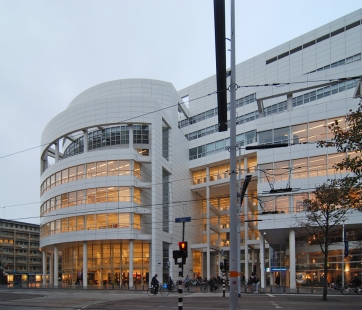 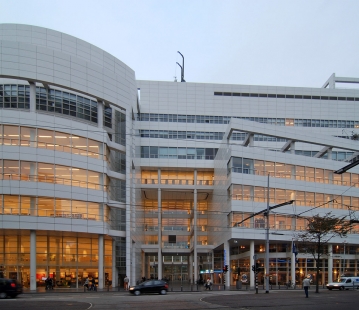 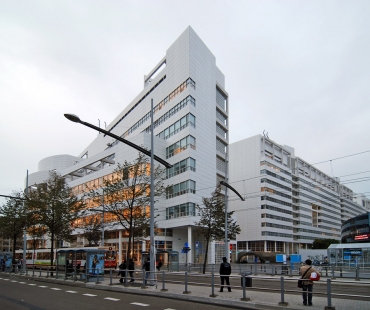 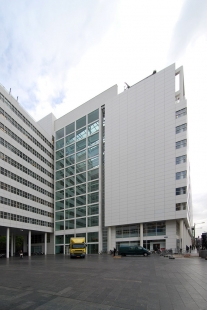 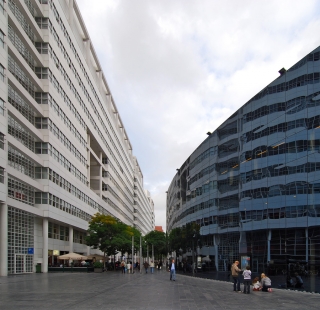 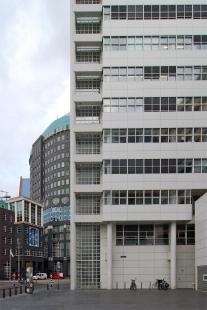 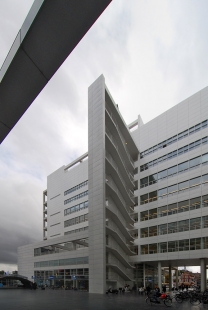 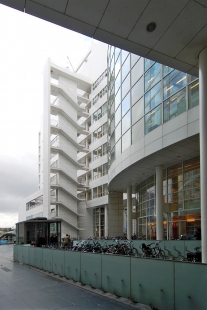 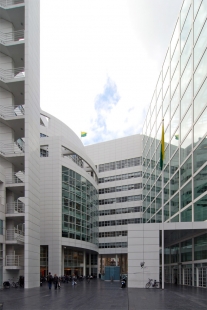 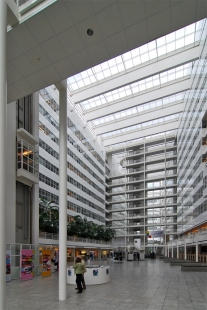 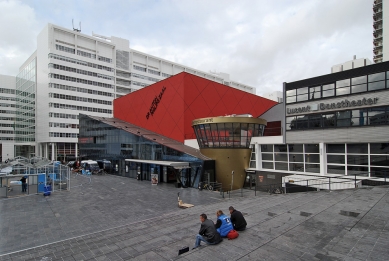 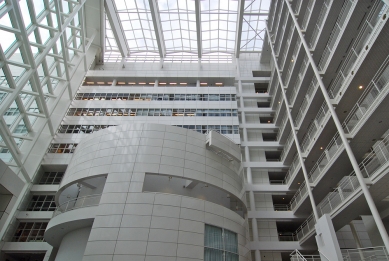 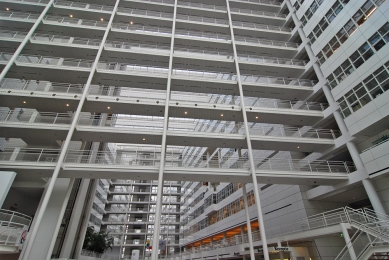 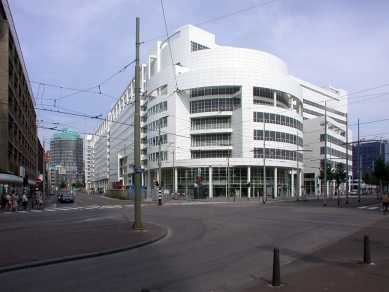 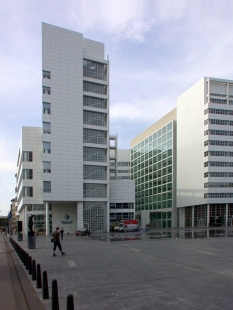 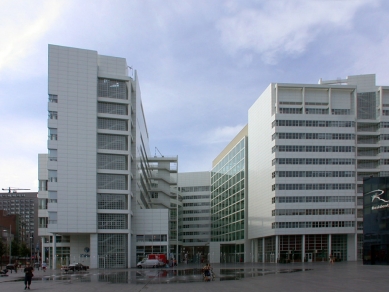 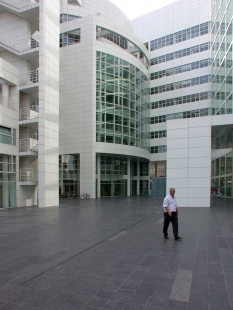 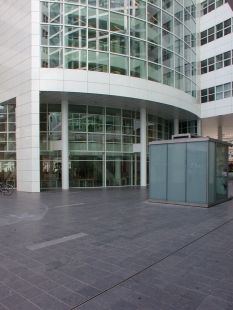 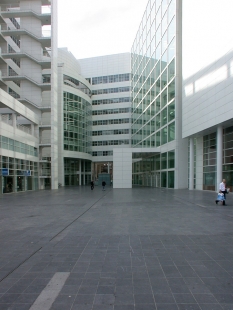 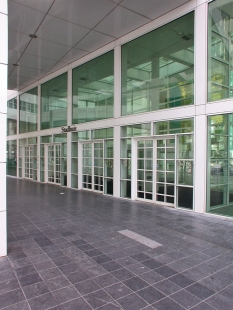 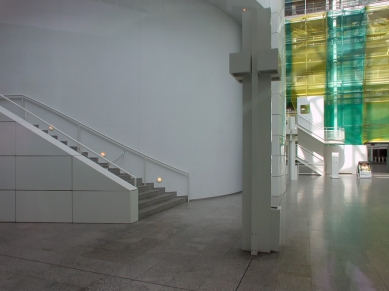 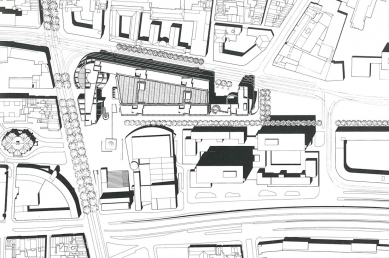 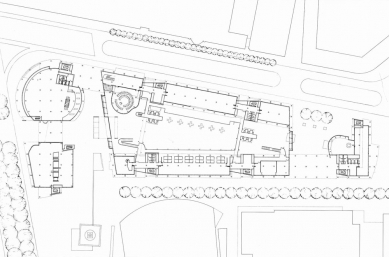 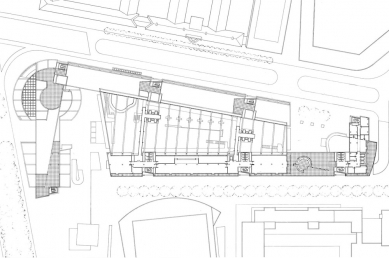 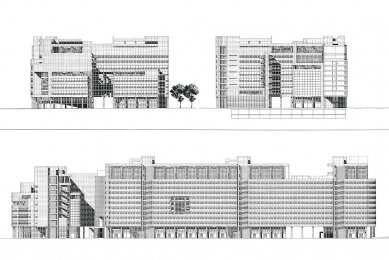 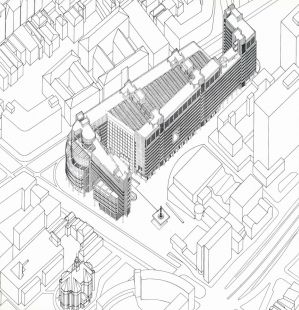 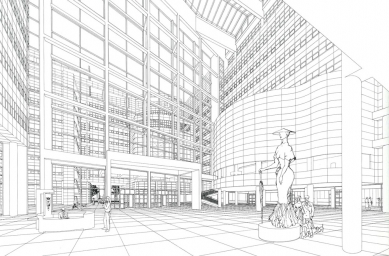