Extension of the Cluny Museum

It wasn't about integrating this magnificent historical site, but about an architectural digression born of a need for eclecticism, answering to the theories of a disenchanted reality.  In this strong historical context, the new reception is a ring on the finger that marks the rebirth of a museum, pursuing the idea of a Roman city slowly building on itself.
Located in the historical center of Paris, Cluny Museum is the museum of the Middle Ages and thermal baths, and gathers fragments of an history of Architecture that begins at the first century AD. The last piece added to the composition dates from the 21st century. The old entrance of the museum was inadequate to the intended restructuration of the museographic spaces and to properly welcome all kind of public. This new visitor centre therefore provides services and comfort naturally expected from such an important National Museum.
Gently approaching the imposing figure of the Roman baths, the new volume relies on historical compression. Acting as a catalyzer, it embraces the different space and time layers and generates a scenario that restores prevalence of the Museum on the street.  The aim of the project was to give the site an additional glow with the least impact on the existing structure.  Two volumes are joined, uneven, to define a contemporary image of the new building. Allowing the original volumes to be seen, the construction preserves the legibility and the succession of the old silhouettes.  A slight contraction of the south façade signals the new entrance of the museum. A footbridge leads to the Roman annex, and allows the contemplation of the remains.  The interior organization enhances the available heights by developing on three platforms. The museum is improving its reception facilities and managing its preservation role. The ribbon of the stairs surrounds the volume of the hall and offers a moving figure from the entrance.  Cluny Museum continues its long architectural history by filling in here and there its rare land availability that does not impact the archaeological heritage.
The structure relies on a few micropiles allowed by archaeology. It crosses the old masonry defining a protected area of 250m².  Pursuing an illusory timelessness in its complicity with the existing, the cladding is made of cast aluminium panels of uneven sizes and reliefs, contrasting with the stony masses of the remains. From the Boulevard Saint-Michel, the texture changes colour as the sun moves.  The façades are adorned with large areas of metal guipure, with a motif borrowed from carved stone lace, visible on the drum of the staircase of the chapel of the Gothic hotel. This pattern tattoos some panels and protects the openings by diffusing a filtered graphic light.  The weighting was imposed with an architecture of continuity that avoids, with the materiality of its envelope, any mimicry with its environment. The idea of reversibility is found in this cladding of cast iron plates with precise patterns, unique and random reliefs. On the facade, their assembly makes up a traditional constructive principle.  The ageing of the building is anticipated. The worn appearance enriches the story told by the past layers. The visitor center has never been new and will never be old. 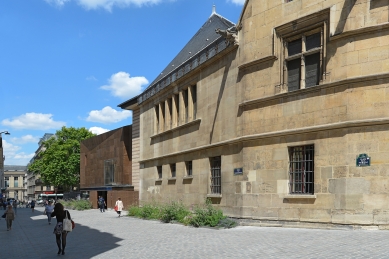 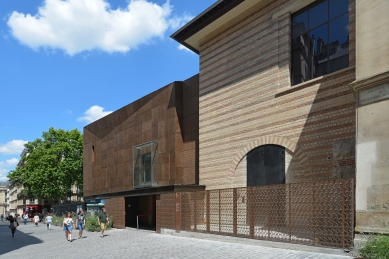 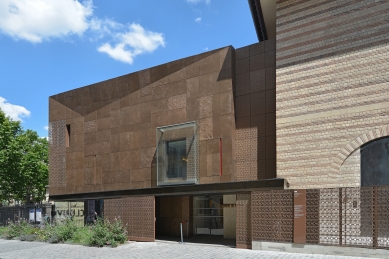 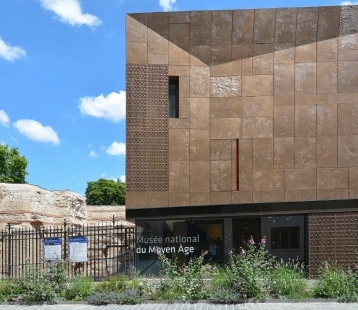 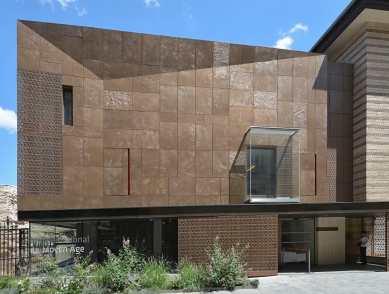 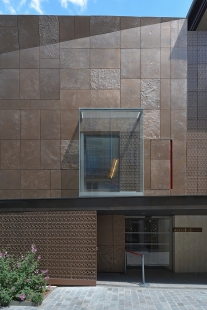 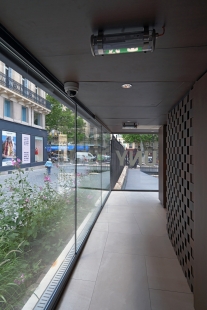 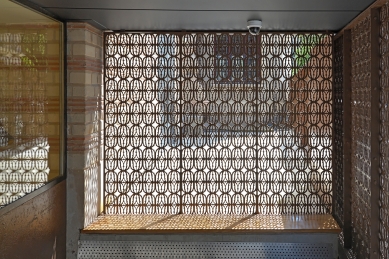 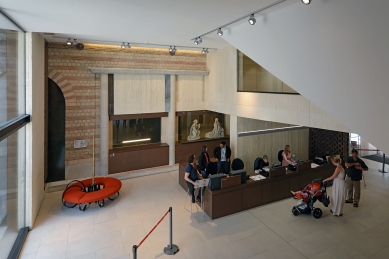