Development had already reached the area surrounding the Rüschwerke in Dornbirn, when operations were suspended at the heavy industry plant. Reducing the structure to essential building units and adapting it to a culturally used space housing the regional natural history museum Inatura lent the premises, encompassed by an urban park, an appealing and ambiguous aura. The interior design utilizes the large spaces, while being individually organized on multiple levels.
The architecture of early historical industrial buildings follows a rigid and at the same time well-proportioned and appealing classicist style. After removing all small extensions and alterations, which are typical for older factory buildings, together with the dimensions of the structure that reach far beyond standard size, this brings forth a timeless dignity on the green turf of the newly landscaped park, reminiscent of the dignity of some century old monasteries, despite their role as functional buildings. The parallel wings of the former turnery and assembly hall (for contemporary art activities) and the front wing of the former angular-shaped foundry flank a generously laid out courtyard that emulates the urbanist shape of a grand cour d honneur. However the castle metaphor is disrupted, for the entrée is not designed at the central axis but oriented toward the right side of the building (former turnery), where it is positioned at the centre. Thus, the courtyard in the style of a marching space is smoothed to a recreational space. The edifice partly features natural stone, partly grey plaster. The complex is complemented by a connecting structure adapted to happenings on the inside and three new smaller additions to the existing building. The first annex houses the projection room and connects the entrée and the angular structure on the upper level, breezily stilted on a concrete panel. Clad in pre-rusted steel plates it contrasts with the existing building, while bearing testimony to its former use. The building skin of the second annex at the front side of the building of the former turnery has been crafted from the same material. It features a biomass heating unit that supplies the museum building and surrounding municipal buildings with heat energy. The two other new building sections extend across the rear courtyard, which is flanked by the angular structure of the former foundry. This wing sports offices and exhibition spaces. A corridor links them loosely to the old sections of the hall. Their autonomy is emphasized by a glazed ground floor; the protruding upper level that is screened with textiles on all sides appears closed of, even though the interior space is transparent. The imprinted pattern - enlarged images of rusting high-grade steel - enters into a subtle dialogue and merges with the steel plates. Meanwhile the graveled courtyard has grown into lush pioneer vegetation.  Inside the turnery there is still the old riveted crane runway that has become a display object, commemorating historical steel construction craftsmanship and upgrading the space and the surrounding gallery. This profane basilica from the 19th century showcases a ticket counter designed by Hermann Kaufmann and Christian Lenz, a café and a museum shop inside a generous foyer. The gallery one floor above features special exhibitions, while the upper floors are reserved for a library and administrative offices. The round tour on the upper floor begins with a connecting passage at the projection room past the former furnaces, which have been preserved as memorials of industrial history. The two foundries positioned at an angle to each other were completely degutted and extended toward the ground floor. On and below platforms that freely float inside the space a wide array of topics are presented in an appealing manner with various objects in changing room configurations. The building skin retreats behind this optical density. The extensive round tour alters its course from the platforms to the ground floor to extend back via a staircase into the foyer, where the seats of the café tantalize. The urban park, divided into several spatial and thematic zones that frame the premises, provides a high level of recreation and draws a large crowd. 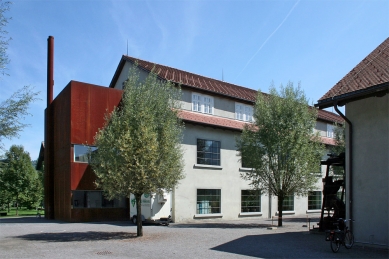 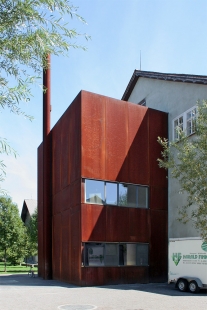 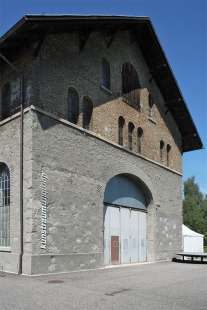 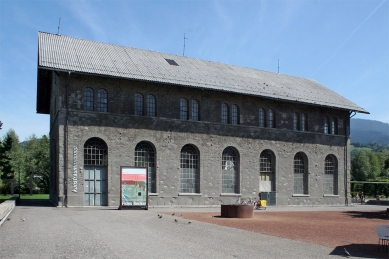 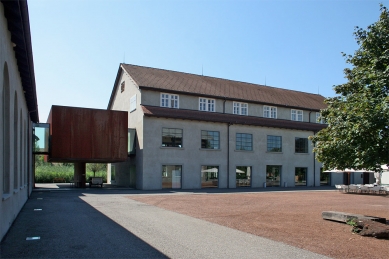 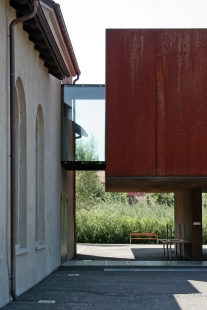 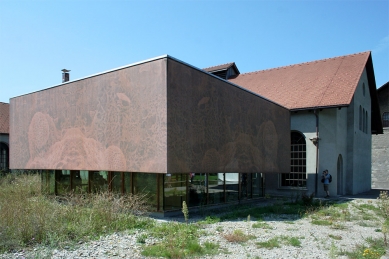 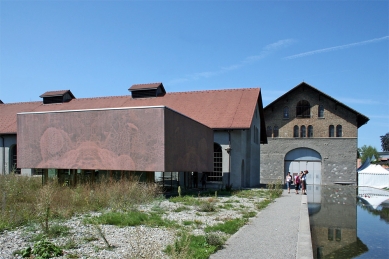 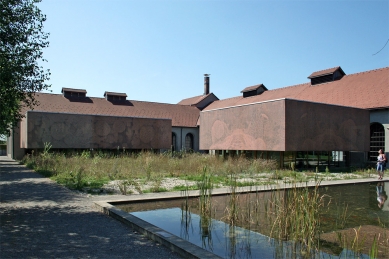 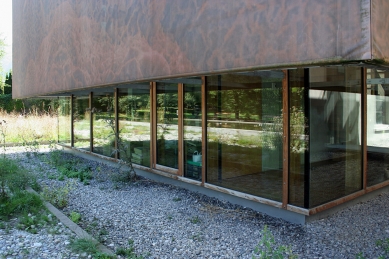 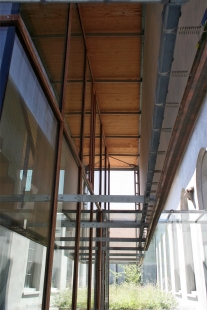 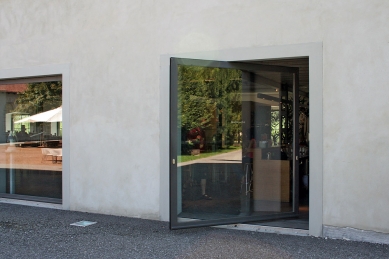 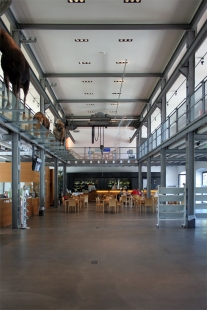 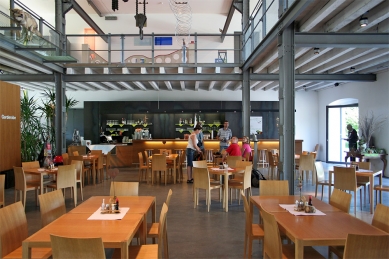 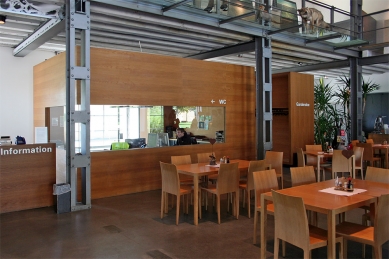 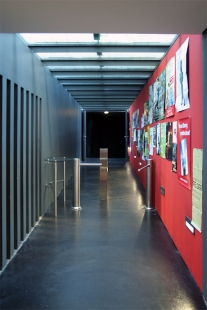 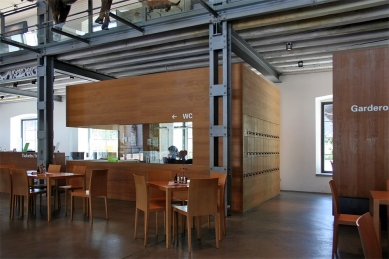 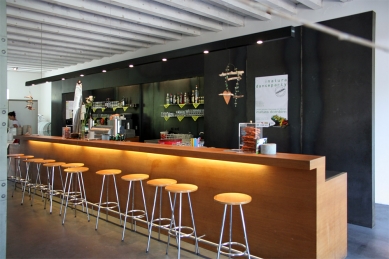 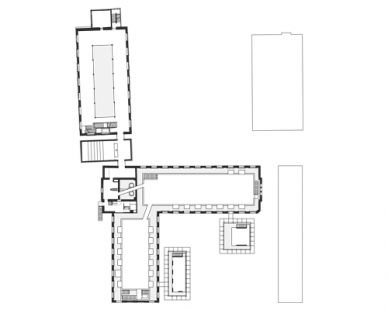