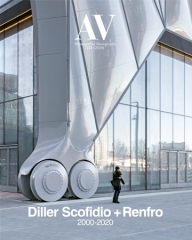 650 Kč
"The design of the ICA negotiates between two competing objectives: to perform as a dynamic civic building filled with public and social activities, and as a contemplative space providing individual visitors with intimate experiences with contemporary art.  The "public" building is built from the ground up; the "intimate" building, from the sky down."

The design for the new ICA waterfront museum will triple the ICA's current exhibition space and provide both a world class exhibition space and a vibrant center for public performances, educational activities and waterfront access.
The facade of the new ICA consists of identically sized vertical planks that alternate in composition between transparent glass, translucent glass and opaque metal. The system provides a taught seamless skin that blurs the distinction between walls, windows and doors while responding to the requirements of the interior program.
The 18,000 square feet of permanent and temporary galleries are located on the uppermost level, dramatically cantilevered over the city's public HarborWalk toward the water; providing a sheltered open space at ground level.
The 43 mile HarborWalk, to feature parks, boat ramps, café, and water transportation facilities at Fan Pier, is a primary architectural element and design inspiration that defines and animates the public spaces of the ICA.
The museum's flexible column-free galleries with glass planking feature moveable walls, 16-foot ceilings, an expansive adjustable skylight system allowing natural light to be filtered evenly throughout and polished concrete floors.
A lenticular glass wall facing the harbor is a special feature of the Long Gallery, which spans the entire width of the north end of the exhibition space and connects east and west galleries.  Composed of microscopic vertical lenses, the glass permits vision out when viewed from a perpendicular direction but blocks vision when viewed from an angle.
The cantilevered exhibition space is supported by four massive trusses, which are silhouetted behind the gallery's translucent exterior walls.
The floor and ceiling of the theater on the second and third floors is created through the extension of the wood HarborWalk material from the public grandstand into the interior of the building.
The remaining walls are glazed in clear glass allowing the harbor view to become the backdrop behind the 48 foot stage.
The glass walls can be controlled to meet performance needs, from full transparency, to filtered light and no view, to total blackout.  The 300-seat theater accommodates dance, drama, music, experimental media, film, video and lectures.
A vertically stepped-out space suspended from the underside of a cantilevered fourth floor serves as a digital media center.  Equipped with computer stations for accessing digital artworks, digital education and interpretative materials and the Internet, the space provides a stunning perspective of the water, framed as though through a viewfinder, with neither sky nor horizon in sight.  It will be illuminated by night to become a radiant, welcoming waterfront presence.
Two public entryways provide access to the museum through the first-floor lobby from the street and the HarborWalk, and the distinct tapering of the lobby directs visitors toward the information and ticketing counter, with the bookstore directly behind facing the water.  A 165-square-foot glass elevator with views of the water shuttles visitors from floor to floor.
A two-story education center, with windows facing both the street and the lobby, provide workshop and classroom space for the ICA's programs for adults, families, and teens.  It will include spaces for creating digital works of art as well as in traditional media.
The second and third floors also house a backstage area for dressing rooms, carpentry shops and wardrobe, as well as the museum's administrative offices.
An adjacent restaurant and cafŽ, facing the harbor side and Pier 4, features sliding glass doors that open to expand into exterior space for dining and performances.   The multipurpose lobby accommodates a variety of events, from openings to private parties, and performance pieces.
Groundbreaking for the new ICA is scheduled for late 2003 or early 2004.  Completion of the museum, which will be Diller + Scofidio's first major new building project in the United States, is projected for spring 2006.
Founded in 1936, the ICA is one of the oldest museums devoted exclusively to the presentation of contemporary art.  Through a comprehensive schedule of exhibitions of local, national and international significance and educational outreach, the museum provides the public access to contemporary art, artists and the creative process.

Project Background
The Chicago-based Pritzker family, sponsors of the prestigious Pritzker Architecture Prize and owners of the Fan Pier properties along the Boston Harbor, dedicated the .75-acre parcel on which the new ICA will be constructed for civic use.  The museum will be the cultural cornerstone of the 2.9 million square foot Fan Pier waterfront development - the largest private development project on the South Boston waterfront.  The development includes 675 residential units, a Grand Hyatt Hotel, 107,000 square feet of civic and cultural space, several acres of parks and open areas, an extension of the HarborWalk, a protected cove and a public marina providing numerous recreational activities.  Fan Pier is a collaborative effort between the Pritzker family's Hyatt Development Corporation, development manager Spaulding & Slye Colliers, master planner Ken Greenberg and master planning architect Childs Bertman Tseckares.

Project History
In 1999, the city of Boston selected the ICA as the recipient of a site on the waterfront for a new museum that would be the cultural cornerstone of the Fan Pier development. The ICA received the land based both on the critical need for more space to present increasingly popular programming and exhibitions and because of its potential to draw visitors to the waterfront year-round.
The opportunity enabled the ICA to envision a new home with expanded exhibition space, new programming and a permanent collection-all housed within a progressive architectural statement that mirrors the museum's foresight and risk-taking as a leading contemporary art venue.
In 2001, after a rigorous, year-long selection process, the ICA selected Diller Scofidio + Renfro as the architects of the new museum. Their passion and interdisciplinary practice incorporating architecture, performance, and media best reflected the mission of the ICA.
The design for the new ICA was unveiled in 2002 to great critical acclaim. It was included in NEXT: The Future of Architecture, at the 8th Annual International Architecture Exhibition at the Venice Biennale, and a retrospective of the architects' work at the Whitney Museum of American Art in 2003. In September of 2004, the ICA broke ground on Fan Pier for the first new art museum built in Boston in nearly one hundred years and the first building by Diller Scofidio + Renfro to be built in the United States. 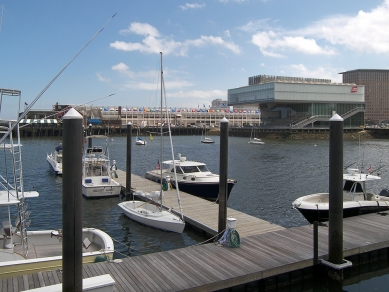 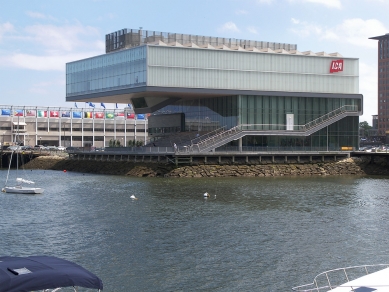 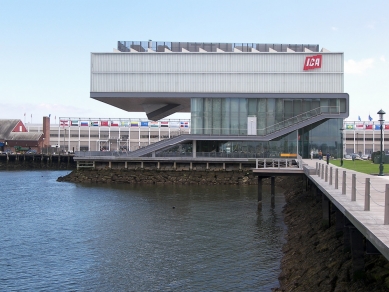 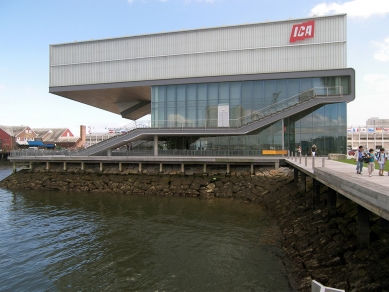 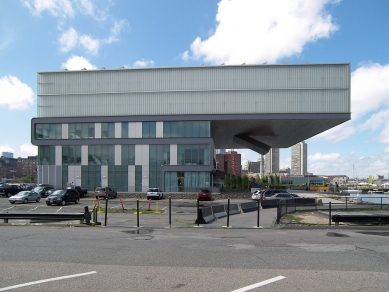 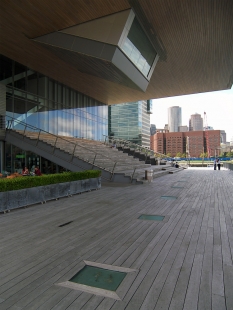 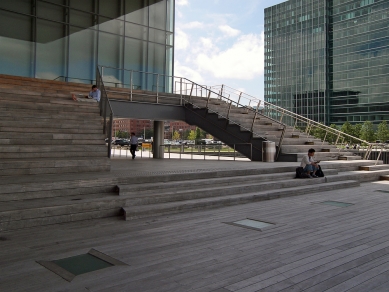 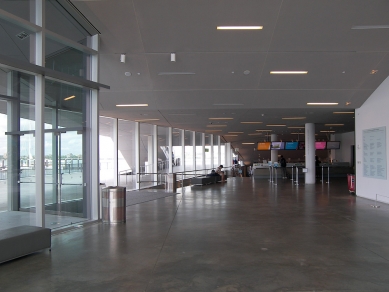 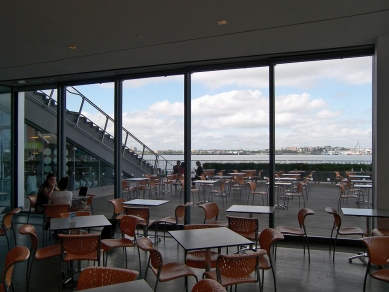 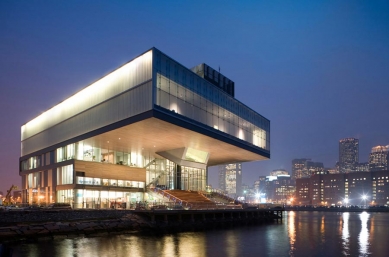 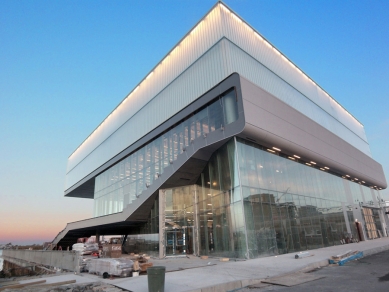 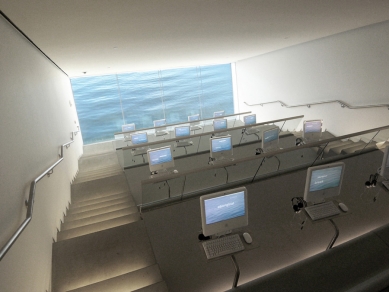 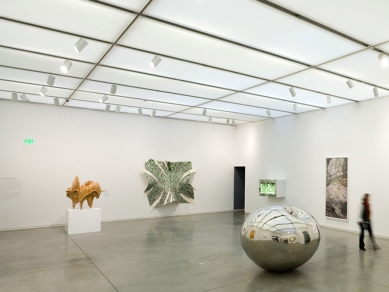 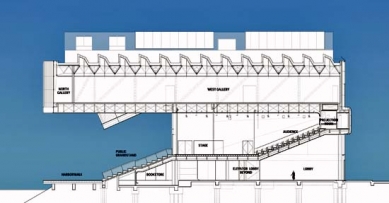