Warmia is an area with low building intensity. For this reason, it is sought for by private investors looking for secluded, wild places and who value closeness to nature. The house has been built in the vicinity of the lakes, drawing on the tradition of regional architecture, modern and discreetly blending in with the context of the place.
The solitary house blends in with the surroundings, lacking neighbouring buildings, away from roads. Harsh landscape prompted Przemek Olczyk, an architect and the author of the project, to use transparent and legible tectonics, thus embedding the building in the morphology of the plot.
The plot, of which the house takes only a small part, has a natural fold that was the starting point for the design of the building's body. A 90 cm reinforced concrete slab suspended above the falling terrain forms an extension of the upper elevation. It produces a distinctive yet lean line from which the building takes its name and character.
Reinforced concrete slab supported by the system of columns provides a clear zoning of the house; living area on the ground floor and the bedroom area on the upper floor. The horizontal layout of the building is made even more distinctive with a green roof line shifted relative to the ground floor. It gives the impression of a naturally created horizontal fracture, opening towards the lake.
Skilful adaptation of the architecture to the structure of the plot ensures that the scale of the 500 sqm house does not overwhelm it. Manifest external stairs, characteristic more of public buildings than single-family houses, provides an interesting architectural detail.
Due to the strong winds in this part of the Warmian Lake District, the design employs an atrial layout. The screen of glass walls of the building provides a transparent shield while maintaining important viewing axes for the users.
The internal atrium strengthens the sense of privacy. Depending on the needs, large curtains can be closed and opened, thus opening or closing the courtyard.
The glass-walled corner on the ground floor – with a free plan – overlooks the south-west and guarantees access of natural light to the most usable area for the inhabitants.
The key assumption of the project, and the tenet of the philosophy of shaping space at Mobius Architects studio is to enable reception of architecture from the inside. This is the main element of work on the project, which, as emphasized by architect Przemek Olczyk, allows the investors to both "have their cake and eat it".
True to the proverb, the architecture of the house remains visible to its users, while adding value to the surroundings.
The layout of the building in the form of the letter "L", in turn, reproduces the traditional organization of farm space in the Warmian-Masurian Voivodeship. The façades – mostly glass-walled – are supplemented with aluminium plates and ceramics. The whole is complemented by a wooden lamella detail in the gable walls, thus making a clear reference to the gables of the Warmian-Masurian cottages often decorated with boards arranged in various patterns. The simplified form of the roof with a 45 degree slope also refers to traditional rural buildings.
A detail of the roof part is a vertical skylight, which asymmetrically divides the slope by opening the interior of the private zone to the surroundings. The roof of the building is mostly covered with grass. Only from the side of open atrium concrete slabs were used. This is an aesthetic device designed to emphasize the modern nature of the building.
From a distance, however, masked by the green roof and an earth embankment the house blends in with the wild landscape of Warmia, providing intimate camouflage so desired by investors, and almost disappearing from view. Yet, there are spots where the architecture reveals itself by organizing the space according to the needs of its users. 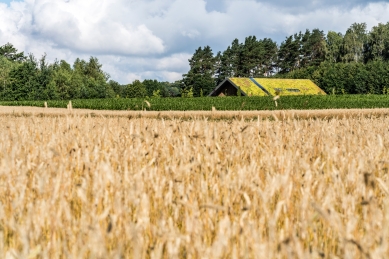 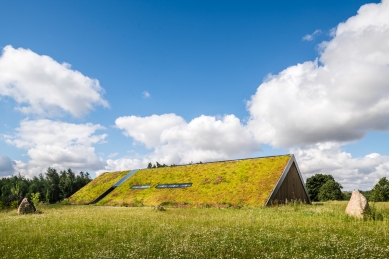 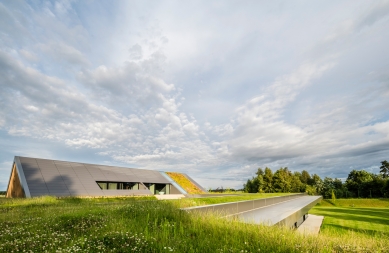 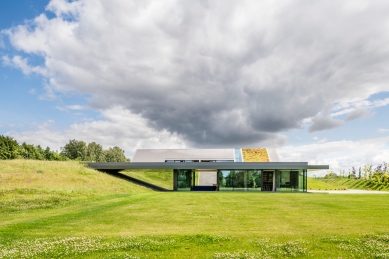 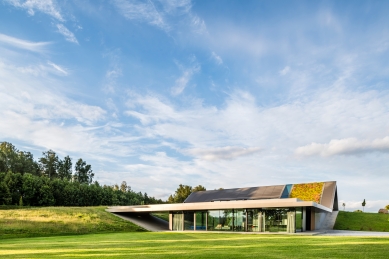 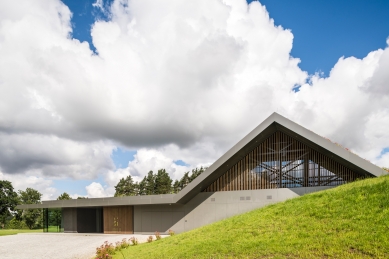 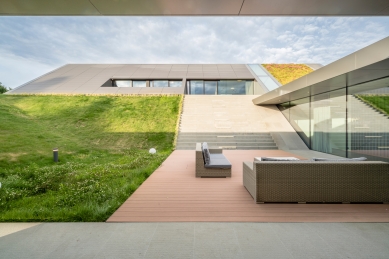 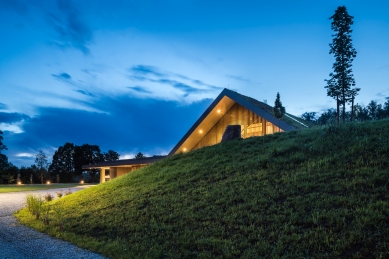 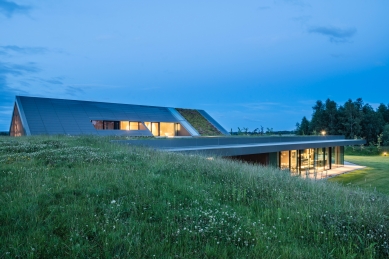 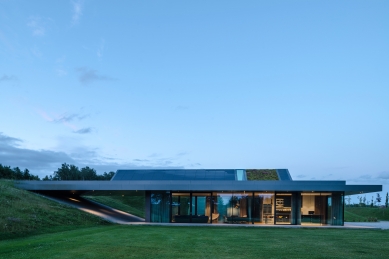 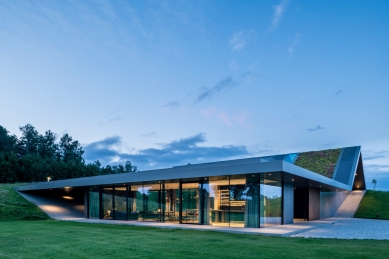 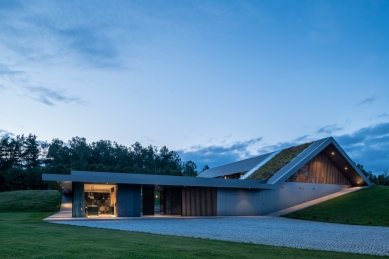 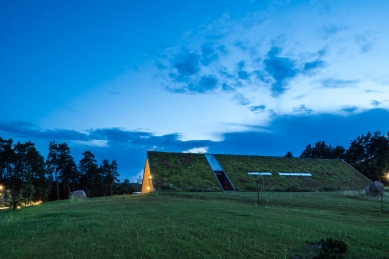 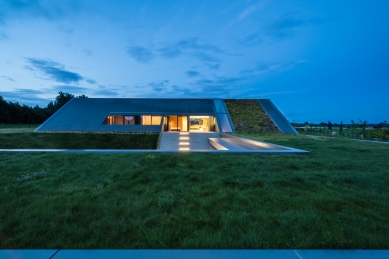 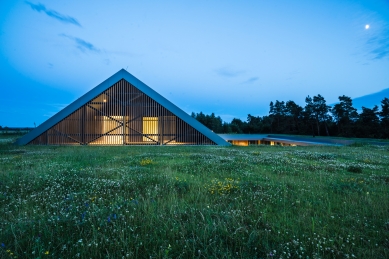 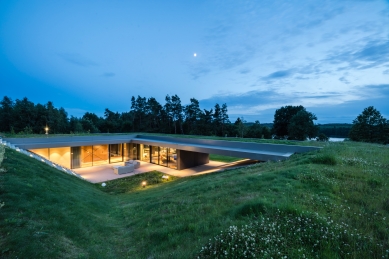 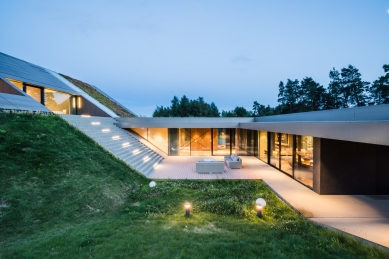 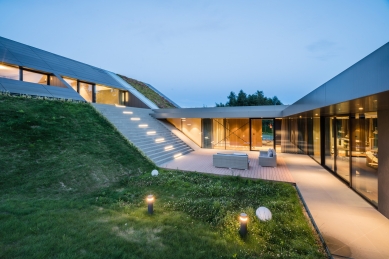 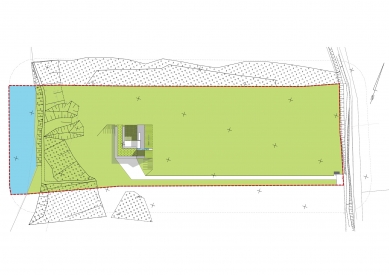 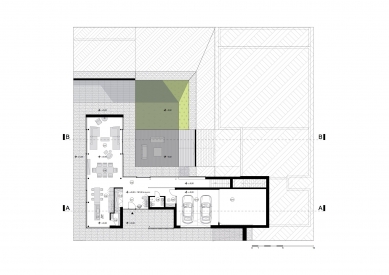 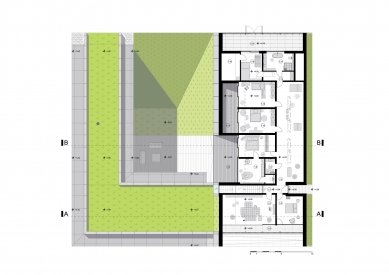 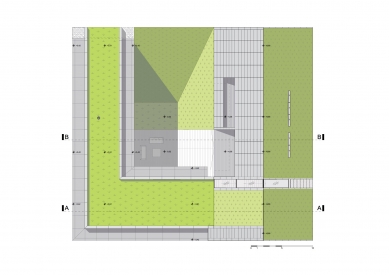 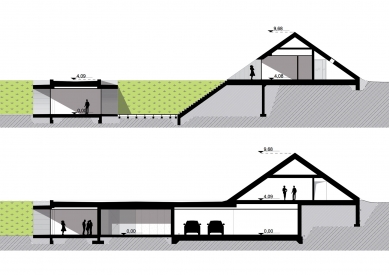 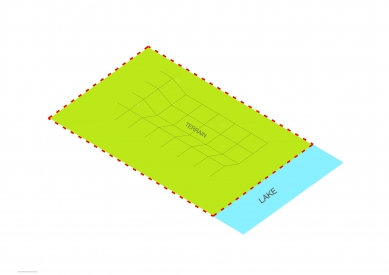 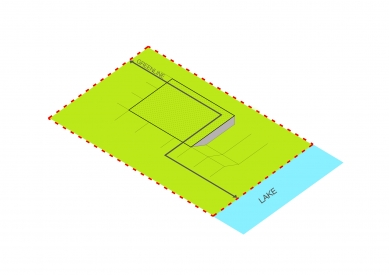 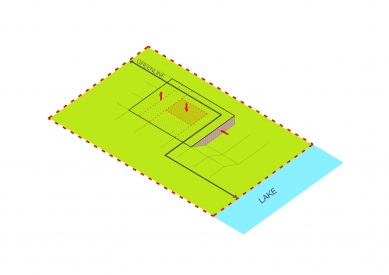 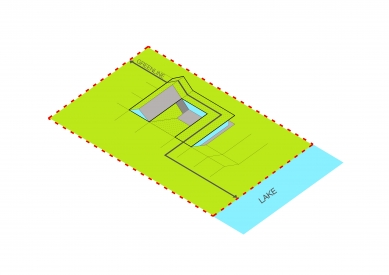 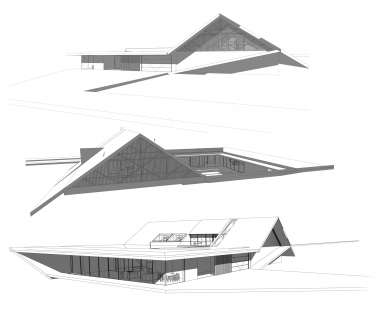 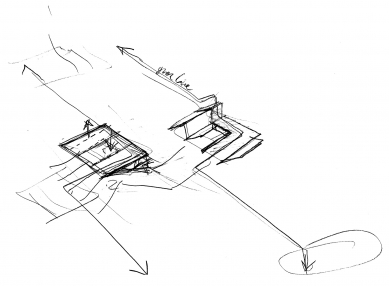