Respecting the existing library of Asplund as a major architectonic heritage the main part of the new library is located in distance. By defining a light screen the new library functions as a horizon / backdrop and tries at the same time to conciliate between the south-west corner of Odengatan with its taller buildings from the 1960s and the beautiful solitaire by Asplund. Among the two a low entrance building is establishing an inner connection between the old and the new library through the basement. Simultaneously it picks up the tectonic theme of a base with a roof terrace as Asplund´s library does and connects old and new also visually. The apparent grassland and trees on the roof continue discernable the green slope of the observatory hill and open up the gaze towards the ridge and its silhouette. The new main entrance with its slightly curved shape welcomes all visitors at Odengatan.

The library and the ridge
By cutting the new library into the ridge of the hill the intention is to clarify and extend the urban and topographical situation and to accent qualities of the ridge. This seems to be a contradiction yet as a result building and topography are not only joined to overlap each other but to become an interwoven entity. The circular intersection at top of the hill is arranged as a space between inside and outside. It plays a basic role not only by welcoming visitors of the library coming from the observatory and other educational establishments, as for example the Royal Institute of Technology, but also by allowing the park to flow through the two volumes continuously. Thus the historical use of Observatory Hill as a campus for various educational institutions will be traced symbolizing a district of knowledge and education in Stockholm.
According to the topography of the Stockholm Ridge, which is an important characteristic feature in the city landscape of Stockholm, an inner landscape of public and semi public space sequences is formed to create a new path down the hill. The different levels are thereby connected through stairs, hollows and three cores for circulation. Visual and physical relations from one floor to the other are defined by light circular “stair wells”, which guide the visitor through the entire library. Their glazed walls function at the same time occasionally as display cabinet or book shelf and invariably as a strong light source caused by their translucency. At the end of each path visitors are reaching information desks of the different departments. Down at the hill the bright entrance hall facing Odengatan with News -, Market - and Learning Zone is guiding the visitor either to the Asplund Library or to the inner enclosed garden, which leads the view back to the passed greenery of the ridge. The Entrance Hall itself is composed to correspond with the new social desires of a public library. It becomes an open place where children, adults and the elderly can approach a new interactive vitality within the city of Stockholm.

Colours / internal orientation
In principle the library is designed with white and light spaces to define a harmonic unity. According to that all furniture’s and other spatial investigations will be adjusted to keep the atmosphere calm and clear. However the orientation inside the library will be supported by a discreet colour-management, which is introduced at the map at the vestibule. One colour will be significant for one subject. For example at each department information desks and group rooms are enclosed by coloured glass panels. In addition the colors of sofas will function as visual signals.

Entrances
The new main entrance at Odengatan is easily accessible for disabled people from a drop off parking place within 10m. At Sveavägen an addi- tional entrance is defined in context with the entrance of the Swedish Institute of Children’s Books. A separate staff entrance with roofed bicycle parking is provided at Gyldengatan, which is also connected to the car parking below. Furthermore there are four more side entrances for the public library: at top of the observatory hill, at foot of the hill near the end of Gyldengatan, at the entrance hall towards the inner garden and one at the crossing point between the park of Sveavägen and the new library complex, which is leading through the café.

Logistics
The media flows from the old library through the basement above the metro tunnel underneath the entrance hall to the new library along the facade of Odengatan. The Media Management, Caretaker’s Office and the Sorting Machine is planned to be at level +1 and +2 of the new library, while the landing platform with the unloading area will be at level -1 through Odengaraget.

Indoor communication / accessibility
Because of the shifting circular space sequences a comprehensible longitudinal section could not be developed. Instead a diagram of the conceptual idea of the vertical connection is shown beside and in addition to that a series of cross sections, which define the position of voids, stairs and diagonal view connections throughout the building. The visitor will be lead naturally through the building from stair to stair, but for busy or disabled people three cores are provided to find a short cut way up to the top floors. In general all areas and floors - including the connection between Asplund Library and the New Entrance Zone - are easily approachable for disabled people. The only exception are some parts of the first Learning Zone at the terraced Entrance Hall. However the second and third Learning Zone at the first floor/Reading Hall and the gallery are fully accessible.

Imaginary Landscape
Our proposal interrelates zones rather than forming a strongly hierarchical circulation pattern. The multiplicity arising from the forms of these relationships between the main areas permits an immediate variety of access and movement within the different floor levels. The idea behind is to open up a flexible usage of each area and to form at the same time a strong identity within the space by the glazed round partitions and walls, which reflect a soft and tender light towards the study areas, carrels and shelves. The design tries to modify aspects of Asplunds architecture into a contemporary language such as his understanding of light, modesty and simplicity. Yet by choosing a completely different material - glazed volumes with prints
of white or translucent leave ornaments of delphinium - the poetic and monumental language of Asplund is transformed into a dissolving image of light. The chosen ornament which is based on the transformation of a photography by Karl Blossfeldt (Delphinium, larkspur - part of a leaf dried on a stem,1942) repeats the flow of circular movements, which is initial for the entire design concept of the project. The abstract alterations of a circle into fragmented surge like spaces allow to define floating space sequences with an interchange of enclosed and open areas and will be reflected by the semi-transparent ornament on the facade. Naturally the play with circular fragments tries to respond on the circular and semi-circular spaces of Asplund in a contemporary way and we believe that this flow and dissolution of space by concave and convex shapes replies to the needs and transformations of a coeval library today.

Outdoor Areas
The entrance building is enclosing an inner garden which is extending the natural park landscape down the hill. Its open meadow functions as a quiet place surrounded by light trees, granite rocks and plants like fern, woodruff, spring flowers and spread out fields of light blue delphinium in summer. Facing south it provides the possibility of reading outside. At cold seasons visitors are viewing from the surrounding spaces of the library like the News Zone and the intimate spaces of the Learning Zone or the Café towards the calm atmosphere of the natural environment. The inner garden is continued by the roof landscape of the entrance building, which is a public space providing a short cut between Sveavä- gen and Odengatan. The gentile moved topography of the roof is crossed by footpathes and overgrown with xerophytic plants and birches. Additionally there are enclosed patios – at the bazaar buildings of Asplund and at the top level of the new library with the management and staff section. The green patios illuminate not only the innermost areas with daylight but evoke a pleasant and released ambience. At the 6th floor the special collection of “The Source of Stockholm” is surrounding a circular shaped loggia, which allows to overview the city landscape while sitting outside in the sun.

Facade
The volume is wrapped in flat printed glass, creating a semi-transparent building. The ornament of delphinium as described before [see text “Imaginary Landscape”] functions as filter, while the graduation of the dot-matrix varies. Behind the glass are translucent, curved walls, bookshelves, stairs and opaque sunscreens made of fabric. These different components will achieve a differentiated and fluctuating appearance, even though the surfaces seem to be cohesive and quiet from distance. Opaque facade at the entrance building: Insulating glass panels with translucent capillary inlays. Capillary glasses distinguish themselves through excellent thermal insulation and light dispersion. The capillary tubules in their inside act as small air cushions and prevent convection of gases in the inter-pane cavity. The transparent opening at Odengatan serves as an open layer between inside and outside introducing a communicative relationship. Pedestrians can view inside the library while a big digital display at the right edge of the window announces the main activities of the library.

Long-term sustainibility
The Climate analysis for Stockholm points out, that Stockholm has limited solar gains, but a high natural cooling potential. Limited maximal temperatures and the east-west position of the new library limit the summer problem on solar shading. The psychometric chart shows that humidity is not a problem and that the main wind directions is frontal to the building West façade. Our approach for a low energy/high comfort library includes an optimized building envelop by reduced transmission losses through a triple glazed facade with internal shading, which optimizes the daylight supply by controlled solar gains. A basic displace- ment ventilation system for maximal ventilation efficiency will be provided through
- Ventilation system with sensible and latent heat recovery system
- Radiation based heating/cooling system by activated slabs or plaster
- Natural cooling through geothermal energy piles
- Geothermal heat pump system for heating
In addition daylight controlled artificial lighting, wind supported ventilation/earth ducts for preheating/precooling and a roof integrated photovoltaic system will support our aims to optimize the thermal and visual comfort for occupants. The minimized energy consumption for conditioning and the minimized electricity consumption for lighting, ventilation, appliances as well as the reuse of building structure will achieve an energy efficient design and will increase the degree of self-sufficiency.

Electricity and air supply
The space currently used to supply the metro with electricity (the transformer station), located at the south-west corner of the Asplund building, will be kept, while the upper section of the pressure equalisation shaft will be slightly sidewards repositioned so that it will be integrated in the new entrance building. The design of the shaft will become part of the public and accessable roof landscape. 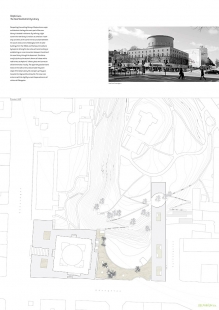 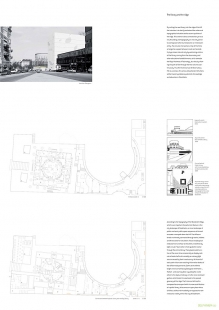 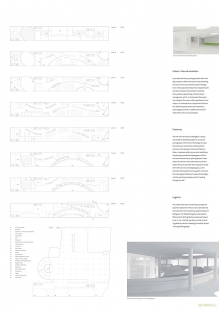 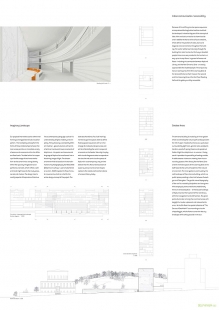 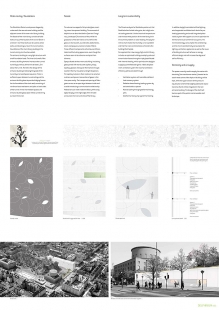 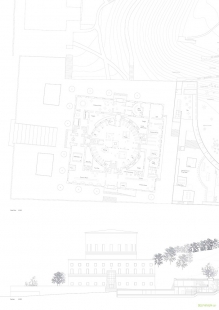 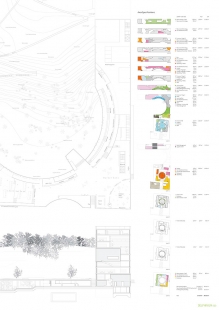 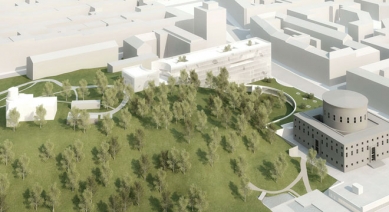 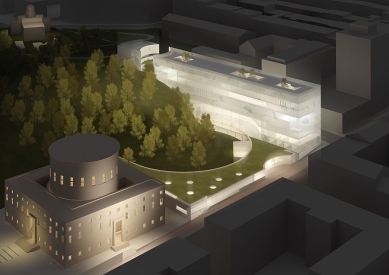 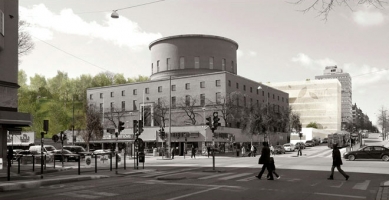 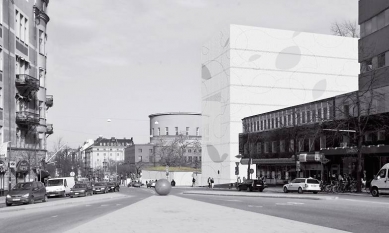 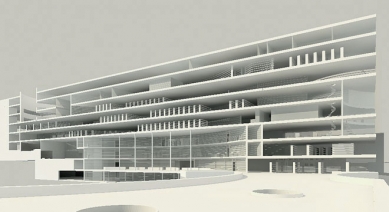 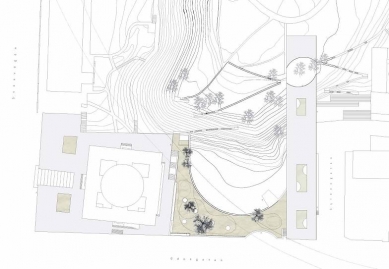 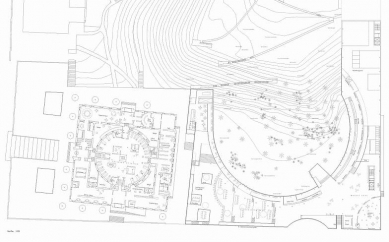 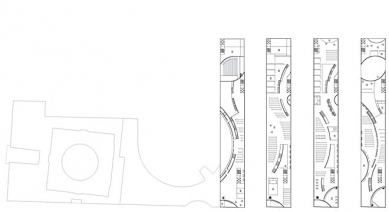