The facility is located in the central part of the site (25000m²) in one of the most famous wine regions of Slovakia – the Small Carpathian wine region, close to the capital Bratislava. Wine is made exclusively from own grape, raised in own vineyards.
Current year production is 600000 bottles, with a potential of increase up to 1.2 million bottles.
The goal was to include under one roof diverse functions – wine production, art, gastronomy, shop, hotel with wellness area and hunting room, offices, staff accommodation etc.
The main entrance is located from the state road between the towns of Modra and Dubová. The complex of the winery (5400m²) is designed as a compact unit and is sensitively composed into the site using its natural slope, giving a clear functional division of the architectural mass.
The winery part is an archaic concrete prism with a green wall which is also creating a visual barrier for the production part, eliminating the negative visual perception of the hall.
The manufacture and distribution as well as all the other relevant parts of the wine factory are in the northern part. Service court is in the western part, composed in the terrain cut.  The entire production area is mostly located below the surface, entirely covered by green roofs, which largely improves the energy balance.
At the entrance hall is the wine tasting in a comfortable environment with fireplace with visual contact with the tank hall, wine cellar, barrique cellar and wine archive. This space is also used for banquets, conferences etc.
From the entrance hall concrete stairs lead to the restaurant on the second floor with a large fireplace and visual contact with the kitchen, southerly and northerly views to the exterior and also with direct connection via the rear entrance to an outdoor terrace.
From the museum is a spectacular view to the exterior thru the glassed façade, bracket terrace over the water surface. The museum is focused on the art from the second half of the 20-th century.
The museum object is divided according to the architectural design for segments of different geometry of 18 m span and separate structure of reinforced wall of 30 cm thickness wedged into the foundation structures.
Long glassed corridor for visitors from the entrance hall allows watching the production as well as a sight into the barrique cellar.  At the end of this communication is the owners own VIP atrium, office, tasting salon, archives and own facilities.
Management of production and the administration is located in the second storey of the production hall with an exit to the economic court. Daylight distribution into the production hall is secured through monolithic skylights on the green roof faced to the north, by which direct sunlight is prevented.
Accommodation for the manager is designed as an energy house with green roof, with only one glass facade to the southwest. It is sunk into the terrain creating its own patio and by this is separated from the public part of the area.
The production building is two-storey and part single-storey. The modular system is 6x7.5 m, at the barrique cellar 3x12 m. The supporting system consists of 30cm thick prefabricated monolithic interior peripheral walls.
Apartments and the house of the employees are located in a single-storey building with a green roof. 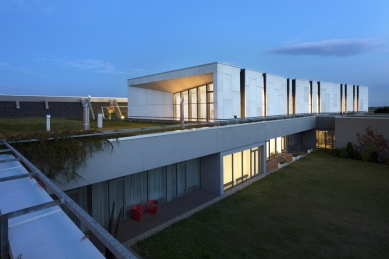 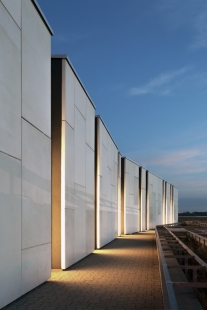 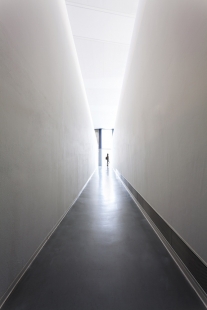 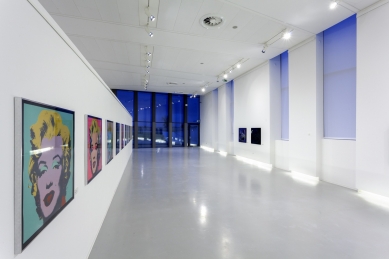 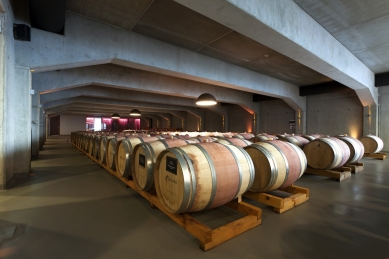 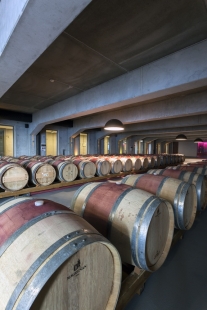 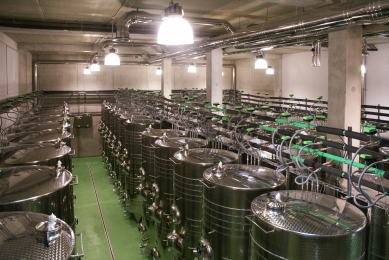 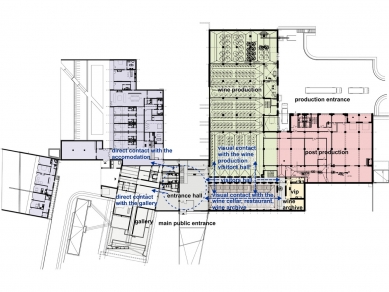