The unusual ground plan of the new pharmacy of the Cantonal Hospital Basel is determined by the heterogeneous environment. Town houses and apartment buildings from the 19th and 20th century, medieval parcels, yards, front and back facades, large nad small volumes surround the property and form its borders. Herzog & de Meuron make this variety an experience. Towards the front they close the street space and react to the different yard situations inside the block. The border distances to the houses, some of them listed as historic monuments, result in a large backyard that provides the hospital pharmacy with enough air. Basement floors from the sixties stipulate a static grid of four by six meters and determine the positions of the elevators and stairs as well as the delivery yard. Whereas early designs still planned for large, closed-in volumes whose massiveness is not perceivable, the realized project draws the image of a hammer with a small, trapezoid block towards the street, a thin bottleneck and an adjoining, almost square large volume. Paradoxically, it is surrounded entirely by a glass shell consisting of panels with a filigree grid that reflects the surroundings in a lively movement.
Bottlegreen glass was chosen as the facade material imprinted with dots. In its color it reminds one of old pharmacy glasses as wel as the poison of the medication and the plants from which remedies are partially still produced today. The reference to nature is directly formulated with a strip of artificial and natural ivy that, on the front facade, replaces the glass layer as an individual facade material with its own density, spatiality, consistency and light qualities. In the central inner courtyard above the first floor, a water basin with lentils forms a natural fifth surface that embraces the empty space together with the four glass walls and offers it to the blue sky above. The green here becomes the interface between natural plants and the glass made of quartz sand.
The glass looks functional like a pair of sunglasses that, aside from its elegance and hardness, also provides the facade with textile quality. Herzog & de Meuron seek this quality increasingly, from the project for cultural center Blois (No. 75) to the awning of the Kramlich House in Napa Valley/California or the idea of a textile facade for the Prada center in Tokyo. It is enhanced by the moiré created by the interaction of the glass panels and the perforated metal behind them; with every shift of position, it slightly sets the facade into motion, like light fabric in a summer breeze. The care with which Herzog & de Meuron profile this individual transparent interim space is demonstrated, for example, in the fact that on one hand it receives a considerable depth, and on the other hand that the metal sheets and glass panels are either perforated or imprinted, i.e., connected through complementary procedures – or that the window reveals are glazes and the heaters inside are covered with the perforated metal from the outside. The facade is designed as a specific space in which solidification and dissolution of the building unnoticeably merge – and not only where the sunlight seems to break away its glazed edges.
This glass shell that once looks scaly like the armor of an archaic lizard, one has the cool elegance of a contemporary modular system, also points to the primary idea of the design. The hospital pharmacy is a container, as are pharmaceutical glasses, and an organism that (similar to the Elsässertor building, No. 65) grows from within through cell division until it meets the outer borders that determine its form. The glass shell holds this form together. Windows look like incisions into the organic volume, the central inner light yard like a hole in the naturally grown glazed rock over whose walls, similar to the primary design for Kunstkiste-Museum in Bonn (No. 145), the architects wanted to have rainwater flow from the roof and collect in the water basin. The outer appearance becomes the interface between the inner dynamics and the various given limitations of the site and the building regulations. 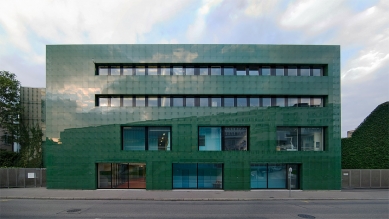 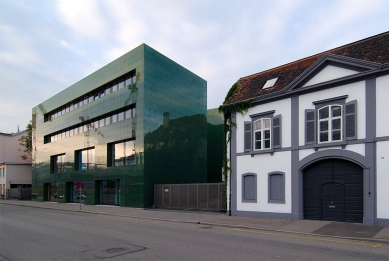 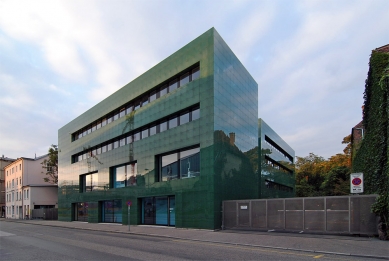 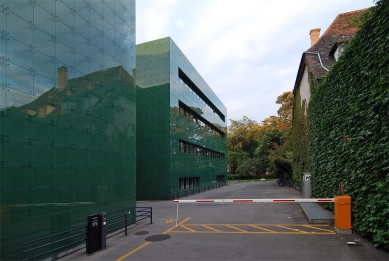 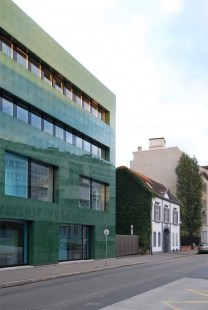 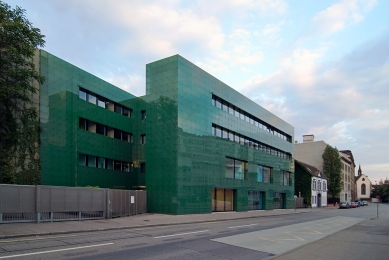 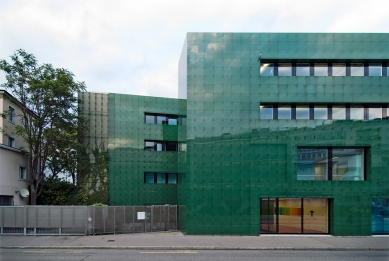 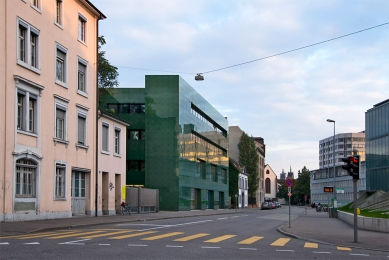 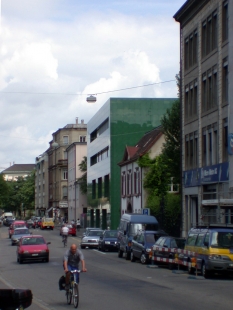 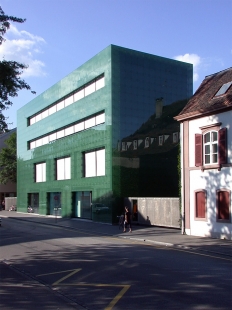 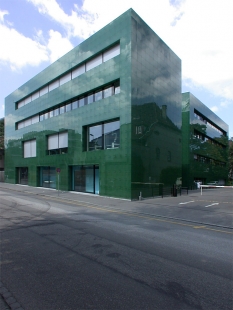 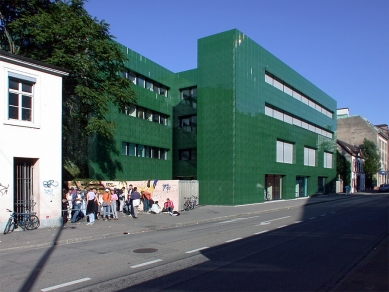 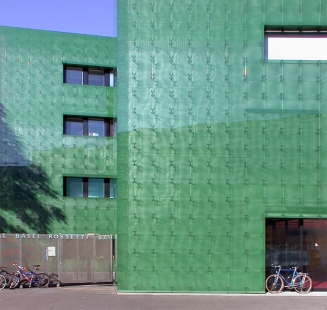 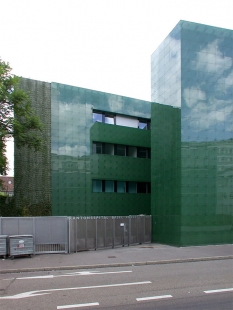 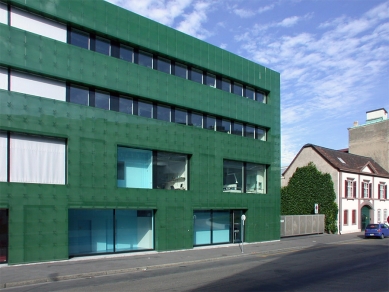 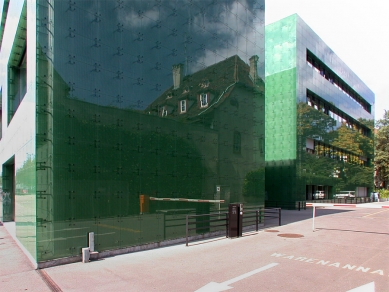 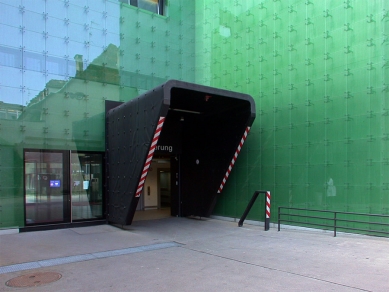 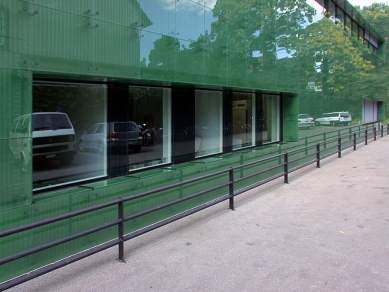 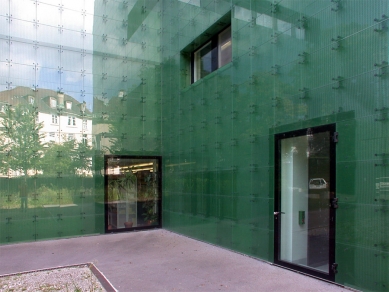 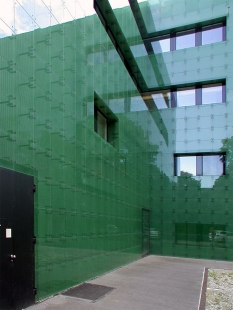 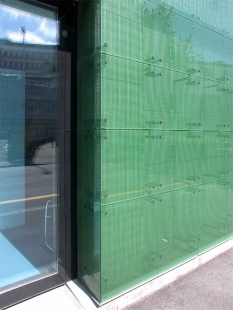 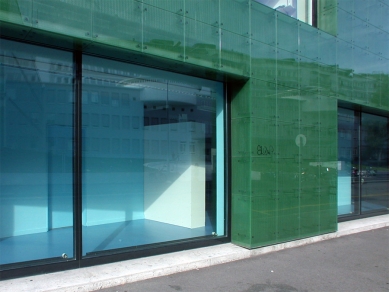 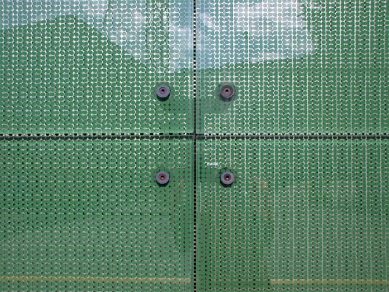 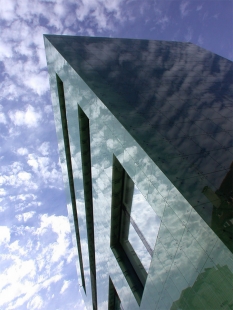 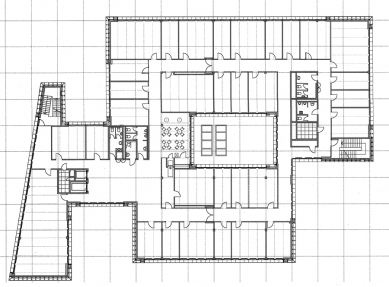