The conversion of the large former Toni milk processing building into a location for education, culture and housing creates a link between two very topical developments. On the one hand it establishes a new focus of educational facilities within the landscape of third level education institutions in Switzerland, which has been massively remodelled over the last few years.
On the other hand for some time now the outlying area of Zurich’s District 5 has been undergoing an urban planning process that is transforming it from a monofunctional industrial zone into a mixed function urban district and is changing and shaping the character of the entire city.
The aim of the commissioned study was to formulate a concept for a building that is almost the size of an entire urban block. The question was how to achieve a productive coexistence of different functions in the interior and to provide a positive impetus for the adjoining urban areas. We therefore started from the assumption that this task is not, primarily, an architectural one but rather an urban planning and program-related question.
Our design suggested dealing with the size of the project by means of a kind of internal urbanism. The existing system of ramps was reinterpreted as a vertical boulevard and became the building’s main circulation system. As a counterpart to this we placed a large entrance hall, conceived as a public space, at the intersection of the high-rise and the lower parts of the building.
An internal spatial figure is created that is connected by a series of halls, squares, voids and cascading staircases. It helps establish identity and places the many different functions like the buildings in a city, functioning as a kind of spatial catalyst that makes internal exchange possible. At the same time, through its variety of functions, the building emanates outwards and becomes the central public place in the new urban district. Through the generously dimensioned roof garden a piece of outdoor space is restored to the district and the campus.
In addition to the urban planning challenges, many different questions were also posed at an architectural level: for instance how to deal in design terms with the extremely divergent scales and with the large number of very specific functions, or what overall atmospheric mood is most appropriate for such an extremely dense complex. In this regard the existing industrial building offered productive resistance and served us as a constant sparring partner.
Its performative and spatial qualities live on, either directly or indirectly, in the new building, starting with the sculptural form of the building with its wavy expanded metal façade – an interpretation of the original trapezoid profile metal sheeting – to the concrete plinth that develops the topography of the former delivery infrastructure and to the formative horizontal, vertical and diagonal spatial sequences within the building.
The industrial character of the interior with the exposed service runs is derived from the visual imagery of the old milk processing plant. The raw, immediate materiality of the spaces in the interior is not a self-serving aesthetic exercise but creates an open framework for the activities of the students and lecturers. The building on the Toni Site is intended to be approachable; the kind of building that can deal pragmatically with the constant pressure for change that a lively university campus exerts on its spaces. Here appropriation, change and exchange are expressly desired.
To create diversity and variety the architecture works with various degrees of refinement at different places: generally raw, here and there more refined, sometimes over-defined, mostly under-defined. A wide range of extremely different spaces is created, extending from functional public halls and circulation spaces to intimate rehearsal cabinets, from the multi-functional workshop to the highly specialized sound studio: the building as city, the city as building. 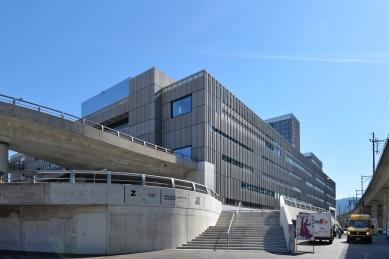 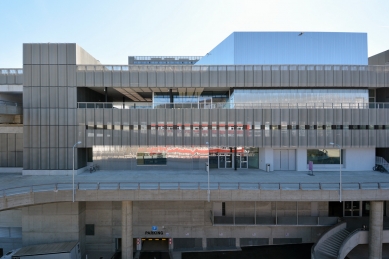 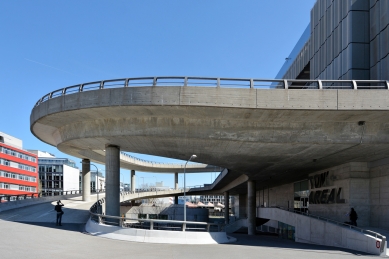 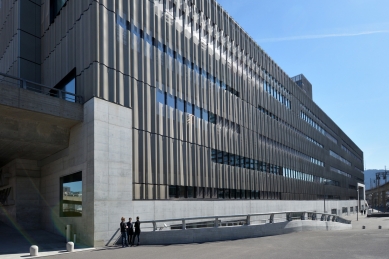 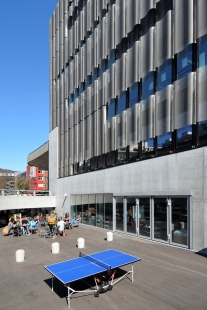 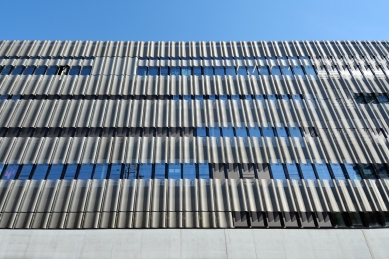 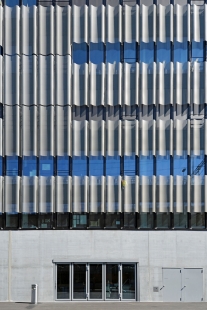 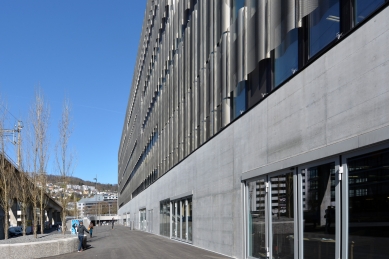 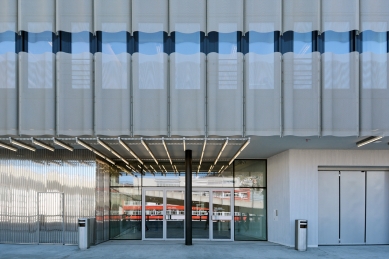 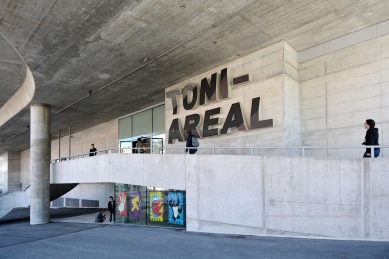 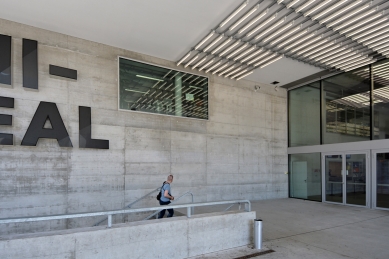 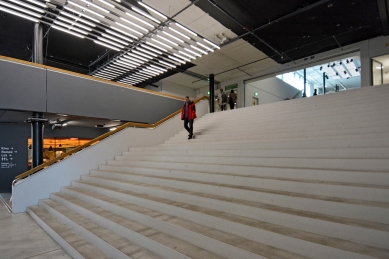 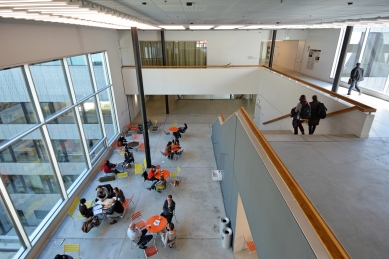 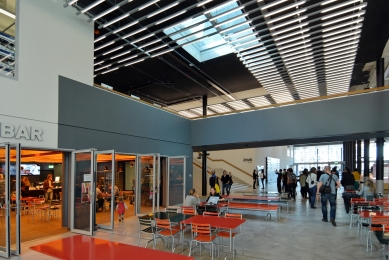 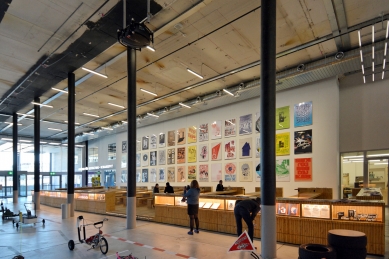 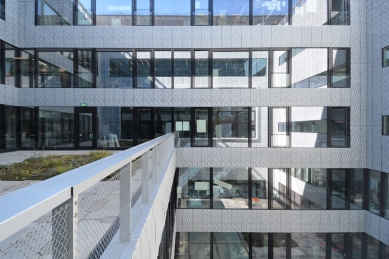 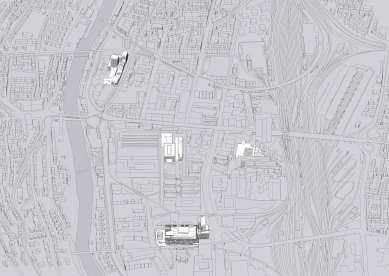 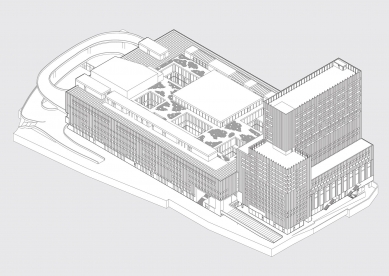 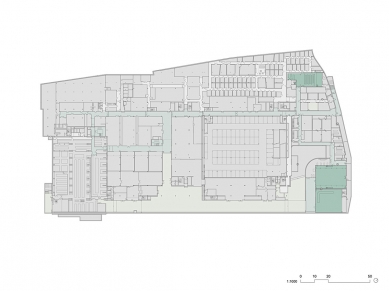 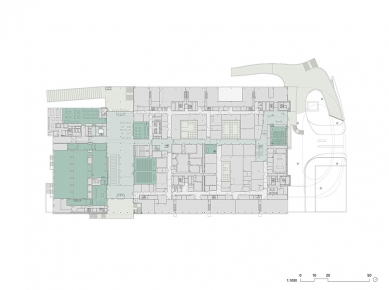 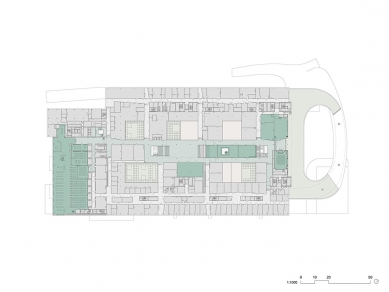 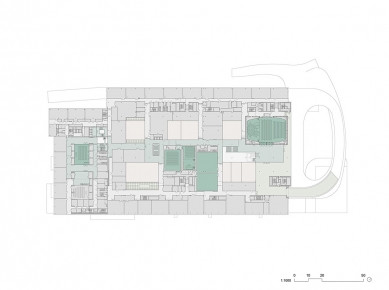 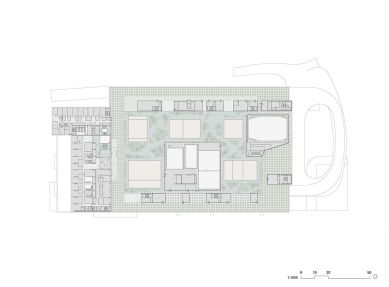 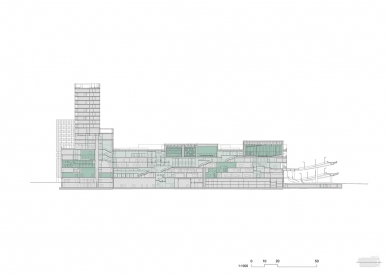 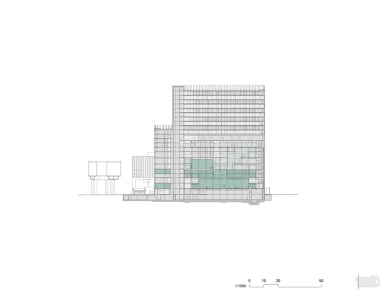 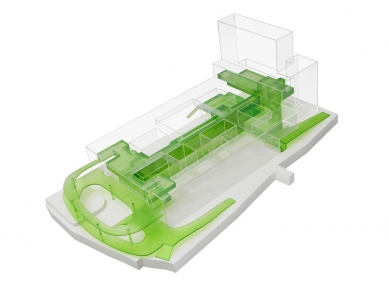