The 120-hectare expanse of Kew's Royal Botanic Gardens lies southwest of London. Set in a curve of the River Thames, its tranquillity untouched by the incongruous proximity of planes making their final descent into Heathrow, this is a rich palimpsest of landscape and iconic structures, shaped by the work of the leading designers of their day, including Capability Brown and Decimus Burton. In 2003 UNESCO listed the Royal Botanic Gardens, Kew as a World Heritage Site, in recognition not only of the importance of its historic landscapes, but for the significance of its work in the fields of botanical and environmental sciences conducted without interruption since 1759.

In 2004 the decision was taken to commission what is the latest in a series of architectural interventions at Kew, a bridge across the lake. The commission echoes the precedent established by William Kent, one of Kew's earliest visionaries, for objects placed within the landscape to be stumbled upon as though by accident. The aim is to create both an independent contemporary landmark and an integral component of a larger vision for Kew, embodied in a comprehensive master plan developed by Wilkinson Eyre. Taking Burton's Palm House, completed in 1848, as the central point of a notional circle, this master plan draws a sweeping arc bounded at either extremity by important through-views and bisected by William Nesfield's great Syon Vista. This grand curve establishes a new primary circulation axis which will allow visitors to traverse the breadth of the landscape, whilst maintaining the tranquillity and existing structural integrity of the gardens. The Sackler Crossing spans a section of the Arc's route which lies across water.

Reduced to its essence a bridge is a structure affording passage between two points at a height above the ground. The challenge of bridge design is to unite the perfect expression of this essence with architecture which makes possible not only a new journey, but new perspectives, new experiences and a new contextual composition. Following Capability Brown's preference for the 'sinuous Line of Grace', the walkway plots a serpentine path across the water, the constantly curving route yielding its secrets only gradually. The deck is set the minimum possible distance from the lake's surface, allowing those crossing to feel that they are literally taking a walk across the water. This sense of proximity is enhanced by glimpsed views of the lake between the deck treads and by the near invisibility of the supporting structures which lends the bridge a quality of sculptural abstraction. Clear visual connections are established between the manmade landscape of the bridge and the repeating natural forms of its setting - the gently rounded contours of the land, the smooth expanse of water and the powerful verticals of the trees.

A spare but exemplary material palette of granite and bronze reinforces the elemental character of the design. Rhythmic bands of dark granite laid like railway sleepers form the deck, while cast bronze vertical cantilevers set flush between the granite treads act as simple balusters, the top of each slender upright smoothly contoured to fit comfortably in the hand. Viewed end on, the balusters read as a solid composition. From the side this solidity fragments, allowing views through and affording the structure a pleasing material ambiguity, with light used to preserve this transparency after nightfall. 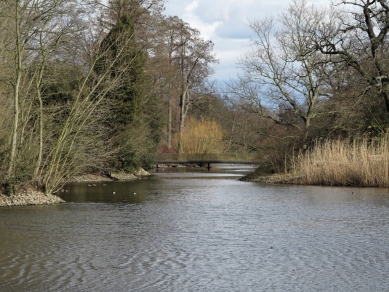 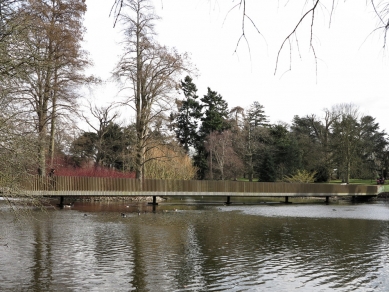 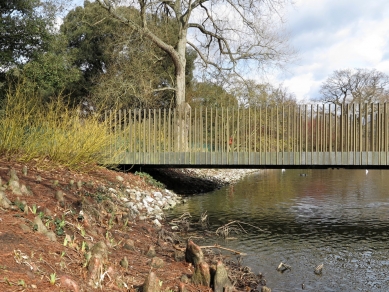 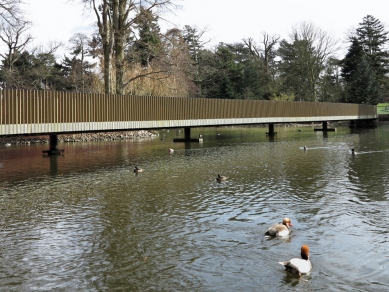 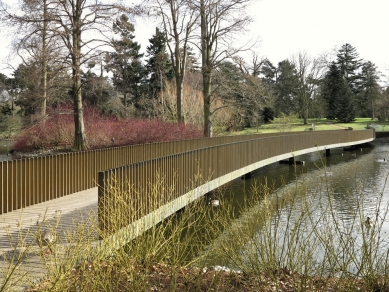 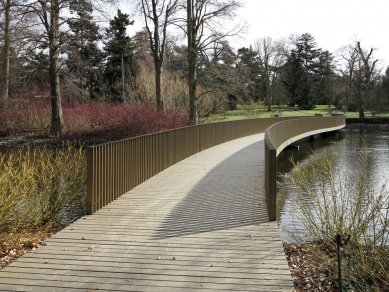 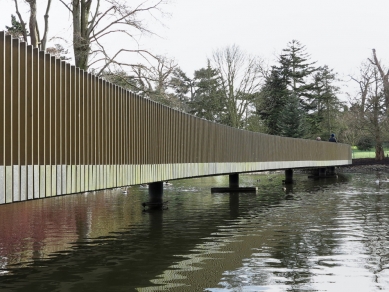 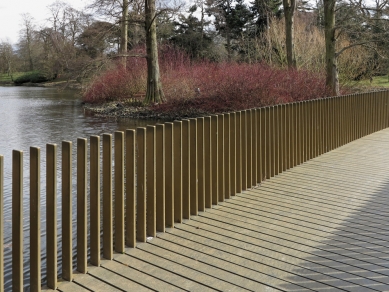 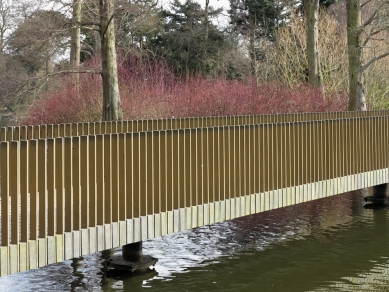 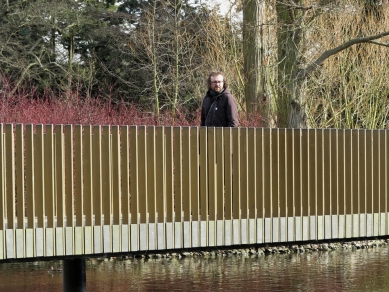 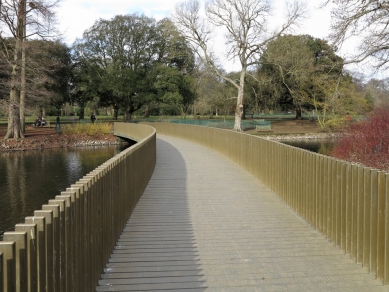 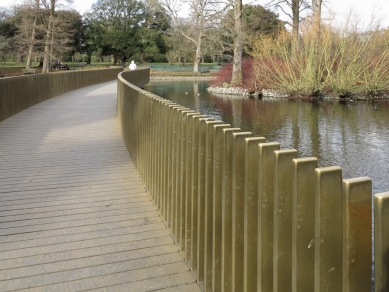 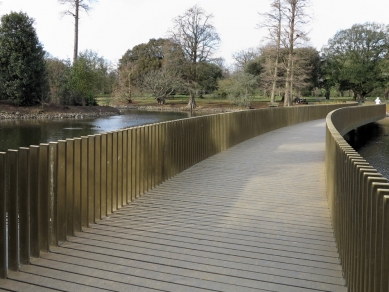 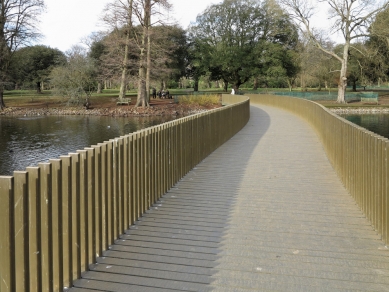 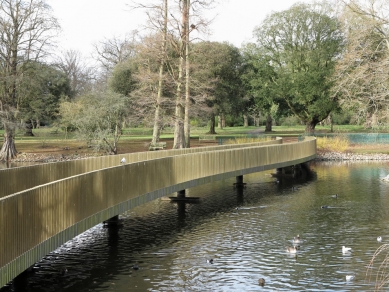 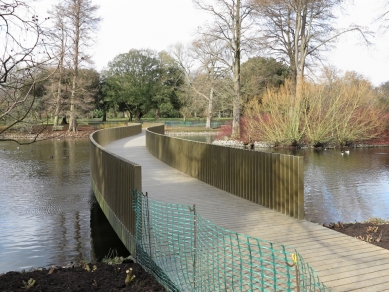 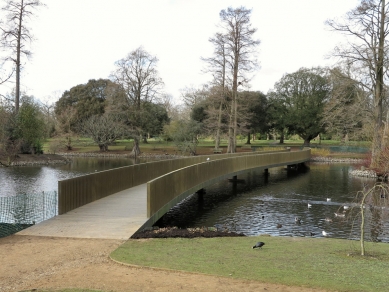 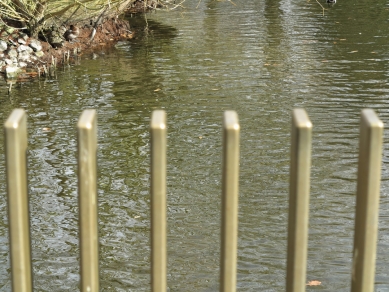 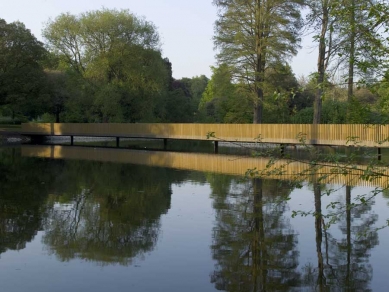 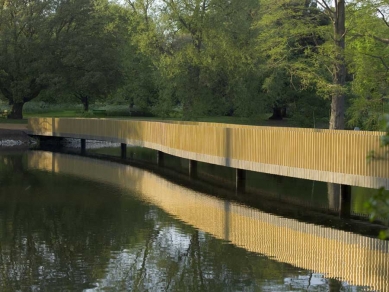 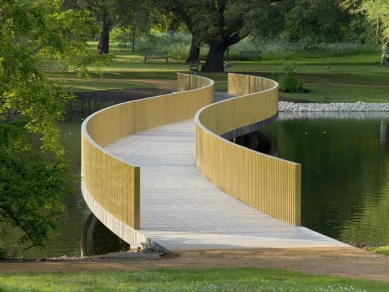 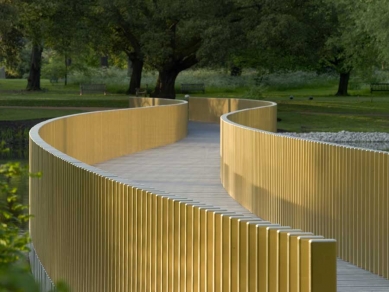 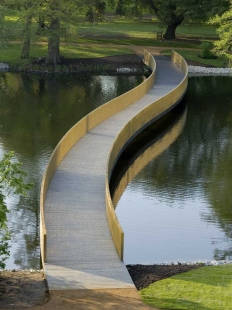 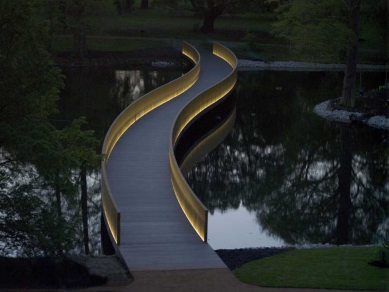 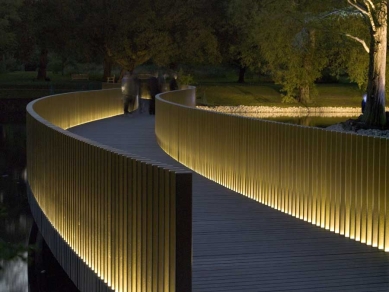 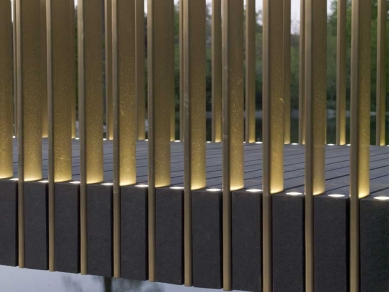