An architectonic punctuation at an exposed site of the city - a new and distinctive Entree to the city - a future oriented potential for development for the whole area.
Putting a company into the spotlight means transforming a philosophy into architecture. The 'black panther's does not only recount the story of the company but he emotionalises, he describes a vision and makes it physically and sculpturally ascertainable. Where Design and shape evolve, ideas emerge and become manifest in mass. Elegant and smooth, the 'black Panther's composes eagerness and speed to the urban architecture. His watchful eyes attend the street - movement and silhouette merge in the dance of the forces and the night.
The office-building MP09, named after the owner of the firm, Michael Pachleitner,also called Black Panther, was intended as a landmark to the city-entrance of Graz.
In 2006 the Pachleitner Group, which specialises in the design and marketing of spectacles and jewellery and Wegraz, (Graz-based company for urban renewal and refurbishment), set up competitions for an office and hotel building, as well as a headquarters building with a wing to be rented out, a flagship store and restaurant. Both projects established 2006 at a 2stepped competition among alltogether 9 offices decided unanimously by the jury.
During the competition phase the client offices photographs of airplanes, ships and cars that expressed the feeling he wanted the building to convey. We derived from them the guiding idea of a crouching black panther, poised ready to spring, which provided a metaphor that accurately describes both building parts and which committed them to a goal: to create an appearance that would be both powerful and elegant. The detail planning for the project, and the scheduled completion date was started immediately afterwards.
Construction of the 32-million euro project began in summer 2007, it was completed in May 2010: a free-standing building in a setting defined in very diverse ways by the UPC arena, ice sports stadium, Murpark, housing blocks and single-family houses. It is located directly on the Liebenau ring-road, which has a high volume of traffic and is a source of emissions, on an approximately triangular-shaped site that originally sloped to the southwest. The main part of this provocatively conspicuous office building contains the headquarters of a local company designing eyeglasses and jewelry and distributing them worldwide.
Its a hard shaped sculpture covered with a black glass facade erected over a concrete base develops from a compact tail to a more and more resolving head cantelevering towards the city. The different directions of the building structure are retrieved in the inside structure of the spaces. From almost every position there are vistas through the whole building to the outdoor spaces. A special quality of the building evolves out of the individually designed technical solutions concerning the facade, partition walls, doors, staircases and many other components. Accurate details and few colors in various surfaces and materials define the interior. Even the whole furniture was custom-made by the architects and is consequently congruent to the architecture.
The desired expression of concentrated tension and dynamism, amplified by long window strips, suits the company’s philosophy that enabled a small family business from the post-war years to develop into a company of global reach. 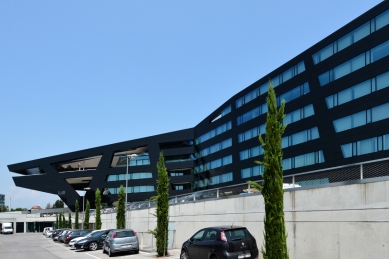 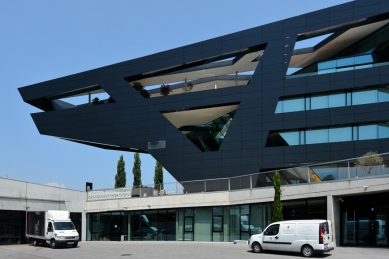 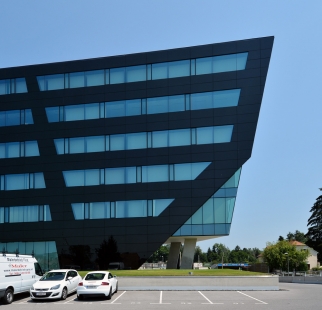 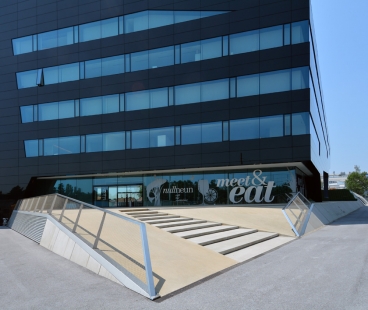 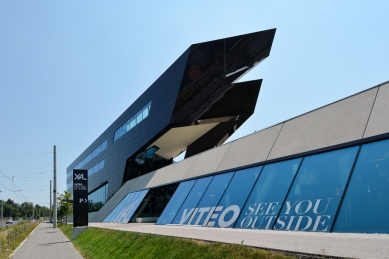 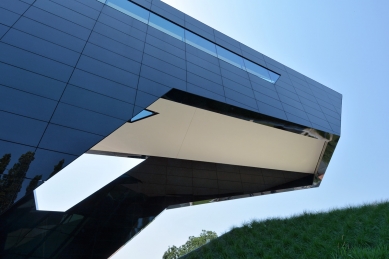 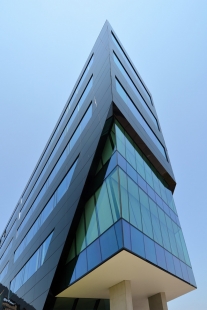 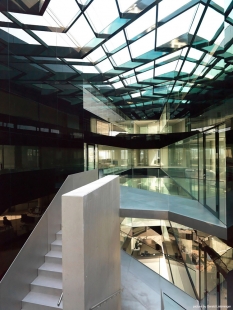 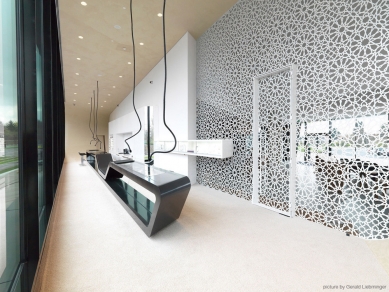