Jorn Utzon is noted for his design of housing reminiscent of traditional Danish farmouses with four sheltering sections set around a central courtyard. Utzon's own home in Ålborg had a nursery garden in front. The neighbors all had huts, sheds or some kind of shelters for a variety of activities - raising rabbits, boat-building, or simply storing items for family activities. When he created the Kingo Housing plan, Utzon also drew upon his studies of Eastern architecture. He noted that in China, farm houses were completely closed to the outside, but open to a central court. He also observed that in Turkey, a building regulation prohibited any building that would block the view of existing houses.
After designing a housing project which was not realized, Utzon approached the Mayor of Helsingor and proposed courtyard-style housing. Utzon was able to convince the Mayor that he could provide his housing plan for the same cost as the existing, poorly-done, housing developments.
The Mayor put a tract of nine acres of land with a pond and rolling hills at his disposal for Utzon's housing plan. Utzon commissioned a show house from a firm of builders. The house was a success and eventually 63 houses were built within cost restrictions set up by the government to keep the costs below a certain level for low income workers. The 63 houses were built in rows following the undulations of the site, providing a specific view for each house, as well as the best situation possible for sunlight and shelter from the wind.
Utzon likes to describe the arrangement of the houses as "like flowers on the branch of cherry tree, each turning toward the sun." The individual houses are L-shaped with a living room and study in one section, and the kitchen, bedroom and bathroom in the other. Walls of varying heights closed the remaining open sides of the L.

Commentary by the Pritzker Prize Committee 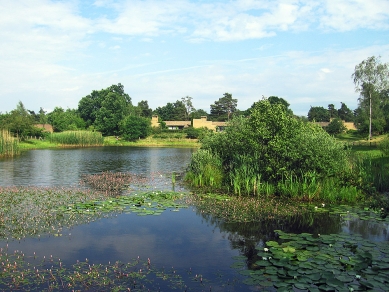 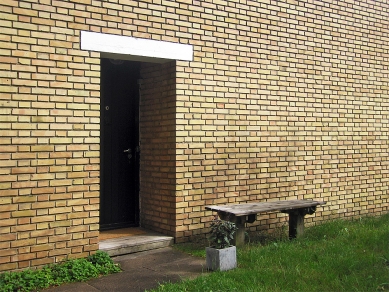 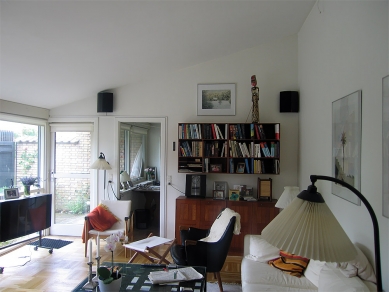