High-quality materials; timeless yet contemporary design; multiple functions on five storeys. This is the dynamic townhouse from Lengfeld Mikolajcak architects that has replaced a 1950s building at Maria Delago Square in Bolzano, South Tyrol (Italy).
Franz de Paula von Mayrl Foundation, a charitable organisation, owns many buildings in the centre of Bolzano. Among them is the historic and protected Palace Schrofenstein to the west of Maria Delago Square. The residence dates back to 1368 and is home to unique Gothic frescos uncovered during the renovation in 2006. From 1770, Palace Schrofenstein was used by Franz De Paula Foundation as a voluntary workhouse.
Adjacent to the Schrofenstein Residence, north of the Maria Delago square, was the two-storey building. Built in the 1950s, its hipped roof and dormer windows appeared incongruous amid the tall palaces that frame the square. The foundation has appointed Lengfeld Mikolajcak Architects – winners of a competition to secure the contract - to replace the 'ugly duckling' with a new building. In spite of competition guidelines (which stipulated only two storeys) the architects proposed matching the height of the new structure to those of surrounding roof eaves (five storeys). Both the authorities and the advisory committee agreed that this move will help to define the Maria Delango Square, which lies south of the plot. On the north-west side is a detached stairwell built in the 2000s; this was spared demolition and now provides access to the underground garage. The result is a simple but confident new building with an elegant bush-hammered facade that seamlessly merges with the historical and classical environment.
Even though the new building seems plain and simple on the outside, within is a multi-purpose, diverse structure. At ground level, the bush-hammered concrete facade opens toward the public space. Full-height glazing establishes an intense connection between the bar and the square. The bar itself features a local and traditional trachyte stone floor, while the counter and tables employ old wood with grey glazing. To the east, towards the Weggenstein Strasse, the ground floor connects to the public space via a shop. The north-west corner houses a small barbershop boasting 1950s flair.
The existing stairwell tower has also been given a contemporary, fresh look. The old fully-cladded tower now has ivy climbing around perforated metal. Other plants were carefully chosen to reflect the different seasons. The metal-clad tower combined with a beautiful concrete, yellow-tined finish strikes the perfect balance between contemporary and classical elements. Office space on the first floor offers generous 2.7 metre ceilings and flexible floor plans that can be divided into smaller units. On higher floors, the new building contains residential spaces.
Each housing unit enjoys a narrow but long balcony with views to either the west or south. Additionally, the 82 sq m corner apartment on the second floor has a spacious south-east loggia. On the fifth floor, the flat roof of the lower level becomes a spacious terrace. The roof features inclined surfaces which create a warm and comfortable living space. The windows have received special attention from the architects: they are composed of dark-stained larch frames in the same proportions as those of Palace Schrofenstein. The windows also reach down to the floor, which allows extra light into the interior. They are set 20 cm inside the exposed concrete facade and are equipped with beautiful trachyte sills that cantilever slightly beyond the building's margins. Smart and simple shutters - also made of dark-stained larch - are hidden inside the wall and can be easily moved by hand. Oak doors and floors complete the structure's exquisite appearance. 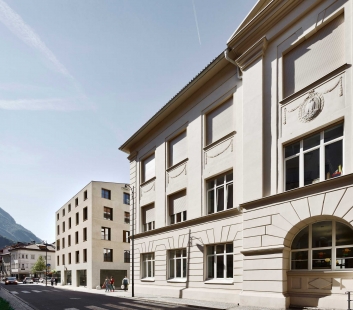 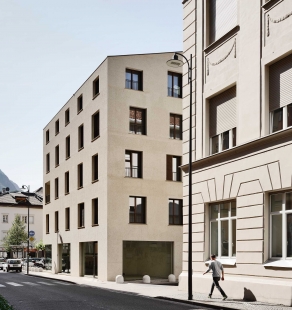 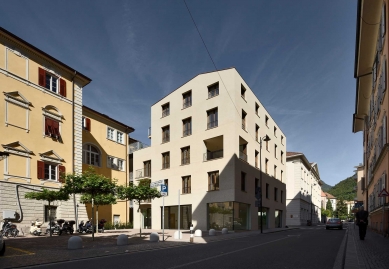 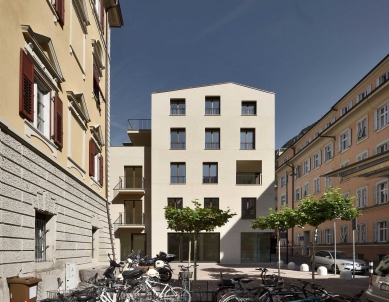 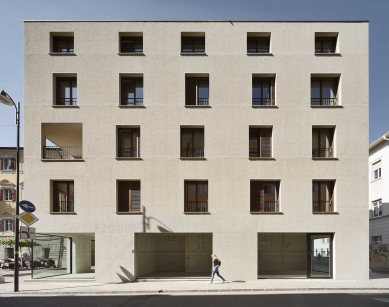 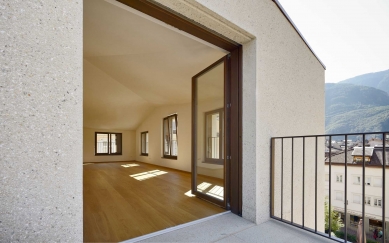 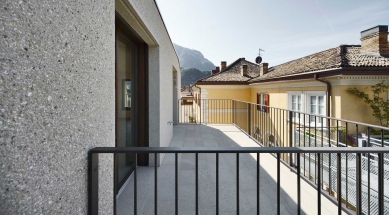 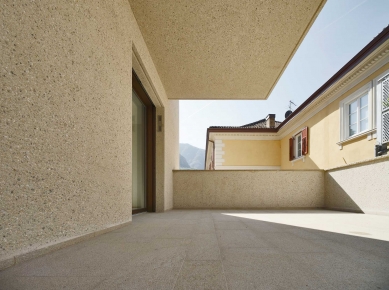 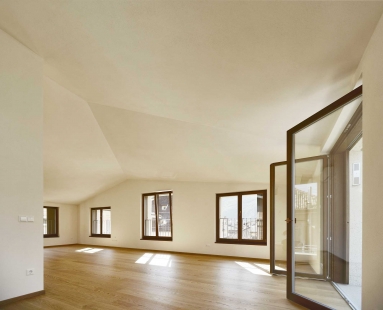 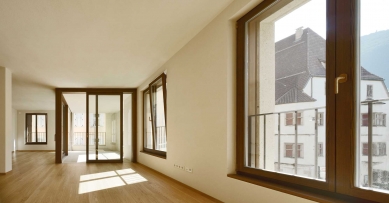 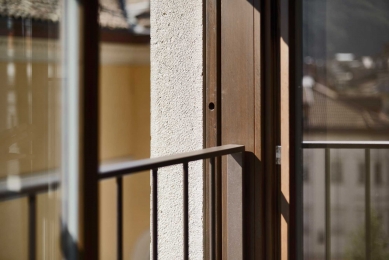 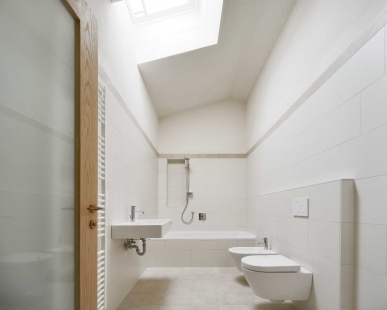 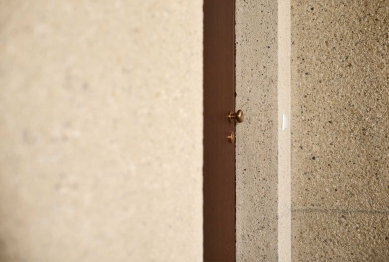 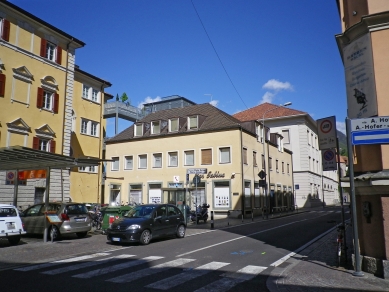 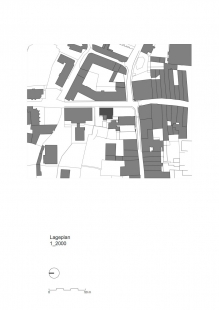 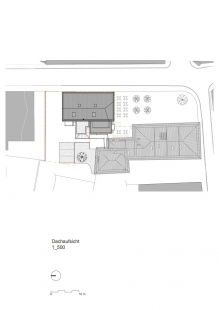 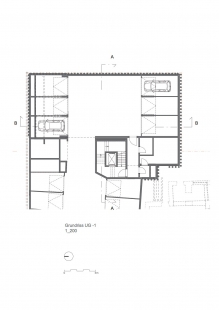 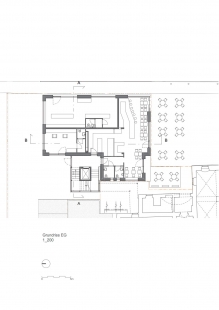 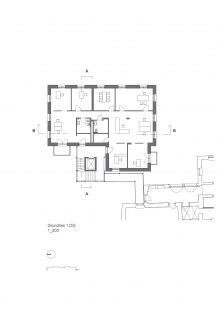 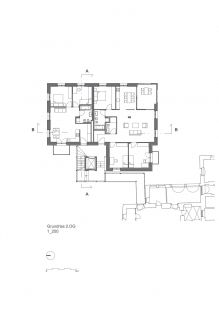 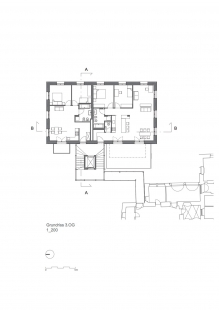 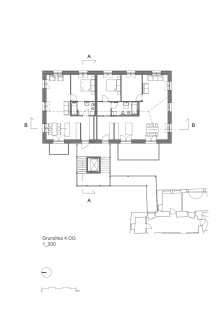 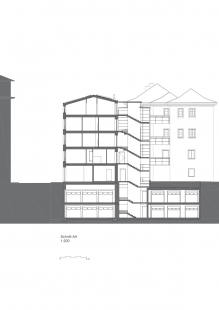 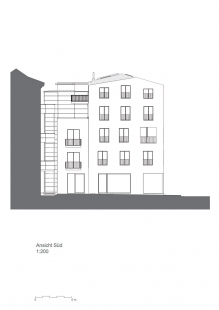 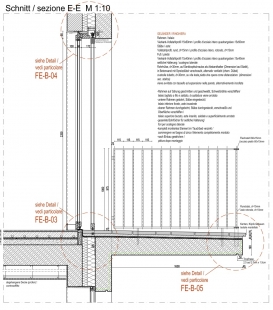