Architecture In The Netherlands
Yearbook 2014/15

900 Kč
Urban transformation
Markthal was a success already before being realised: it is a new and fresh icon which already has attracted large quantities of international press and visitors. The centrally located building is rooted in the city’s history, located parallel to the late medieval ‘Laurenskerk’ (Laurens church) and at the location of the former dike along the river Rotte. This river was diverted at the end of the 19th century in favour of a train line viaduct leading to the south bank of the river Maas. In the 1990’s this trajectory was rebuilt as an underground tunnel and the current oblong square emerged which offers room for the open air fresh food market twice a week. The 1950’s buildings on either side of the old highline suddenly faced the new square with their backsides and have been replaced ever since.
Markthal means an important impulse to its surrounding area which is a strong contribution to the urban economy. Markthal with its daily fresh food market, shops and apartments, creates coherence and connections in the neighbourhood which will reach a new centrality. After completion of Markthal, the city of Rotterdam will start to refurbish Binnenrotte Square to make it more attractive also on days that there is no outdoor market. After the refurbishment the outdoor market will be reconfigured, the market lanes will connect seamlessly to the entrances of Markthal, to allow the public to easily enter and exit the building and to create incentives between the two markets, indoor and outdoor.

Architecture
In October 2004 the team of Provast developers and architecture studio MVRDV won a competition organised by the city of Rotterdam for the design and construction of a market hall at Binnenrotte. The municipality wanted to extend the existing open air market with a covered addition. According to stricter European rules in the future the open air sale of fresh and chilled food would not be permitted anymore. Next to this the municipality wanted to augment the amount of inhabitants in the city centre in order to create more capacity for the services in the area. The demanded programme – housing, parking and a market hall – asked for an obvious solution: two residential slabs with an economically constructible market hall in between. Provast and MVRDV had seen in the South of Europe that these kind of market halls are often dark, introverted buildings with little connection to the surrounding urban area. The Markthal in Rotterdam however was to be an important impulse in the development of the ‘Laurenskwartier’ (Laurens quarter) neighbourhood and had to strengthen the Eastern side of the city centre. A highly public, open building with good accessibility was needed. The team decided to just flip the two slabs and market which led to a larger hall with two wide openings towards the city. In order to make the construction more efficient a curve was chosen that fitted a traditional elevator core. By adding some space to the lower floors for extra retail space the current volume of the arch emerged 120 meters long, 70 meters wide and 40 meters tall.
The building needed to be as open as possible to attract the public and at the same time it had to be closed off due to weather conditions. Keeping the closure as transparent as possible a cable net façade was chosen which needs very few constructive elements. Its principle is comparable to a tennis racket in which the steel cable are used as strings in between which the glass is mounted. This cable net façade is the largest of its kind in Europe. Because of this miracle of engineering the art piece inside is visible from the outside, its lush shapes and colours invite the public to enter the building. The exterior of the Markthal is executed in grey natural stone, the same as on the pavements, to put the emphasis onto the interior.
Markthal is a building without a backside. All sides of the building are accessible or shop windows. The entire supply for the hall, the shops and restaurants is therefore located underground. The first basement floor features an expedition court to which the delivery can happen with vans, from this exhibition court freight elevators reach the market hall. In this way inhabitants are not hindered by distribution activities that often occur in the early hours of the morning. Also in the basement is an Albert Heijn supermarket, Etos and Gall & Gall. The delivery for these stores is organised through an underground tunnel leading to hidden elevators at Binnenrotte square, in this way larger lorries can operate in distance to the hall. Inhabitants have storage rooms and shared bicycle rooms in the basement.
Inhabitants can reach their apartments through six separate entrances leading to elevators and double helix flight stairs. Due to the curve of the structure the elevator hall is gradually - floor by floor – changing in size and location. At the ground floor the elevator is located at the inner façade, at the top floor towards the outer façade. Each elevator hall services a maximum of four apartments, two of which have windows to the market and all have large glass fronts towards the outside.

Sustainability
Markthal received a BREEAM Very Good certificate. The building is connected to city heating and a thermal storage system underneath the building which will also heat and cool a number of adjacent buildings in the surrounding area. The various functions in the building can exchange heat and cold. For the hall itself extensive research was conducted to create a comfortable interior climate with an extremely low energy use. The hall is naturally ventilated, underneath the glass façade fresh air flows in, it rises towards the roof and leaves the hall through ventilation shafts in the roof. This is a thermic system which can function without any installations. A central monitoring system is used to exchange heat and cool between the different programmes, in this way less installations could be used than normal for these programmes. The combination of housing, shopping centre, parking and market hall makes the installation technology more efficient. Inside the market, an information panel illustrates the energy use and CO2 savings of the building. A smart sanitation system is designed to save water.
The design vision of MVRDV describes Markthal as urbanism, the function mix is an integrated design, a 24 hour building which is a public and lasting addition to the city of Rotterdam.
The tenants of Markthal have signed a so called Green Lease Agreement regarding sustainable performance requirements. This covers the use of water, energy, waste and the use of healthy construction material. In this way the sustainable ambition reaches further than just the cask of the building.
An ecologist was invited to improve the ecological value of the inner city location and advised to create space for bats and swifts. On the western façade of the 11th floor are four large bat stays integrated into the façade, on the northern side of the first floor are ten nests for swifts mounted to the wall.

Living
Markthal Rotterdam is a completely new concept, the first building of its kind, a hybrid between market hall and housing. Rotterdam experiences a world-wide scoop with this new urban typology. By using the apartments to create an arch that covers the market a new public building emerges, which could not have been this grand without the housing.
The horse shoe shaped arch of Markthal consists of housing from the third to the eleventh floor, in total 102 rental apartments and 126 apartments for sale. Each apartment has an outside terrace over the full width of the unit and the 24 penthouses on the top floor have – thanks to the arch shape – a very wide roof terrace. The apartments can be accessed via 6 entrances at street level.
Half the apartments has windows to the market, these windows are triple glazed to avoid sound or smell nuisance. There is a broad choice of apartment types, from free layout loft apartments to duplex with multiple bedrooms. The properties vary from 80 to 300 m². The penthouses have their entrances on the tenth floor and inside stairs and room for an elevator to the eleventh floor, in this way the arch of Markthal could be realised without any elevator boxes on the roof. 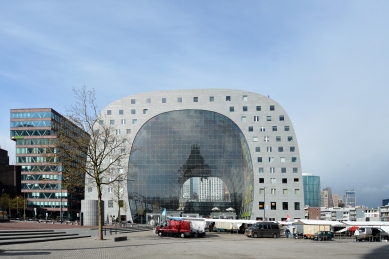 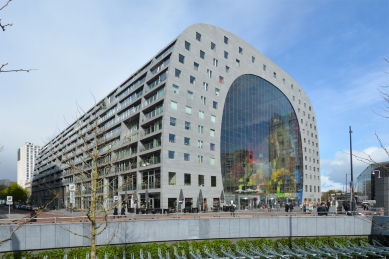 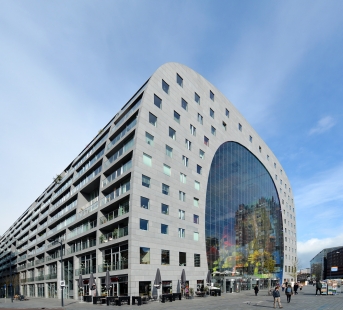 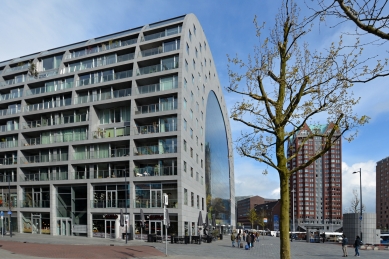 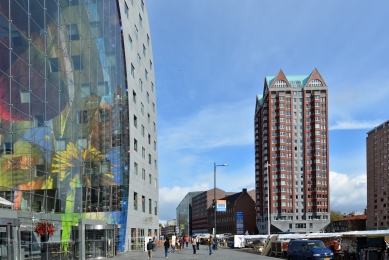 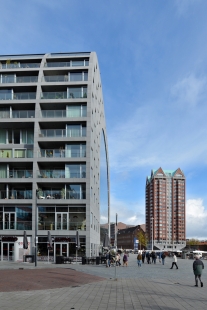 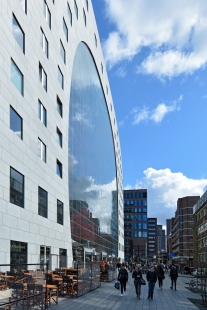 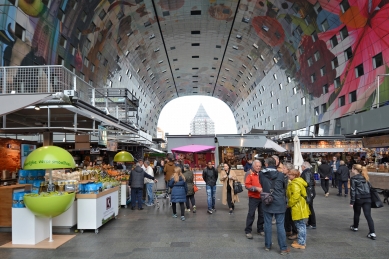 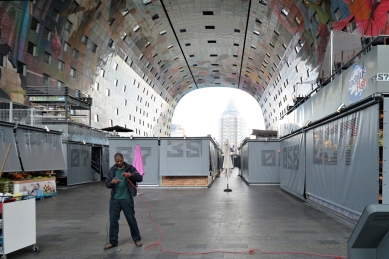 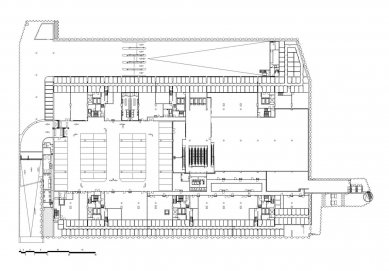 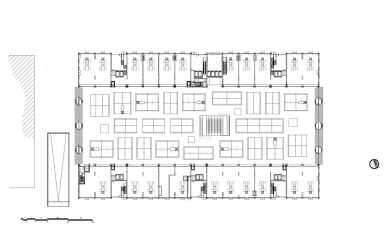 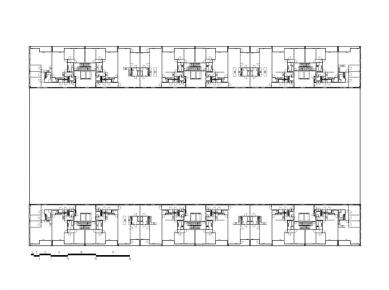 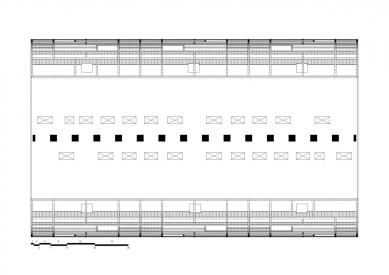 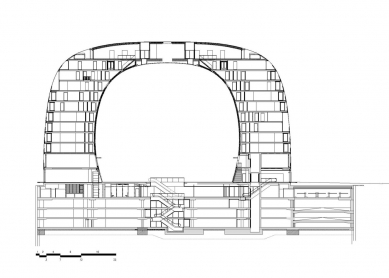 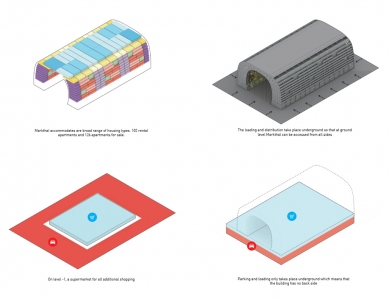