The Hunting Lodge St. Hubertus is located in the north of the Nationalparks De Hoge Veluwe between the cities of Otterlo and Hoenderloo, in the province of Gelderland in the Netherlands. It was commissioned by the Kröller-Müllers, a very wealthy couple, who were influential patrons of the modern art movement in the Netherlands. It was designed by the Dutch architect Hendrik Petrus Berlage. The Kröller-Müllers had already acquired large stretches of land in Hoge Veluwe which they used as a hunting ground when they decided to commission a residence to H.P. Berlage to receive their illustrious guests. Berlage was given plenty of rope to design a large manor-like lodge. He submitted his design in 1914 and the building was completed in 1920.  The St. Hubertus Lodge is entirely made of bricks, some of them are glazed. Berlage did not only design the building itself, but also all interiors and the furniture. The lodge is centred around a high watch tower from which the surrounding landscape can be observed as it were a giant hunting stand. The name Hubertus refers to St. Hubertus, the patron of the hunters. He is depicted in one of the glass windows and the building's floor plan is inspired by the antlers of a deer. The lodge as well as the entire estate of Mr and Mrs Kröller-Müller has been turned into a foundation after their death and is now open to the public. The lodge is sometimes used as a guest house by the Dutch government. 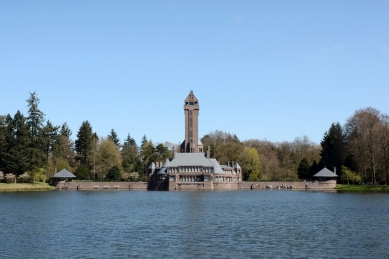 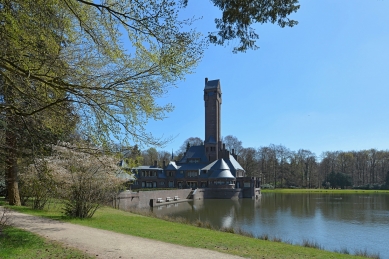 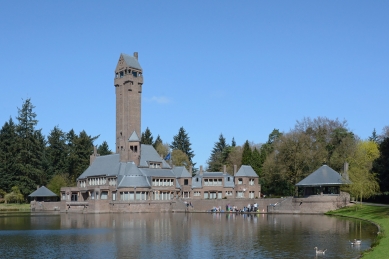 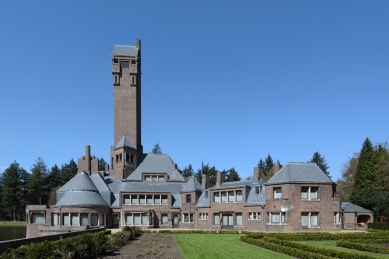