This modest group of 10 row houses built along the Grand Union Canal as is winds through this part of London, is part of a larger redevelopment project for a difficult site in the middle of Camden. The triangular site is defined by major roads on three sides and is further complicated by the existence of a church along the southwestern edge and the canal that passes through the north side of the site. The supermarket is the dominant building on the site and is an example of the innovative steel structure typical to the work of Nicholas Grimshaw and Partners. The program that evolved for the project was the result of the complex interaction of several community groups but included the supermarket, a pre-school, 300 parking spaces, 2000 square meters of office/workshop space and the group of row houses. Ostensibly, Grimshaw was selected to do a high-tech supermarket for Sainsbury and the row houses were included as a gesture to begin to develop housing along the canal.

The site strategy developed around the best position for the supermarket along Camden Road. This long-span, exposed steel structure thus backed up to a large service and parking area along Kentish Town Road on the western edge of the site. The school and office/workshops were built over the parking. The only place left for housing was a long narrow strip along the edge of the service and parking areas that fronted the canal. While the canal and its activity and serenity was a valuable amenity, its location along the truck turn around and parking area and north-facing exposure was less than ideal. The resulting building form was a logical expression of the site; a row of 3 story town houses, backing up with a blank wall to the noise and pollution of the parking and service area, stepping and opening out to the canal, but designed in such a way that sunlight could be admitted to each dwelling. The canal passes underneath Camden Street at the east corner of the market building, passes along the northern edge of the site and flows beneath Kentish Town Road to the locks just south of this point. Thus, various canal vessels periodically move through this waterway and it defines the foreground scene to a distant landscape on the opposite side of the canal that will eventually be terrace housing.

Ten, 3-story row houses back up to a 3 story high, blank corrugated metal wall at the edge of the parking lot and cantilever out over the edge of the canal. These dwellings are reached from a public walkway along the canal bulkhead the level of which is just a few feet below the bottom floor of the town house. Rooms and balconies in the upper floors cantilever out over the walk and there are ladders leading down to the water so that private boats can be periodically moored along the water. The walkway is reached at the western end with a tower element containing stairs and elevators connecting to the street level. In addition to the vertical circulation, the tower element also contains a flat and a maisonette. The row houses back up to the parking wall with a zone of baths, the kitchen, and utility rooms so that the living spaces all look directly out on the canal. The section is organized in typical row house fashion with an entry, bedroom and bath on the lowest level and a stair leading to the living spaces on the main floor with a two-story void and stair connecting to the third level where there are two bedrooms and a bath. The two-story high void of the dining room is expressed on the canal façade as a canted glazed wall running the full height of the top two floors. The lower section of this window is a vertically sliding door that tracks up so that whole dining area can be opened to the terrace overlooking the water. The recessed, canted glass walls of the dining area alternate with convex corrugated metal walls of the living/bedroom resulting in a solid void pattern on the canal façade. The two-story glass walls express the extended vertical volume while the two floors of the other half of the plan are expressed as two levels each with Airstream-type gasketed windows punched from the horizontal corrugated metal wall. Skylights at the top of the dining volume are canted to the south so that some direct sunlight comes into this space that is indirectly shared by the upper bedrooms. Skylights in the ceilings of the upper bedroom and bath provide natural light to the interior rooms of the upper floor that don’t have windows on the south side because of the parking lot.

Grimshaw’s strategy of extending the hi-tech materials and finishes of the supermarket to the parking wall of the row houses and the articulation of the tower entrance as part of the entrance to the service, seem consistent with the overall expression of an industrial architecture. The standard finishes of the interiors, white plaster walls, wood doors, and hardwood floors of the row houses, however, contrast sharply with the high tech materials of the exterior; a traditional row house typology has been adapted to a different condition but then covered with an industrial veneer of materials seemly intended to impart an ambience of technical ingenuity more than a clear statement about the terraced form and typology. The skylights, rolling windows and two-story volumes of dwellings are very innovative ways of compensating for the problems of a north exposure, but this remains a damp, dark prospect and raises questions about the larger site problem of how to front the canal, how to make entrance to the dwellings from the end tower, and the wisdom of including housing in the program at all. The economic trade-offs between the need for supermarkets and the need for housing typically shortchange the housing. Still, the construction of new housing across the canal and the continued maintenance of the lower level of public walkways along with the movement of the boats should result in a remarkable residential enclave in the midst of this chaotic urban landscape. Defining the edge of the canal behind the market was critical to controlling any future construction here. 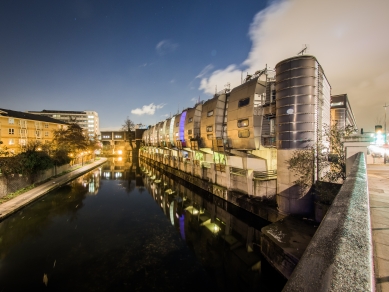 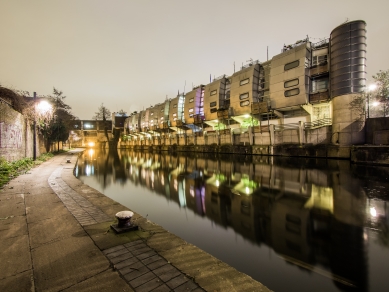 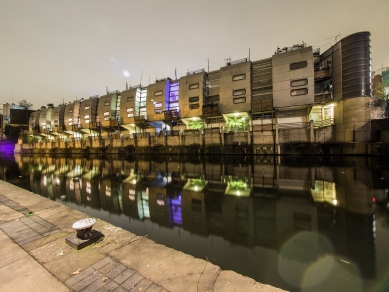 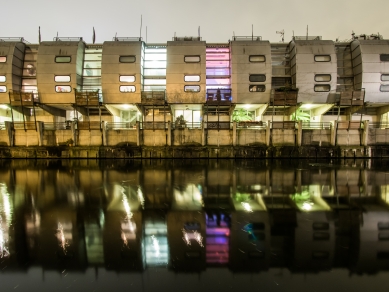 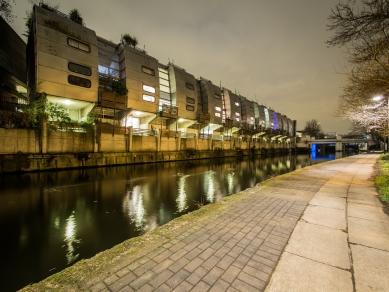 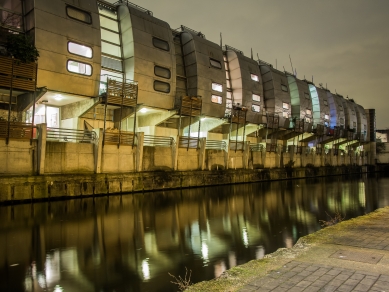 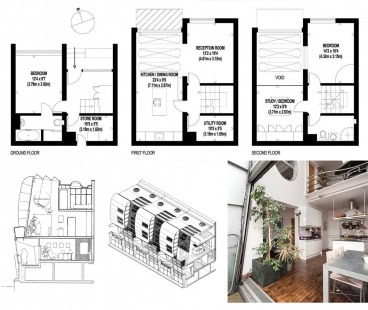