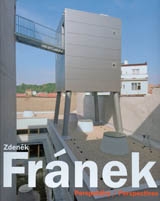 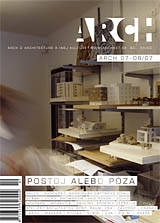 490 Kč
The house with a studio is a sibling of the villa on the Red Hill. Both houses stand on originally just one building site which northern edge forms the Kamenná street and the southern is at the peak of Red Hill. In addition Kamenná street bends dramatically at the building site number 13, therefore the house facing the street creates urbanisticaly attractive point de vue. Architect, the developer of the lower house a brother of the developer of the upper house was well aware of the strength of the genius loci. His variety of expression is rich and much more adaptable to the concrete conditions of the building site than we can see by a majority of Brno architects whose premise was the orthogonal post functionalism.
What the houses have in common, apart from their architectonical attitude, family relations of both developers are many other features and relations. Mainly it is the absolute height of attic gables so that the houses are of the same absolute height. The ground plan shape of the upper house is reflected into the communication centre of the lower one so that we can speak about building genetics. The houses are built by same builders and from the same materials. Therefore they are purebred siblings. For those keen in gender studies there is an interesting thought about the formal similarity of both houses. While the brother's house has a strong vertical character demonstrating an erection to the sky. The sister's house is a horizontal mass with distinctive round shapes.
The house with the studio in Kamenná street belongs to the brother - architect. In difference to the upper one it is multifunctional. Maybe we could speak about a city palace of 21st century. Two lowest floors accommodate the architect's studio. Other four floors are rented even though the owner was supposed to have his apartment on the last two floors.
I think that such a functional composition is unique and definitely it deserves attention. The form of the lower house is reserved and it thoroughly respects surrounding urban structure. The elevated prism behaves modestly. A sculptural body of the communication centre, which is lighted by a gap between the mass of the house and the centre, forms a very distinctive feature. This led to the enhancement of the house entrance. I might have just one reproach to the lay out of the communication centre and that is the intersection of the elevator into the utility space of the floors. But the architect respected the composition of the house and solved this problem by designing a maximally transparent elevator shaft. This on the other hand has created an unusual opportunity to see from the elevator in a short moment of time the activity taking place on all floors of the house. Bata is smiling.
Worth mentioning is also the vertical connection of the two lowest and the two highest floors. The interior of the apartment and the studio shares the same space composition. But while in the apartment the social elevated space with a gallery is opened to the southern sun, in the studio it is under the surface and symbolizes seclusion - meditation - thinking. As if the architect in his free time was inhaling contemporaneousness, respectively as he puts it in his own words "was the acid test of it" and consequently in his quiet secluded studio transformed his experience into architectonical designs.
I have one more remark about the opaque foil on the glass of the ground floor façade. Originally I thought that Zdeněk Fránek wanted to keep the studio absolutely isolated to the world from the very beginning of its functioning. Unfortunately my question about the purpose of the foil was answered very simply. Because he rented one floor in the house to a company distributing cosmetics and organizing model castings, it happened from time to time that the models waiting for the casting would stand and smoke on the pavement in front of the house and the efficiency of the male workers dropped dramatically. Therefore an opaque foil was stuck on the glass and the problem was gone. 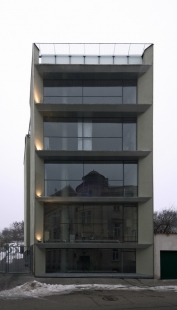 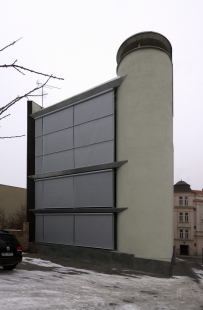 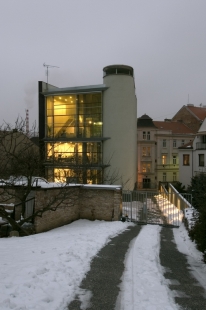 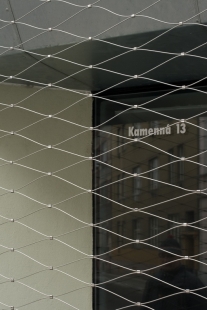 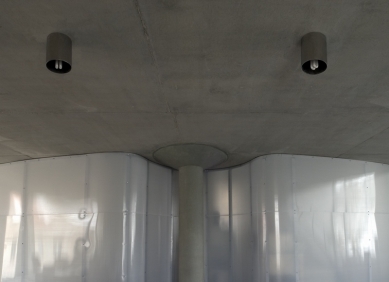 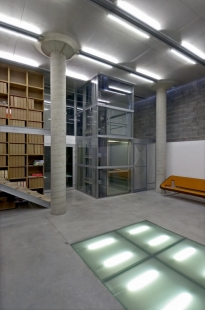