650 Kč
The architectural concept of the house HB was determined by the location of the property on the prominent part of the landscape. The site is extremely picturesque, while being at the same time a typical Slovenian suburban situation, surrounded by accumulation of anonymous cliché two story individual houses, typical of postwar central European architecture. The project attempts to define another kind of domestic environment. The house HB is a redefinition of a specific from of traditional house, of low and elongated rural typology.
The house, situated on top of a low hill, appears like a transparent object rising from the ground. Despite its dominant position, the house seems to merge with the landscape.
At second glance, it also looks like a kind of prototype house, a very basic ‘icon’ of a house as if drawn by a child. The roof and side facades are clad in the same material, aluminium plates, which merge the surfaces together, leaving the house smooth, without any ornamental details. The house appears as a sign, as a model of the house.
The house HB aims to keep iconographic motives of the traditional house such as pitch roof, relatively small volume and linear spatial sequences. But it is more spacious then it appears from the distance. The intimate areas of the house including bedrooms and library are sunken in the terrain, while the living area is located in the visible upper part of the house. The two levels offer quite different living experiences - the lower structure is built in concrete and is oriented towards the hidden patio, while the upper structure is made of glass, entirely transparent along the longer edges of the building.
The open interior has no dividing walls. Different areas like kitchen, dining and living are distinguished by the arrangement of furniture which forms a kind of virtual rooms.
The border between inside and outside is blurred, the inside of the house continuing onto the grass via wooden platforms. The landscape becomes an extension of the living environment. 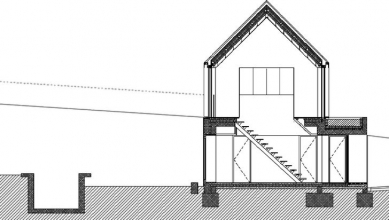