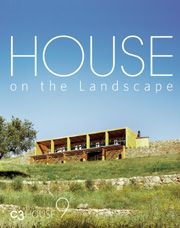 House on the Landscape

1350 Kč
The house is located in a suburban settlement on the outskirts of Ljubljana.
The surrounding area is 'covered' with low-quality single-family houses, most of them built without building permits in the 1960's.
The owners bought the last available plot, a very small area (500m), on the edge of the settlement, facing forest on the northern side.
Therefore the theme of the project became one of 'mediation' – a house as a mediator between the anonymous, chaotic suburbia and the natural surroundings.
The house is conceived as a standard, patio-type house, formed by two wings that 'frame' the garden area. The wings are then split into two levels, to allow for insertion of the carport under the living area. By positioning the house almost on the edge of the site, and by lifting the level of the garden, the need for the fence surrounding the very small plot is eliminated.
The usual 'split' between the living and sleeping areas of the house is reversed, so that the sleeping area occupies the ground level of the house.
It consists of bedrooms and bathrooms for children and parents, which are formed as very small cells that can be joined together by means of series of sliding and folding panels, much like a Japanese house, where boundaries between particular areas become blurred. All of the spaces open up towards the wide corridor-workspace, with a long work surface that naturally extends into the raised grass plateau of the garden.
The main living area of the house is raised from the ground to allow for the sweeping panoramic view of the surrounding forest on the north. The long window on the southern side, raised 2 meters from the level of the room, allows for the sun to enter the room, while limiting the views to the neighbouring houses.
Structurally it is conceived as a 'bridge', spanning over the carport on the ground level.
As a typology, it is an open, loft-type space, very narrow and elongated, contrasting the closeness and compartmentalization of the bedroom area.
So the living room becomes a 'mediating device', a kind of a periscope, catching sunrays on the southern side, and framing the views of the forest on the northern side.
Materially, the whole house is clad in wood – vertical larch wood planks cover all the surfaces, including the pitched roof and the terrace – sun deck.
The only exception are the windows, only four of them in total - very large surfaces that 'contain' all opening and ventilation surfaces as well as all fixed glazing parts. Windows are custom-made, in steel structure with flush glazing. 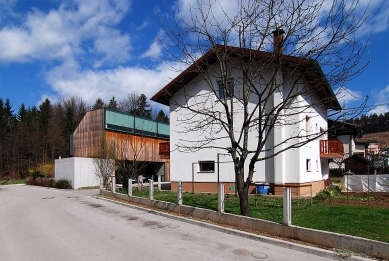 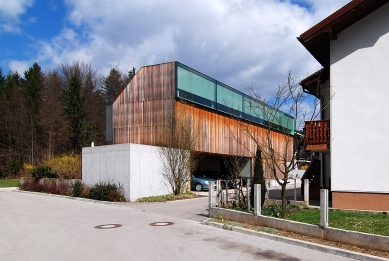 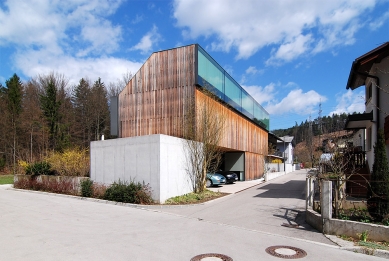 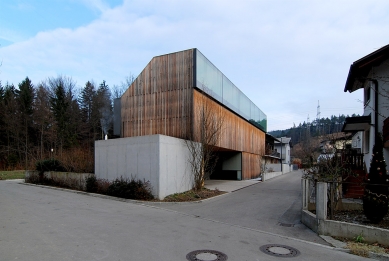 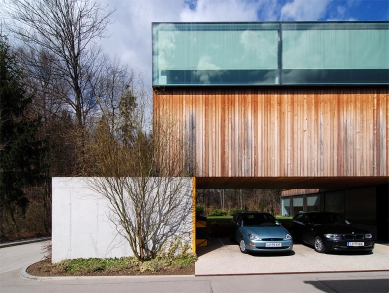 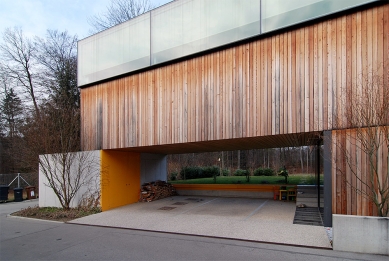 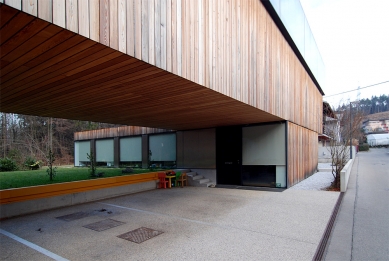 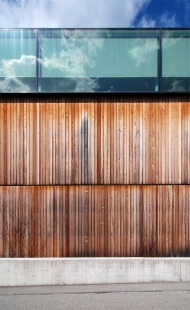 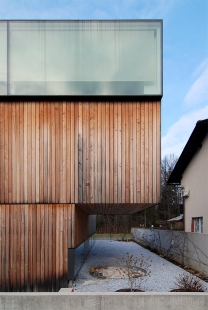 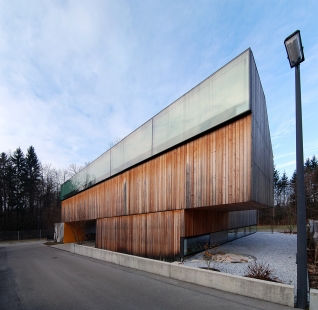 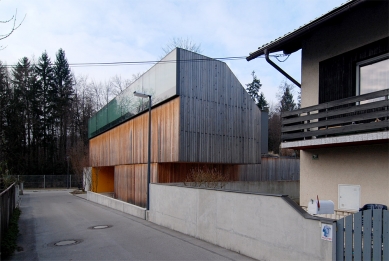 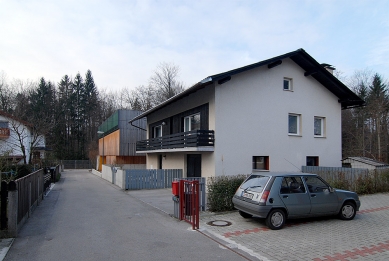 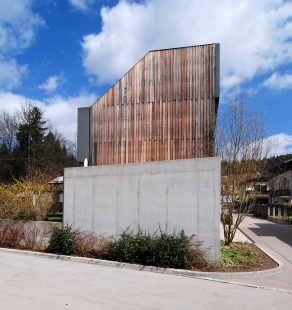 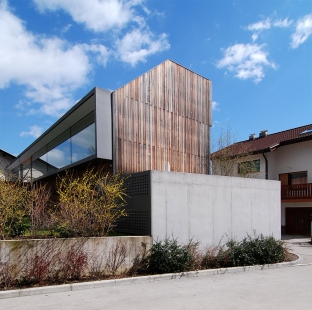 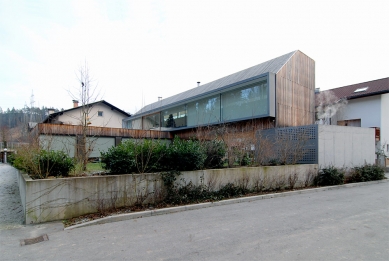 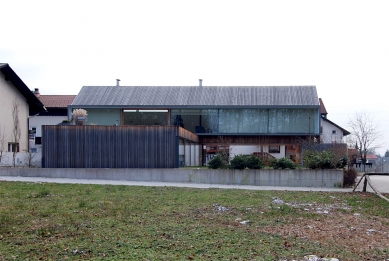 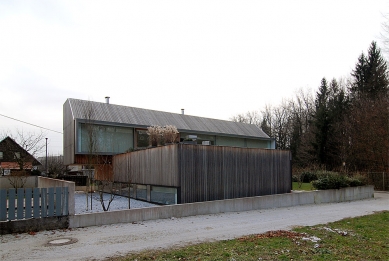 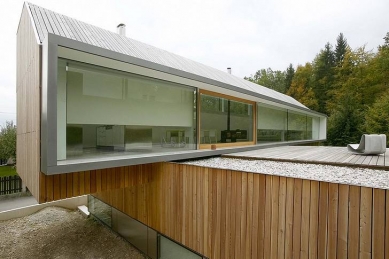 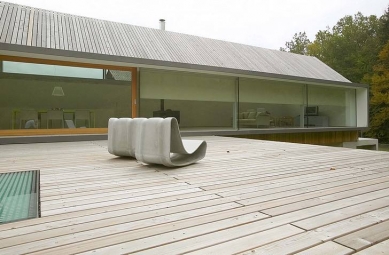 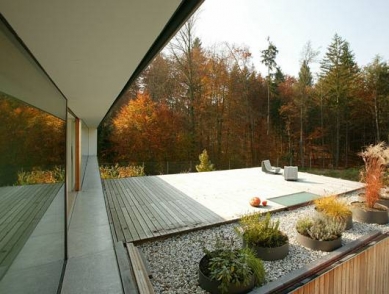 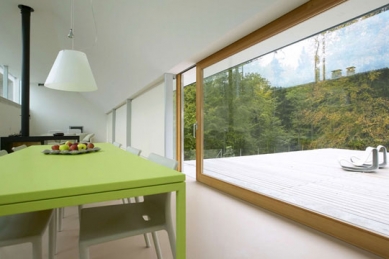 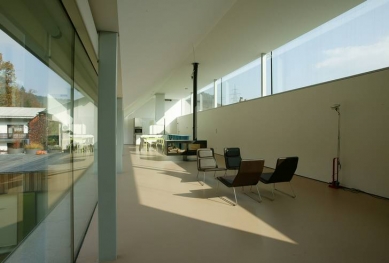 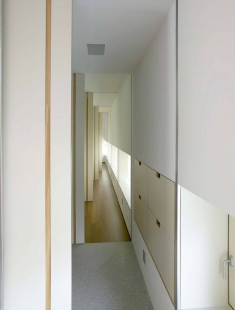 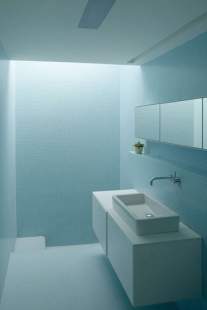 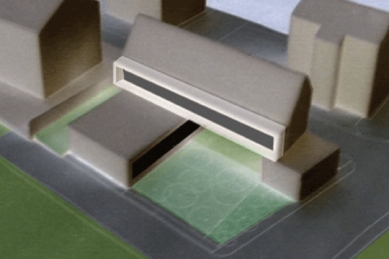 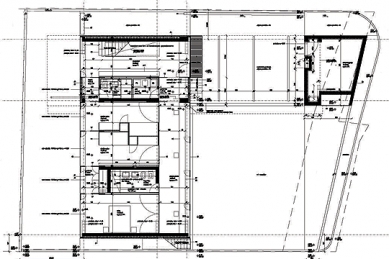 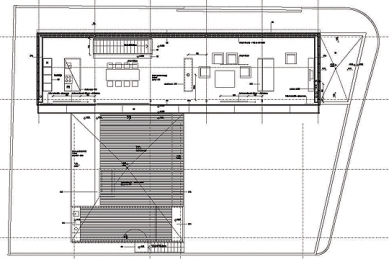 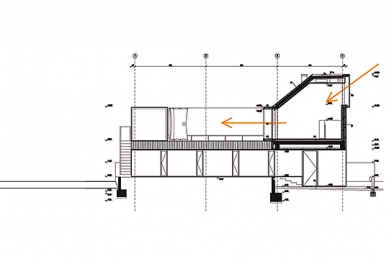 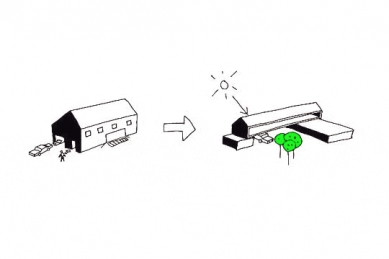