The building began his (her,your) construction with a term very fitted to be able to lodge a Center of Data processing working before the Games of the Mediterranean 2005 that was celebrated in Almeria. The building answers to the project called Digital City, the Center is in use for the automatic regulation of communications and diverse metropolitan facilities in the municipal area almeriense. The Installation gives service also to diverse public and private entities. The program includes, besides the Center a diaphanous plant(floor) closely of 2000 m2. For offices in the top floors. Justification of the adopted Solution
We excavate a ditch to leave a pedestal isolated in the middle of the territory. This basement, you upset perceptibly, secretly as an underground “box”, it(he,she) lodges the Center of Data processing. This interior, economic and succinct volume isolates for the pit, which separates it of his(her,your) exterior(foreign) surrounding cage. The interior is an area, ambiguous, an emptiness that it(he,she) separates, imprisons and muffles the phenomena of the exterior. We fulfill this way the safety requirements and inscrutability of the Center, both in his(her,your) form and in his(her,your) function. His(her,your) cover draws the horizontal platform of concrete that defines a socle regularizador of the differences of the plot. The building constitutes an effective elementary prism on this horizontal platform. A few external ramps allow the rolled and pedestrian access to the basement and he(she) communicates them with the exterior(foreign) parking.
In the ground, diaphanous floor initially, only the accesses and stairs are closed towards the basement or the first plant(floor). This ground floor, opened totally, acts as land of nobody, contributing, in vertically, the necessary isolation: an empty appellant and “unfinished” that is opened, I clean, towards four fronts. The horizontal closing of around provides a deep ditch perimetral, that is saved by four bridges of link by the exterior.
In the top level one arranges a space of rectangular plant(floor) for offices. The large windows, and walls curtain of the front, omit retranqueos and projections. Totally opened on the outside, diaphanous to assume the flexible utilization of the available space with diverse possibilities of compartimentación and functional structure. The modules, which will occupy the perimeter of the rectangle, will allow to transform the area with the time. This place of work, separated from the area, allows the sights, across the lattice – exterior(foreign) cage – on Alborán’s Park and the nearby Mediterranean. The offices float as viewing-point wrapped(involved) in the filter of solar intermediation that the preteje.
A peculiar metallic lattice wraps everything: the ” box of information “, the pedestal and the offices. We design the cage as front that limits the exterior(foreign) edge of the pit and raise a metallic accumulation of profiles, carpentries of aluminium and sheets perforated of diverse colors, which works like surrounding protective of the solar radiation and of the strong light of the coast. A metallic recycling, which one endures as a protective orthogonal and transparent sieve and constitutes Faraday’s peculiar cage. A box which walls of conductive material, as Michael Faraday’s metallic enclosure, manage to annul the electrical field to demonstrate the electromagnetic phenomena. Our metallic network(net), of random paces it(he,she) solves the external image of the building that appears concealing his(her,your) internal volume, as the quite constructed one for a uniform model of irregular lattice, provided with an intense vibration.
This way a conventional prism appears, thanks to the collage that it represents in his(her,your) external image, as an enigmatic appearance, an architecture of transparent levity, as if a cage of electrical conductions(drivings) had fallen down on the sand of the Mediterranean one, covering an emptiness of a confused interior precisely for being an emptiness. Why does it(he,she) serve a viewing-point on the sea? Environmental and climatic factors. The Toyo, it is a new urban, residential and tourist complex opened for the Mediterranean and near to the airport of Almeria, which is outlined as attractive zone of regeneration and transformation. A new city of real estate and equipments(equipping) with the most advanced technology.
The action(performance) is realized on a lot trapecial overturned towards the south, which follows(continues) a light(slight) slope towards the sea, nearby and visibly. Towards the west there is opened the wooded zone of Alborán’s new Park, and to the bottom(fund) Almeria. These peculiar conditions and the dazzling, own(proper) light of the midday formalized the idea of the project. Constructive and structural general characteristics A box of armed concrete got in the area. A pit perimetral with walls of concrete. Three forged reticulated on props(pillars): rectangles on squares. A perimeter of wall curtain glazed on the sea. A lattice composed by frames standardized of aluminium in different ended of color and plates perforated of diverse textures.
The Center of Information supports a continued use of the building. The materials concrete, crystal and aluminium facilitate a certain permanence opposite to the marine environment. There existed a will to use materials and constructive elements, technology(skill) and economically according to the succinct concept of the offer, his(her,your) situation and emplacement; and the term of execution of the works that was necessary to execute in five months. There is no place for the ostentation. And everything optimizing the functional surface and clarifying the structural execution to achieve the major constructive economy and rapidity. 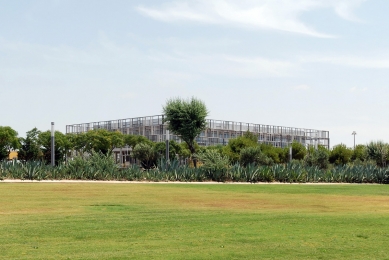 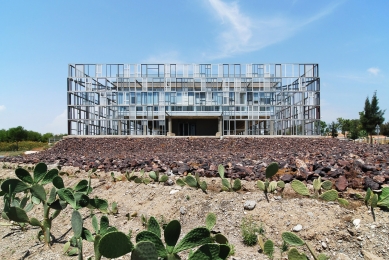 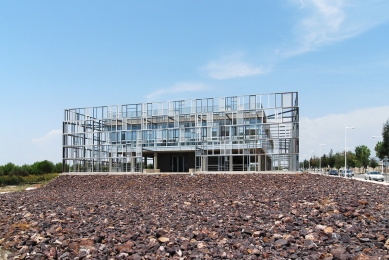 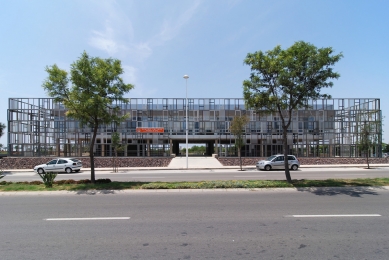 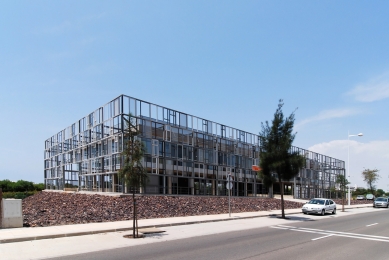 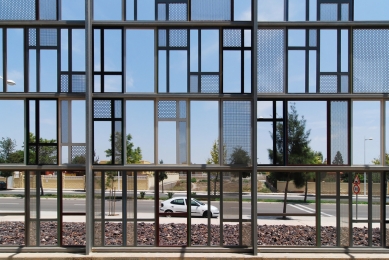 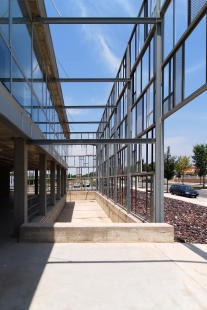 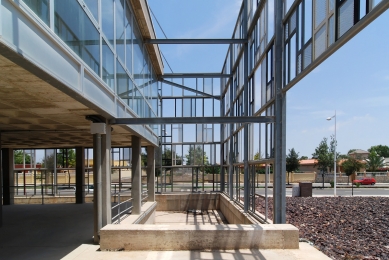 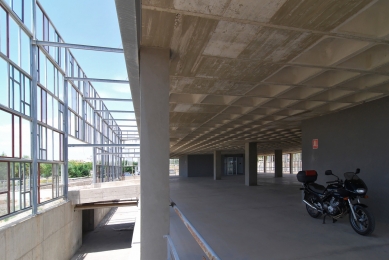 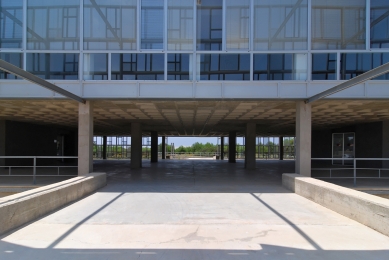 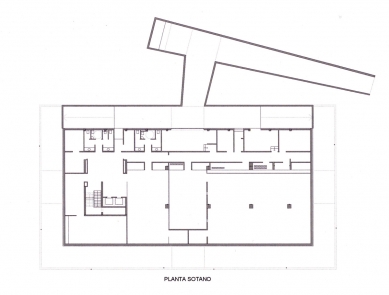 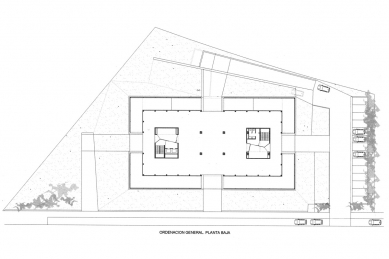 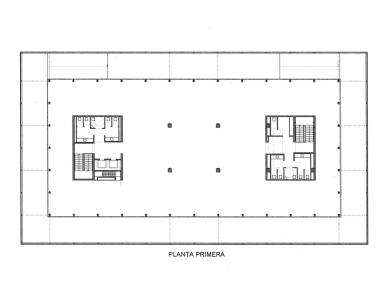 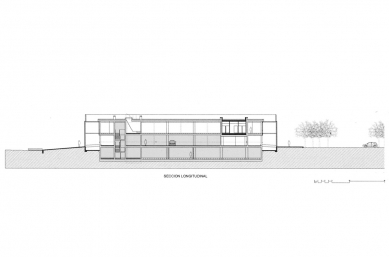 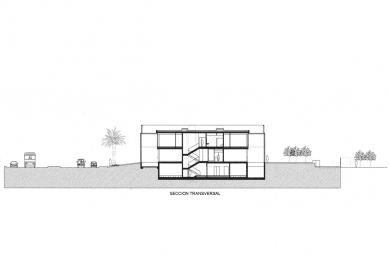 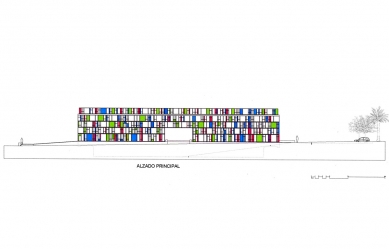 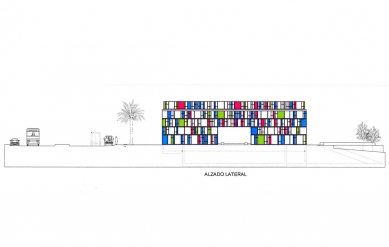