Academy of Arts Architecture and Design in Prague
Production
: Studio of Architecture III
Design and development
: Veronika Miškovičová, Ivan Olontsev, Mai Minh Thanh, Záviš Unzeitig
Photography: Peter Kolarčik
CoEx (as in Controlled Expansion) is an installation,  which questions the borders between an architecture and a sculpture, an interior and an exterior, a material research and a spatial exploration. A part of an exhibition that will run at the Ventura Lambrate zone during Milan Design Week – Salone Del Mobile 2018, it presents innovative forms of architecture and new ways of thinking about the discipline. Based on an academic research project carried out by the Studio of Architecture III at the Academy of Arts, Architecture and Design in Prague, the exhibition aims to establish a common relation between design, objects, spaces and architecture using contemporary and state-of-the-art digital design tools. These tools are helpful in evaluating the various design methods and materials currently used in architectural practice. At a time of radical cultural and technological change, the future has never seemed more present. Architecture is now embracing a new reality.
Featuring an interior with no exterior, CoEx is a speculative re-imagining of how we think about architectural spaces. The concept of the an interior with no exterior has been interpreted in various ways by contemporary architects, as seen for example in Christian Kerez’s research project presented at the Swiss pavilion as part of the architectural biennale in Venice in 2016 and in Paper Cave by Studio Greg Lynn from Vienna’s University of Applied Arts. CoEx is a versatile installation that delivers a tactile, acoustic and visual experience.
The material concept behind the project is defined by a constant feedback between a rigid framework of predesigned paper elements and unpredictable behaviour of PUR-foam expansion. The rigidity of the framework of predesigned paper elements is substituted by a controlled yet imprecise character of a foam.  The paper is not limiting the emergent character of the foam behaviour, yet it allows authors to guide and direct it. The process of expansion is at the same time a process, during which a liquid foam infill within a rigid paper surface is transformed into a stiff structural core. This transformation is essential for an overall morphology of the installation, which is based on cantilevered succession of truncated octahedrons and refers to the late modernist aesthetics, as well as to the semi-fluid and imprecise micro-scale of the "cave" with its stalagmites and stalactites.
CoEx represents a material counterpoint to digitally generated forms. One can view it as material response to digital design methods or digital objects designed using material tools. It replaces the logic of the algorithm with the logic of the material and explores the ways in which designers can use the natural intelligence of materials for their own benefit. 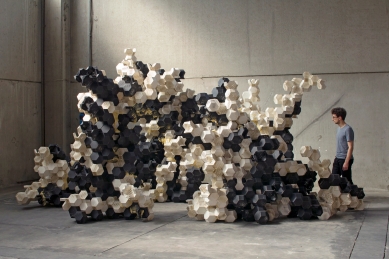 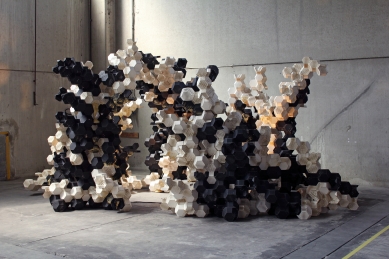 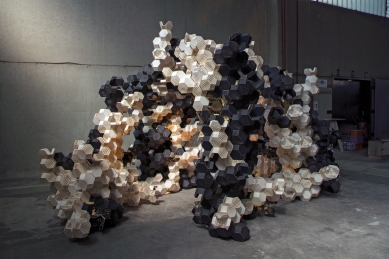 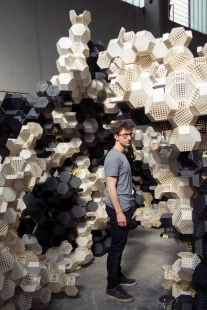 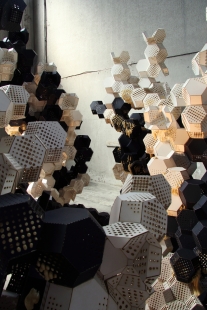 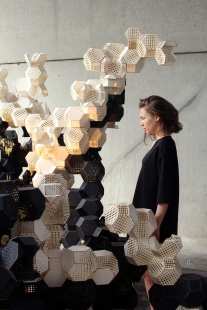 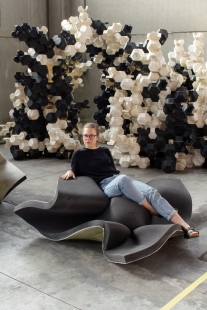 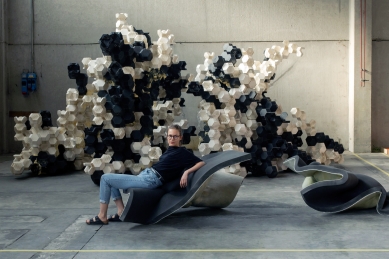