Completed in 2004, the Greenwich Street Project by Archi-tectonics is a 64,000 square foot multi-unit residential building in New York just a few blocks from where the Hudson River meets the city. With the West Village to its north, SoHo, the heart of style to its West, and TriBeCa, where entrenpreneurship has transformed industry into lofts to its south, the Greenwich Street Project is the meeting point of three of downtown’s major cultural districts. Ironically enough, its design also involved the merging of an old renovated warehouse with a completely new structure, combining both to create appropriate live-work spaces that served its context.
The project began with the renovation of an abandoned six-story warehouse and the challenge to connect it with a completely new modern building, bringing the warehouse back to life with residential living spaces, an art gallery, a gym, spa, screening room, wine cellar, and a duplex penthouse apartment. Archi-tectonics obtained approval from the New York City Board of Standards and Appreals for a change of use for the warehouse to residential occupany, and the design solution became an eleven-story glass structure that wrapped itself around the old brick warehouse, integrating the past with the present.

A row of balconies in between the two buildings became important to the design, as the architects envisioned it as a crease between the old and the new. This convergence point also became the main circulation core, creating an interactive environment within the building itself at the heart of the Archi-tectonic’s concept, and also with the street and private residential life through the use of the balconies.

The program is divided in section with the more public spaces, such as the gallery on the ground level to attract local residents like the many artists in SoHo, and continuing with the condominiums  on the higher floors. The most private are two duplex penthouse units on the last two floors of the building with their own roof terraces. The regular units are horizontal loft spaces eleven feet in height that juxtapose the vertically programmed building. The only walls in these units block off the bathroom, and some have fireplaces and terraces depending on the unit.
When permission was given to use the lot for housing, variances for setbacks had to be taken into consideration. Archi-tectonics approached this curtain wall with operable windows that was designed so that “the horizontal plane of the traditional urban fabric is replaced with a diagonal surface that bifurcates the facade. It integrates the strict building setback codes into a new, vertical landscape that folds and twists as it ascends affording different vistas to each interior.” The materials for the curtain wall were horizontal aluminum fins, double glazing with blue-green glass, and free standing steel vertical columns. At the street level the facade inverts towards the building, creating a welcoming entry.

The Greenwich Street project was successful in creating a transition from the street, to a public interior space, leading up through a central core into the private units. The loft spaces of the old warehouse were brought into the new structure to create spacious live-work units that serve the artistic community around it, and achieving a connection with the past and the present for both residents in the interior and visitors through the exterior. 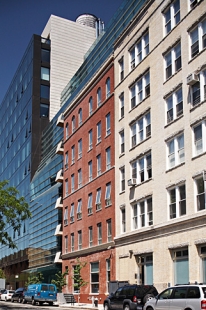 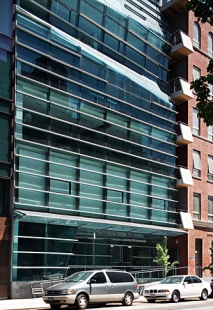 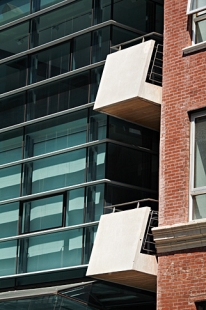 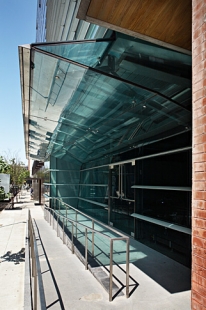 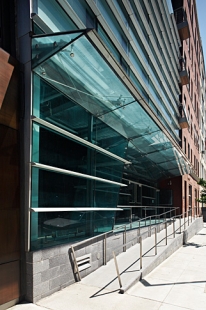 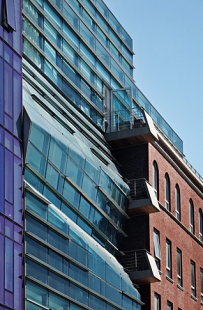 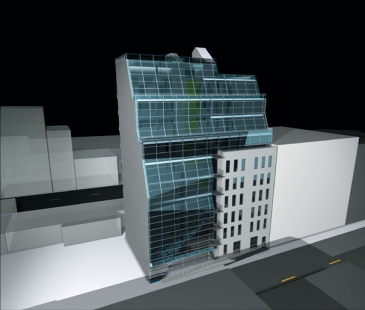 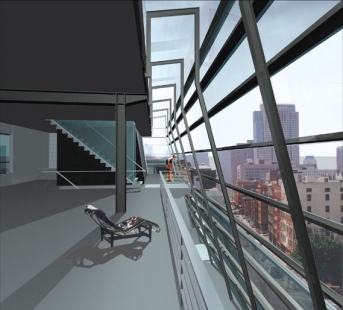 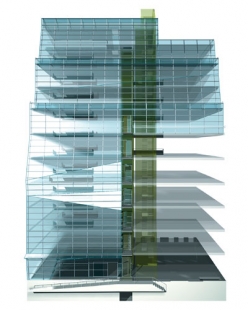 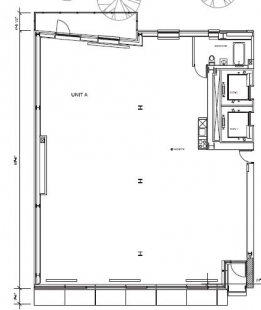 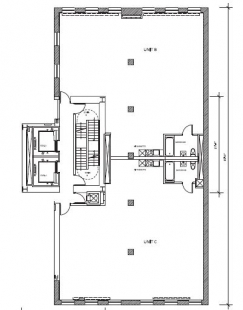