Koog aan de Zaan is a sweet little village near Amsterdam. It is located at the river Zaan. In the early seventies a new Freeway was constructed. In order to cross the river Highway A8 was build on columns. The new road crosses town in a fascinating way. It produced a brutal cut in the urban tissue. Ironically, progress has resulted here in a radical separation between the Church and the State: on one side of the elevated highway is a Chapel and on the other the former City Hall. The columns are about seven meters high. The space under the deck is strangely monumental: a stretched cathedral.
The project is an attempt to restore the connection between both sides of town and to activate the space under the road. After being treated for more than 30 years as a blind spot finally the momentum was there to change things for the better.
The passive attitude of the past decades was replaced with the quest for optimistic interventions. Finally there seemed to be a new mindset: instead of a disaster, the remarkable space under the road was now considered an opportunity. Maybe a new type of urban life could be accommodated here: from desolate parking lot to mixed use area, from wasteland to focal point, from ‘down town periphery’ to center.
The wishes and suggestions of the community are laid down in a document called A8ernA. The locals –from residents to retailers and from young to old- came up with numerous proposals that were used as the starting point for the renewal among which a supermarket, a flower and a fish shop, parking spaces for 120 cars, a better connection to the river, a ‘park’ and a so-called ‘graffiti gallery’. (The idea was that by allowing graffiti in one area, it would be easier to ban it from another). A Shooting Range already nestled under the off ramp. The plan was developed in close collaboration with the local government and the population.
Under the road from west to east you’ll find ‘loveseats’, a skate bowl, the so-called ‘Ramp Scape’ and Toy Area, a Break Dance Stage, table soccer, a soccer field, a basketball pitch, parking, a cross street, the covered square with the supermarket, ‘letter columns’, the flower and fish shop, a light fountain, another cross street, a sculptural bus stop, a mini-marina, the ‘panorama deck’ and the River. Next to the highway is a small park with some hills that intensify the experience of the greenery. Carved out from these are a ‘barbecue cave’ and a soccer cage.
Design and engineering company Carve developed the sophisticated skate park that features a ‘Mickey Mouse’ shaped bowl. The pool is a kind of excavated blob that sits under the highway. It is build up from polystyrene blocks that are sliced by computer-controlled foam cutter and sprayed over with concrete. This is a relatively new technology that allows incredible freedom in design.
The supermarket is clad in customized corrugated steel plates. The wavy panels were engineered with Prince Cladding and span from top to bottom in one stretch, over six meters. The intensified folding allows for extra stability. And it hopefully discourages application of graffiti.
Redundant greenery was removed from the square in front of the Church that as such became much more attractive and usable. Markets and fairs can take place now and on Queens day for instance it becomes a lively hangout. On the square, the original city plan is highlighted in a lighter brick and articulates in a Dogville kind of way the configuration of houses that used to be here. Wooden plateaus indicate the position of former living rooms.
The dense construction along the riverbanks prevents public interaction with the River Zaan. By introducing the mini harbor that is excavated from the land under the highway, the river connects to Main Street. It projects lively reflections onto the ‘ceiling’. A jetty allows access to the first two columns in the stream. The Panorama Deck features wonderful views over the river. In an unexpected way the elevated highway offers the opportunity to reconnect the village to the source of its existence. 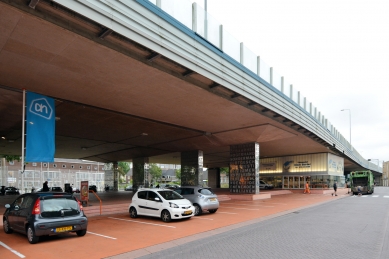 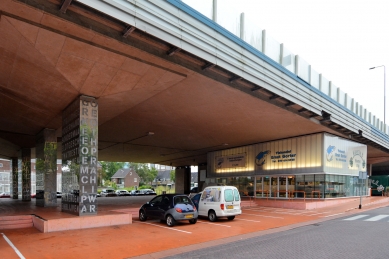 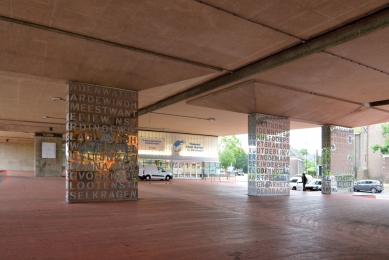 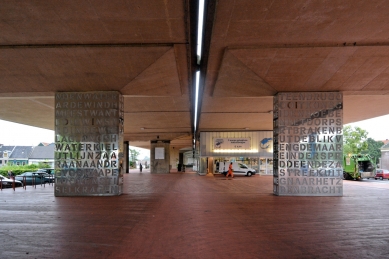 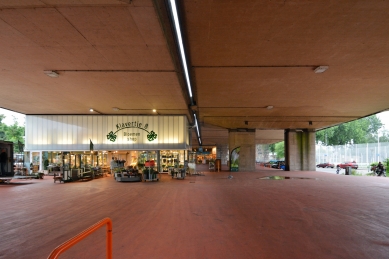 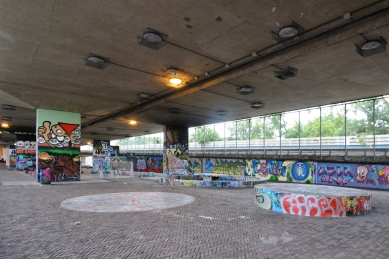 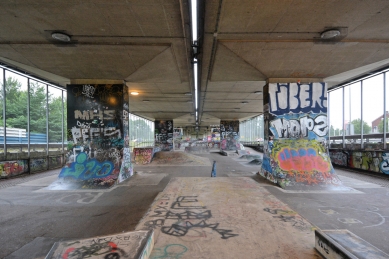 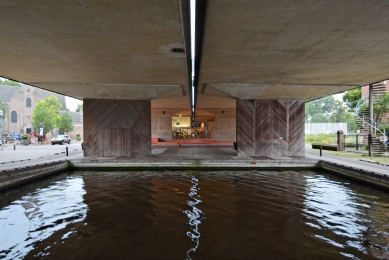 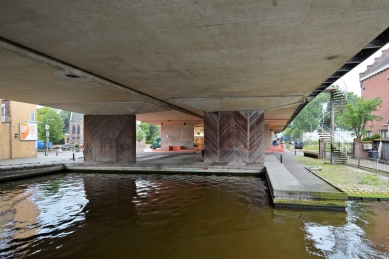 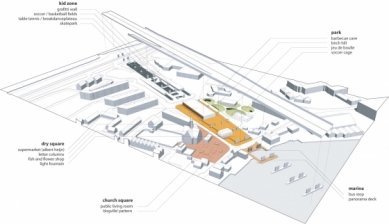